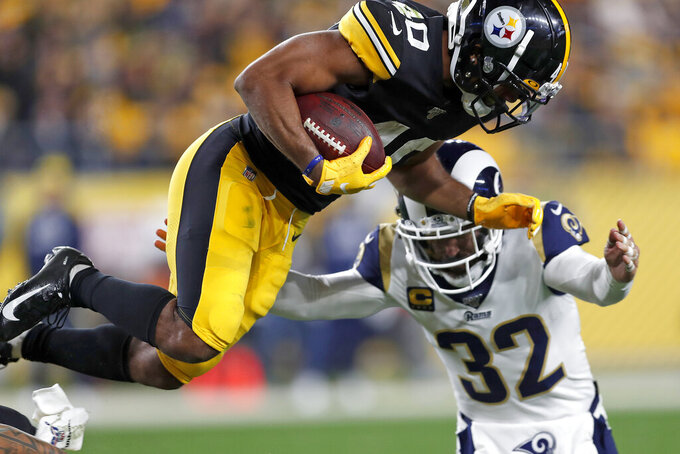 FILE - In this Nov. 10, 2019, file photo, Los Angeles Rams free safety Eric Weddle (32) tackles Pittsburgh Steelers running back Tony Brooks-James during the second half of an NFL football game in Pittsburgh. The Rams' veteran safety spent the previous three seasons with the Baltimore Ravens, but he is declining to give any inside information about his former team to the Rams ahead of the Ravens’ visit to the Coliseum on Monday night. “I could tell them a lot of stuff,” Weddle said Wednesday, Nov. 20. “But that's just not who I am.” (AP Photo/Keith Srakocic, File)

THOUSAND OAKS, Calif. (AP) — Eric Weddle has decided he isn’t the type to play and tell.

The Los Angeles Rams’ veteran safety spent the previous three seasons with the Baltimore Ravens, but he is declining to give any inside information about his former team to the Rams ahead of the Ravens’ visit to the Coliseum on Monday night.

“I could tell them a lot of stuff,” Weddle said Wednesday. “But that's just not who I am.”

Weddle attributes his stance to his loyalty to the players and coaches with whom he spent the past three years. Weddle started all 49 games of his tenure in Baltimore, earning three straight Pro Bowl selections and making 10 interceptions while serving as a defensive leader.

The Ravens surprisingly released Weddle in March instead of honoring the final year of a contract that could have been worth $7.5 million this season. But the 13-year NFL veteran apparently didn’t take it personally enough to provide any inside information that he would consider a betrayal.

“I have a lot of respect for that place, for not only how it helped my career and how it rejuvenated my career, but how they treated myself and my family,” Weddle said. “It’s a very tight-knit group. And what would I be, what kind of man would I be, if I just turned my back on all them?”

The Rams (6-4) could use all the help they can get in their attempt to slow down Lamar Jackson and the Ravens (8-2), who have been one of the NFL’s best teams during their six-game winning streak. They won’t be getting any from Weddle, who apparently told the Rams about his decision earlier in the year.

“He’s got a lot of loyalty to those guys, even if he’s not there anymore,” coach Sean McVay said. “Those are things that I think he would probably say, ‘Hey, I like talking ball with you, but I don’t want to do something that takes away from his ability to try to unfairly give information with the Ravens.’ I know that’s something that he’s communicated. I haven’t talked to him about it.”

McVay and the Rams don’t seem upset about Weddle’s reluctance to bolster their scouting report. While many released players can’t wait to spill inside information about tendencies and preferences from their former team, McVay says he respects Weddle’s decision.

“It’s totally at each person’s individual approach,” McVay said. “With his reasoning, I think it’s a small demonstration of why he’s a special guy. But we’ll talk some ball. We’ve talked before.”

McVay added with a sly smile: “Maybe I already asked those questions in the free agent visit. He just didn’t realize it.”

Weddle is still in group text chains with some Ravens players, but the team has moved on without him. He was replaced as the Ravens’ free safety by Earl Thomas, who has two interceptions and 30 tackles while starting all 10 games of his first season in Baltimore.

After Tony Clark tore a knee ligament in early October, the Ravens promoted Chuck Clark to the other starting safety spot. Weddle and Clark still exchange texts regularly, although they hadn’t done it yet this week.

NOTES: WR Brandin Cooks is still expected to play Monday after missing two games with his second concussion of the season. He hasn’t played since getting hurt Oct. 27. ... WR Robert Woods remained away from the team Wednesday while dealing with the undisclosed personal matter that forced him to miss last Sunday’s game. McVay doesn’t know how long Woods will be away, but the coach believes Woods could play even if he doesn’t get significant practice time. ... Rams offensive line coach Aaron Kromer gave strong praise to rookie offensive linemen David Edwards and Bobby Evans and new trade acquisition Austin Corbett after reviewing their performances as untested starters last week against Chicago. Kromer particularly praised Edwards, the Rams’ new starting right guard: “I didn’t know (whether) he had enough football knowledge, within the NFL schemes and the NFL defenses, if he could go in and have success. He was forced into action with injury and has done a solid job, and he’s earned a spot. Shoot, it’s going to be hard to get that spot away from him.”