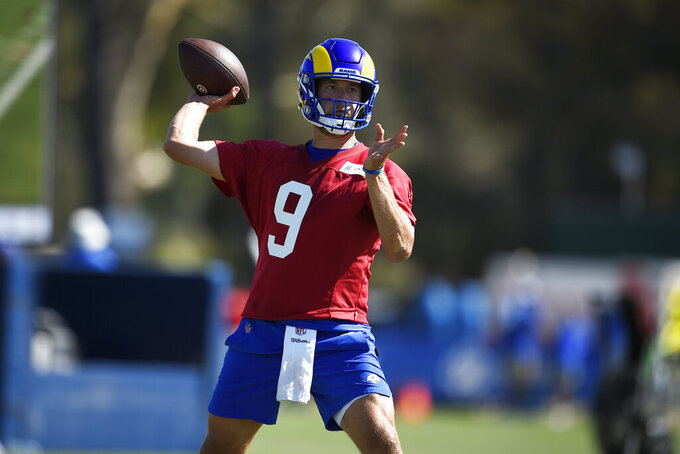 IRVINE, Calif. (AP) — A piece of white tape wrapped around the base of his right thumb and a tan bandage on its joint were the only signs Tuesday that Los Angeles Rams quarterback Matthew Stafford had left practice early the previous day after hitting his throwing hand on a helmet.

Stafford was back in action, much to the surprise — and relief — of coach Sean McVay.

“Earlier today we were planning on him not practicing, and then he came out and he said, ‘No, I’m practicing.’ OK, you want to practice? Let’s go,” McVay said.

Stafford bruised his thumb Monday. X-rays did not show any fractures, and there were no indications of torn muscles, McVay said.

It's the same thumb Stafford had surgery on earlier this year after playing with a partially torn ulnar collateral ligament last season.

“Thumb kind of went numb when you get hit like that sometimes, so just was kind of unsure what was going on,” Stafford said. “And then our training staff and doctors and everybody checked it out, and nothing’s broken or fractured or torn, so just kind of worked on it through the night to try and get it ready to practice today. Felt good enough, so we came out and practiced.”

McVay would have been fine allowing Stafford to rest if he didn’t feel comfortable throwing. However, Stafford said it was important to participate in the first workout in full pads after being acquired in a trade from Detroit in March.

There were no signs of discomfort as Stafford completed a pass that traveled more than 50 yards in the air to DeSean Jackson. He also had long completions to Robert Woods and Cooper Kupp.

Other than a late interception by defensive back Nick Scott, which Stafford described as “as good a play as I’ve been around at the safety spot,” McVay was pleased with how the veteran performed, even if he wasn’t feeling his best.

“He certainly probably isn’t going to say anything, but he was able to throw the ball really well and made a lot of big-time plays today and got a bunch of good quality reps,” McVay said.

Stafford's quick return can only help his reputation in the Rams' locker room after LA acquired him in the offseason from Detroit for Jared Goff, two first-round draft picks and a third-round selection.

Defensive tackle Aaron Donald had been pestering Stafford during a walkthrough earlier in the day to move his thumb as confirmation there had been no serious injury. Stafford played along, and then he provided confirmation during practice.

NOTES: Offensive line coach Kevin Carberry is expected to clear COVID-19 protocol and rejoin the team Wednesday. ... Rookie WR Tutu Atwell could come off the COVID-19 reserve list as early as Wednesday. Atwell, who was drafted 57th overall in the second round, will be slowly integrated into practice, McVay said. ... LT Andrew Whitworth was held out of practice to rest.