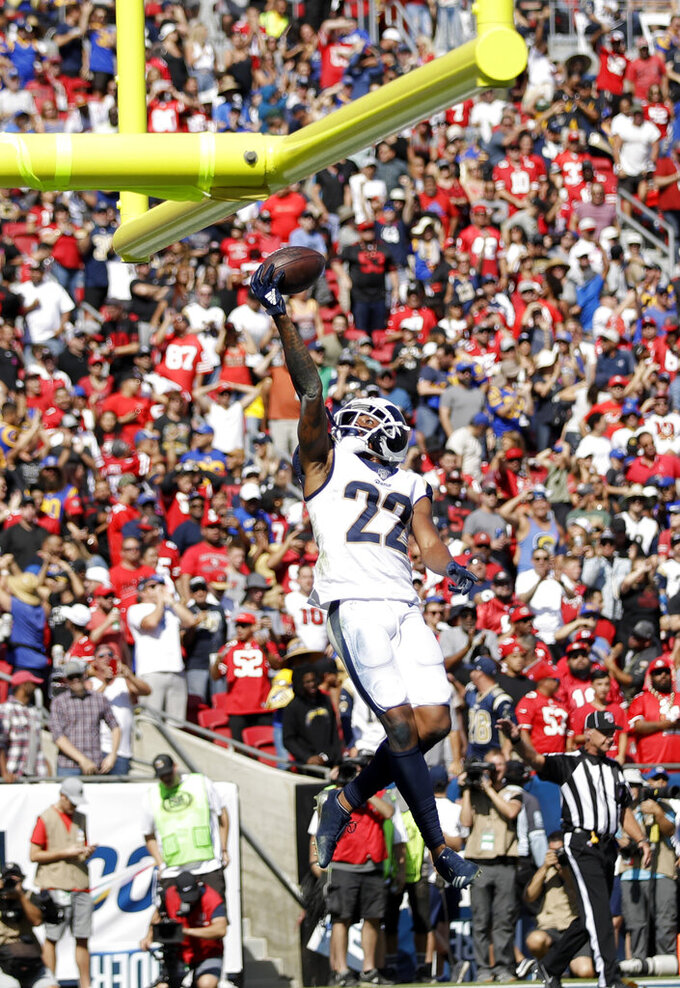 Los Angeles Rams cornerback Marcus Peters (22) jumps after intercepting a pass in the end zone during the first half of an NFL football game against the San Francisco 49ers Sunday, Oct. 13, 2019, in Los Angeles. (AP Photo/Alex Gallardo)

THOUSAND OAKS, Calif. (AP) — The Los Angeles Rams traded cornerback Marcus Peters to the Baltimore Ravens on Tuesday for linebacker Kenny Young and an undisclosed pick in the 2020 draft.

Peters has been a starting cornerback for the Rams since they acquired him from Kansas City before last season, taking on important assignments against opponents' top receivers. The two-time Pro Bowl selection has five interceptions in 22 games since joining Los Angeles.

But Peters' rookie contract expires at the end of the year, and the defending NFC champions declined to sign their Super Bowl starter to an extension before the start of this season. One day after fellow starting cornerback Aqib Talib went on injured reserve , the Rams (3-3) have given up on Peters entirely, throwing their secondary into further upheaval.

Los Angeles has lost three consecutive games for the first time under coach Sean McVay, and though the offense has struggled much more than the defense, Peters' departure qualifies as a shake-up. The Rams also made a trade with Cleveland for offensive lineman Austin Corbett, a possible replacement for Joe Noteboom after the left guard's season-ending right knee injury two days ago.

Talib is out for at least eight weeks, and the Rams don't have a clear, comparable replacement for either cornerback.

Peters lands with the Ravens, who desperately need quality help in their secondary. They'll also have to decide whether Peters is worth signing to a long-term deal.

In all, Baltimore has had six defensive backs on injured reserve, including safety Tony Jefferson. Rookie cornerback Iman Marshall of USC is eligible to return in Week 9.

Young has started three of the Ravens' five games this season, making 11 tackles. The UCLA product fell out of favor in the Ravens' past two games, sitting as a healthy scratch two weeks ago and playing just six snaps on special teams last weekend against Cincinnati.

The Rams also lack depth at inside linebacker, where they haven't found a strong replacement for departed Super Bowl starter Mark Barron. Youngsters Bryce Hager and Troy Reeder have filled in after Micah Kiser was lost indefinitely with a pectoral injury in August.