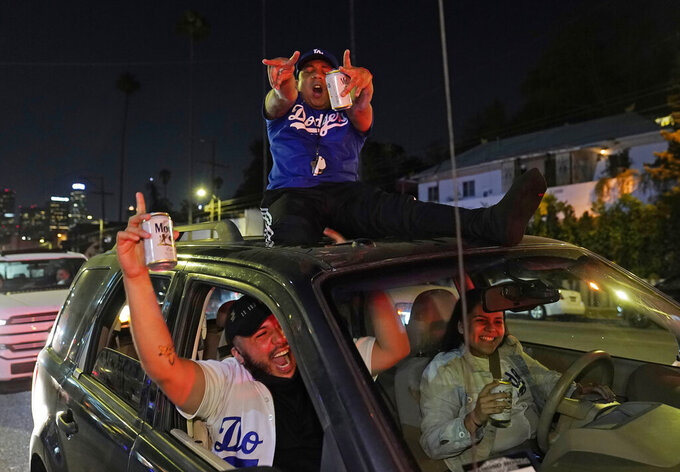 “Cody actually texted me back and said, ‘It’s your turn now,’” the Los Angeles Rams quarterback recalled Wednesday. “And I said, ‘Absolutely.’”

Los Angeles has become a city of champions again in an incredible October, and the Rams (5-2) want to extend this winning feeling into February. They’ve been discussing it on group chats and in the locker room ever since the Lakers raised their trophy two weeks ago, and the anticipation only increased when the Dodgers claimed their own championship.

“It’d be good to make that a little three-peat with us involved there,” Goff said. "It’s definitely something that we’re conscious of, absolutely.”

The Rams were watching and cheering from home while the Lakers won the NBA Finals in Florida just 16 days before the Dodgers raised the World Series trophy in Texas, capping an unprecedentedly quick back-to-back coronation for their metropolitan area’s two most beloved teams.

Although the Rams are the city's most popular franchise in the nation's most popular sport, they realize they aren't nestled in LA's heart as snugly as the Dodgers or the Lakers — particularly not after their former owners moved them to Anaheim and St. Louis for 36 years before Stan Kroenke brought them home in 2016.

But the Rams fully intend to be a cornerstone of the sports establishment in the nation's second-largest metro area for decades to come. Kroenke's sparkling new $5 billion SoFi Stadium in Inglewood is a major step toward that goal — and bringing a third championship in four months to Los Angeles just might cinch it.

Can the Rams do it? They've had three straight winning seasons, and they made it to the Super Bowl two years ago. Although they play in the NFL's toughest division, they're off to another strong start this fall as they hit the midway point of the regular season Sunday at Miami (3-3).

“We’ve got all the pieces,” Goff said. “We’re winning games. We are playing well on offense, defense, special teams. We always believe in ourselves, and we’ve been there once with a lot of the same people. We know how to get there. We’ve just got to finish it off, and hopefully this is the year.”

And now there's the City of Champions factor: If there is such a thing as civic momentum, the Rams are riding a big old wave of it alongside the Lakers and the Dodgers.

“You've got to be great to be relevant here in this city, and I think that's awesome," said coach Sean McVay, a boyhood Atlanta Braves fan who now roots for the Dodgers and manager Dave Roberts, whom he describes as a role model.

“Really amongst the team it’s, ‘Hey, let’s continue to produce and do our part to hold up our end of the bargain for the city,’” McVay added. “That pressure is a good thing. I think all 32 teams want to be able to do what the Dodgers just did, so we’re no different. But we’ve got to get to (win) No. 6 first.”

The Rams actually arrived in Los Angeles before either the Lakers or the Dodgers, becoming the West Coast’s first major pro sports franchise way back in 1946.

But their subsequent moves took them out of many LA sports fans’ hearts until they returned to a city that infamously hadn't had an NFL franchise since 1994, when Georgia Frontiere and Al Davis simultaneously left a wildly lucrative market and its millions of hungry sports fans.

Although rings are irreplaceable, the Rams are steadily building their case to deserve LA's love. They've been winners since McVay took over in 2017, and the league machinations that subsequently landed the Chargers in LA instead of the Raiders — the childhood favorite team of most Generation X and many millennial Angelenos, thanks to their thrilling 13-year run in the Coliseum from 1982-94 — undoubtedly benefited the Rams' quest.

The 33-year-old UCLA product is a Los Angeles native who lives in West Hollywood in the offseason. He grew up with season tickets at Dodger Stadium, and Kobe Bryant is his childhood hero.

“I don't think anyone really was" a Rams fan in Los Angeles during his childhood, Forbath said. “I didn't have a team.”

“Just being an LA native, it's crazy, because (the Rams) are the team here now,” added Forbath, who signed with the Rams last week. “All my friends and family here are Rams fans now, so it's very exciting to be a part of it.”

NOTES: TE Tyler Higbee was listed as being limited in Wednesday's practice, even though the Rams only did a walkthrough. Higbee missed the win over Chicago with a hand injury, but McVay is optimistic he will be able to play this weekend, although Higbee is still feeling pain in his hand. ... TE Gerald Everett and WR Trishton Jackson skipped the walkthrough with an illness. ... Defensive coordinator Brandon Staley is being cautious about DT A’Shawn Robinson, who could make his season debut this weekend in Miami. Staley won’t decide how much Robinson will play, if at all, until later in the week.