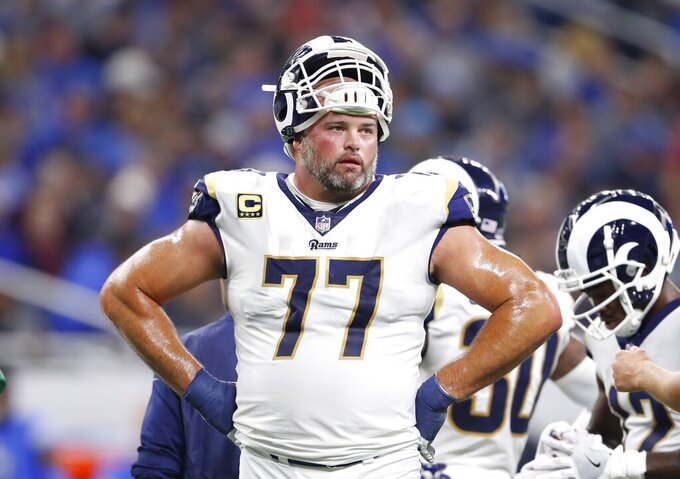 FILE - In this Sunday, Dec. 2, 2018 file photo, Los Angeles Rams offensive tackle Andrew Whitworth during the first half of an NFL football game against the Detroit Lions in Detroit. Rams offensive tackle Andrew Whitworth is in the playoffs for the seventh time in eight seasons but there is one thing he is still chasing, a postseason win. (AP Photo/Paul Sancya, File)

THOUSAND OAKS, Calif. (AP) — Seven trips to the postseason and no wins can wear on a person. Los Angeles Rams left tackle Andrew Whitworth has still managed to keep his sense of humor.

"This is the furthest I've been in the playoffs, even though we didn't play last week," Whitworth said.

Saturday's divisional-round game against Dallas at the LA Memorial Coliseum will be the 13-year veteran's eighth playoff appearance. The previous seven have been in the wild-card round and found his teams on the losing end. Whitworth injured his knee in the Dec. 30 regular-season finale against San Francisco, but says the week off allowed him to rest up and prepare for the Cowboys.

"It is good to have the extra week to study and focus on things where we needed to improve," Whitworth said.

Whitworth's first six playoff appearances were with Cincinnati, where he played for 11 seasons after being drafted in the second round in 2006. He signed a three-year contract with the Rams last March and has been a part of back-to-back NFC West titles.

This year's team, though, might be the best Whitworth has played for, which he readily admits. The 2015 Bengals got off to a 10-2 start before Andy Dalton broke his hand and missed the rest of the season. Cincinnati split its final four regular-season games and lost to Pittsburgh, in large part due a defensive meltdown and two defensive penalties on the final drive.

Whitworth also mentioned the 2013 Bengals, who won the AFC North with an 11-5 record but were eliminated by the Chargers.

"There were some years going in when you definitely didn't know if you had much of a shot, but those were good ones," he said. "What I like about this year's team is we have a good blend of youth and veterans. It seems like the veterans get energy from all the young players we have."

The move to the Rams also reinvigorated Whitworth because he wondered if he could start over in a new place and still play at an elite level. He was an All-Pro selection last year and has been an integral part of an offensive line that has allowed the sixth-least sacks in the league (61) over the past two seasons. And he's played a big role in Todd Gurley rushing for 1,000 yards both years.

Whitworth's best asset has been as a mentor and sounding board for quarterback Jared Goff, in much the same way he was when Dalton was drafted and became the Bengals' starter in 2011.

"It's not just to tell Jared what to do but if he just wants to talk and be there," Whitworth said. "I think it helped out a ton being around Carson (Palmer), who was a veteran, and then mentoring Dalton."

Rams coach Sean McVay agreed that the best things about Whitworth are his leadership and the way he interacts with teammates.

"The way that he leads is something like I really haven't seen before where he puts his arm around guys kind of individually," McVay said. "He's got a consistency with the way that he goes about his business. He's one of those guys that he just does right all the time. We say it all the time, 'We see better than we hear.' He doesn't really have to say anything, just the way that he goes about his business, whether it's from a production standpoint or just trying to help guys get better."

Even though the Rams are rested, they will be facing a Cowboys defense that was seventh in the league, allowing 329.3 yards per game, and yielded the seventh-fewest points in the league (20.3). While Los Angeles is the favorite, Whitworth has been on teams favored to advance before that have fallen short.

No matter the result, Whitworth figures to have the same outlook.