Ramsey embracing leadership role on and off field for Rams 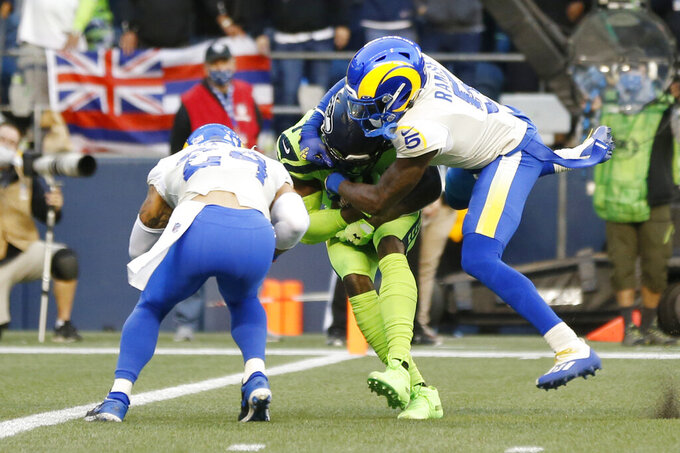 Ramsey is the ringleader of these outings, and the 2020 All-Pro says it's all part of being the team leader he strives to be.

“It’s something that honestly I’ve always wanted to do,” Ramsey said Thursday. “When I was in Jacksonville, we tried to find certain things to do. We were the only professional team there, so it was tough to find things to do. When I got traded out here in LA, I was just trying to get acclimated that first year, and then next year was COVID. So this year I’m like, ‘Let’s live a little bit. Be careful, mask up, but live a little bit, have a little fun and build a little team chemistry.’”

Ramsey's leadership skills are evolving along with his on-field talent during an outstanding start to the season in his do-everything role for the Rams (4-1), who visit the New York Giants (1-4) on Sunday.

Ramsey never stays in one position for long in most of Los Angeles' games. In his unique role defined as the “star” position, he lines up against wideouts, but he also guards tight ends or slot receivers, and he slips inside near the line of scrimmage regularly, playing a role similar to a linebacker.

And unlike some of the top cornerbacks of recent decades, Ramsey loves to play physical football: He is a heavy, eager hitter who delights in tackling and disrupting passes equally. He ranks fifth on the Rams with 29 tackles to go with five passes defensed and an interception despite every quarterback's wariness of throwing the ball in his direction.

“Jalen is so big, and he's so physical,” coach Sean McVay said. "He has taken on offensive linemen and snapped them back pretty good and blown plays up. ... When you have a guy that’s such a tone-setter on your back end like that, it just affects everybody else. I think he’s really raising the level of play and the expectations, that toughness to compete, that we’re looking for.”

Ramsey’s mind this week is on the difficulties raised by the absence of starting cornerback Darious Williams, his counterpart for most of his time in Los Angeles. Williams is out for at least the next three games with a sprained ankle, and Ramsey has been preparing inexperienced teammates Robert Rochell and David Long for increased responsibilities.

“This week is definitely a week that guys are going to be thrown in the fire and given those opportunities to show who they are and what they can do,” Ramsey said. “It’s an important week for a lot of guys, (but) for certain guys who are just getting rolled into the season, it’s even more important for them. D-Will is our brother, so we feel like we’ve got to go put on for him and make sure there’s no super-decline in our game out there. We’re going to take it personal.”

Ramsey essentially forced his way out of Jacksonville, but any concerns about his team commitment have been erased in LA. Whether connecting with young cancer patients, showing up to a game in a full mariachi suit to pay tribute to the team's in-house band, or signing fans’ jerseys at red lights, Ramsey is a positive public face of the franchise.

Ramsey has been a (masked) man about town lately: He caught both of the Dodgers' playoff games against the Giants earlier in the week, double-dating with a teammate for the second outing.

“It was packed,” Ramsey said of Dodger Stadium. “It was live in there. It was a cool little atmosphere, cool vibe.”

Ramsey is also friendly with Mookie Betts, the Dodgers' superstar outfielder and fellow Nashville native. Betts is two years older than Ramsey, but they played in many of the same youth programs in multiple sports.

“I always knew Mookie,” Ramsey said. “Mookie was always super-talented. Our families know each other. He's somebody that the city back home admires and feels like he's one of the greatest of all time to come out of Nashville, so there's a lot of respect for him.”

NOTES: DT Aaron Donald was limited in practice by a knee injury, but the 2020 All-Pro says he'll play at New York. ... K Matt Gay returned to full practice Thursday after being limited by an ankle injury. ... Donald indicated the Rams will promote veteran DB Donte Deayon from the practice squad to the active roster for Sunday with Williams out. Deayon appeared in seven games for LA from 2018-19 after starting his NFL career with the Giants.