Ramsey finally gets home debut after strong start for Rams 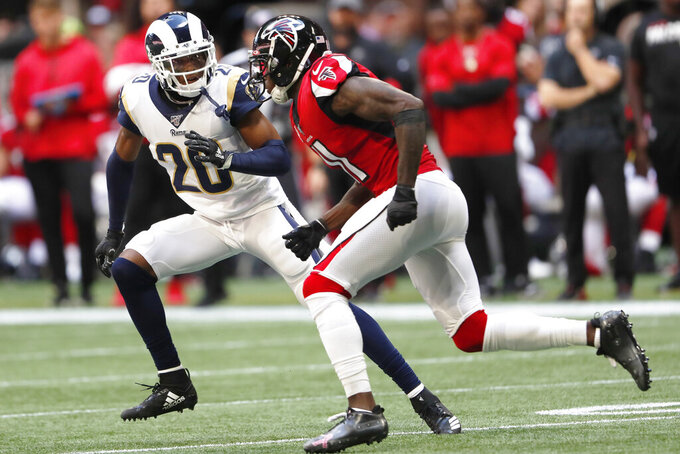 FILE - In this Oct. 20, 2019, file photo, Los Angeles Rams cornerback Jalen Ramsey (20) covers Atlanta Falcons wide receiver Julio Jones (11) during the first half of an NFL football game in Atlanta. Ramsey makes his home debut for the Rams this weekend, over a month after they acquired the star cornerback in a trade with Jacksonville. Ramsey’s arrival has been one of the smoothest aspects of the past few weeks for the Rams, who are in danger of falling out of the playoff race due to a sputtering offense. (AP Photo/John Bazemore, File)

THOUSAND OAKS, Calif. (AP) — After just three games with the Los Angeles Rams, Jalen Ramsey has impressed his new teammates with both his prodigious talent and his equally gargantuan trash-talking abilities.

Over a month after he switched coasts, the star cornerback’s new home fans finally get a chance to see what all the talk is about this weekend when Ramsey makes his Coliseum debut against the Chicago Bears.

Ramsey’s transition has been one of the smoothest aspects of the past four weeks for the Rams (5-4), who are in danger of falling out of the playoff race largely because of a sputtering offense. Ramsey’s arrival has coincided with a superb stretch of play by the Rams’ defense, which has built on Ramsey’s skill set to become even tougher.

Although he’s learning the defense on the fly, Ramsey is already fitting in smoothly with his new team after 3½ tumultuous years in Jacksonville.

“I play with a lot of passion and heart when I'm out there,” Ramsey said Wednesday. “I hope that's contagious, not only in the secondary, but with everybody.”

Ramsey spent much of last week’s game lined up against top Steelers receiver JuJu Smith-Schuster, who had only three catches. Ramsey caught Smith-Schuster’s attention with both his tight coverage and his profane, never-ending stream of talk.

Ramsey downplays that element of the game when he isn’t in uniform, but he has lofty goals for his performances with his new defense.

“I always want to be able to make a play somehow,” Ramsey said. “I want to be able to hold receivers catchless. That's impossible in today's game, but that's what I strive to do. I strive to have perfect technique, more than anything. I feel like when I focus on my game, focus on my technique, my eyes, my hands, my feet, just everything, I feel like I'm unstoppable.”

The Rams are no strangers to verbal cornerbacks after having Marcus Peters and Aqib Talib in their secondary until last month. But Ramsey takes every aspect of his game to a higher level than just about anybody else in the NFL.

“I'm not exactly sure what's going on, what's being said,” coach Sean McVay said with a grin. “I just know it looks like he's having fun out there competing.”

Rams defensive coordinator Wade Phillips has used Ramsey as a shutdown corner against the opponents’ top receivers whenever possible, although it can’t happen on every play. With Aaron Donald up front and Ramsey minding the secondary, Phillips has put together a scheme that has held Los Angeles’ last three opponents to 37 total points and just 299 yards per game.

“The good thing about Jalen is he is a very smart guy, so he’s been able to pick up the things that we’re doing, and then think ahead on some things,” Phillips said. “He’s asked us, ‘Hey, what if this happens? Do I do this?’ And we say, ‘Yes, you do.’”

Indeed, Ramsey is still learning. He leans on the knowledge of veteran safety Eric Weddle, who only joined the Rams this season, to nail down the intricacies of Phillips’ scheme.

But Ramsey knows how to be on an island alone with a receiver, and the Rams are already counting on that skill.

“Regardless of what stats may say, whatever production has been, I know when you turn on the film and actually watch the film, people who know about football and actually watch the film can see that I only get like two targets a game, if that,” Ramsey said. “So basically what that tells you is usually I'm taking the quarterback off his first read. The quarterback has to hold the ball a little bit longer. That can help the guys up front, and it can help the other guys in the secondary as well when the quarterback is checking to his second or third read.”

Opponents have rarely even thrown Ramsey’s way so far, but that allows Ramsey to have an impact without getting an interception yet. His ability to harass the likes of Julio Jones and Smith-Schuster sets off that chain reaction of good things for Los Angeles — and it will ripple beyond this season into next, when Ramsey will be in his fifth pro season and the Rams will get a fresh start after this up-and-down year.

Ramsey has made plenty of good noises about being committed to the Rams for the long term, too: During a recent tour of the Rams’ under-construction stadium in Inglewood, Ramsey picked out his locker and mused about getting a statue of himself in his Rams uniform outside the $5 billion complex when his playing career ends.

“I'm striving to get into that groove and help this team win as many games as I can,” Ramsey said.