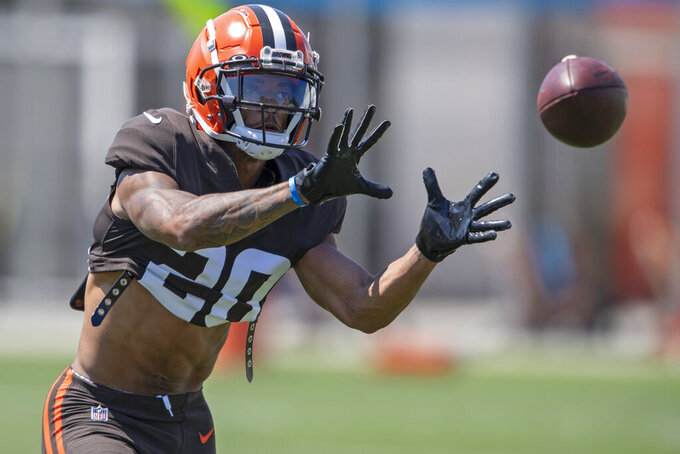 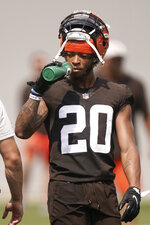 He has been no different after practice.

Asked to sing by the team's veterans as part of the time-honored summer hazing tradition for first-year players, Newsome stood before his teammates and performed a soft, rhythm and blues love song: “Charlene” by Anthony Williams.

Newsome has been all the Browns had hoped after they drafted him with the No. 26 overall pick in this year's draft. The former Northwestern star has shown quickness, coverage ability, ball-hawking skills and toughness in daily battles against Cleveland's talented group of wide receivers.

That's not to say he's been perfect. Newsome has been burned for his share of big plays — that's just life as a pro cornerback.

“Every single day I’m having a humbling moment,” he said with a smile before Tuesday's practice. “We’re going against some of the best guys in the world, so every single day I get beat sometimes, so definitely every moment is humbling.”

Newsome is competing with Greedy Williams for a starting job opposite Denzel Ward, who has been slowed the past few days by “soreness.”

The Browns released their first unofficial depth chart in advance of Saturday's exhibition opener at Jacksonville, and Williams who missed all of 2020 with a nerve injury in his shoulder, is listed on the first-team ahead of Newsome.

Williams is the more experienced player, so it's not a surprise he's No. 1 — for now. Newsome seemed to expect to be slotted in a backup role, and insists he just wants to contribute.

“Whether it’s starting or whatever, I really don’t care,” he said, parroting his comments from minicamp. “I’m just trying to get as best as I can and help the team in any way I can. So I‘ll let coach come out with the depth chart, whatever he needs me to be.”

Newsome said getting to match up with Jarvis Landry, Donovan Peoples-Jones, Rashard Higgins and others can only help him improve and get ready for the season.

He hopes they feel the same.

"We’re all making each other better — like they say, iron sharpens iron, so going against these guys every single day is not only going to make me a better player but make them better as well,” he said.

Newsome hasn't gone against Odell Beckham Jr. yet as the speedy star wide receiver is still easing back after a season-ending knee injury and not taking part in team drills.

That day is coming, and Newsome is looking forward to seeing how he stacks up against one of the game's elite players.

“I can’t wait to go against him,” he said. “He’s arguably, obviously, one of the best receivers in the league. So when he’s getting out there full go, I can’t wait for that too.”

“He is so diligent about his work, understanding his job, understanding his techniques and constantly working on them to fine tune them,” he said. “That is part of being a rookie, and particularly at that position where you are going up against some really good players.”

While Newsome radiates confidence, there's also a refreshing humility about the 21-year-old that isn't always evident in young players.

He knows he's good, but Newsome also knows he has a lot to learn.

Last week, cornerback Troy Hill, who spent five seasons with the Rams before signing as a free agent in Cleveland, pointed out Newsome's work ethic and called him “a star in the making.”

“To get some of that praise from one of the best nickel cornerbacks in the league is just amazing,” Newsome said. “I’ve still got a long way to go to get to that position, but that just shows that I came in and I was ready to work. I’m just trying to develop each and every day.”

NOTES: Star DE Myles Garrett has a hamstring injury and it's not known when he'll be back. Stefanski gave no specifics on Garrett's issue. ... Ward, safeties Ronnie Harrison (hamstring) and Grant Delpit (Achilles, hamstring), DT Malik McDowell (oblique) and WR Anthony Schwartz (hamstring) were among other notables held out of practice. ... Beckham ran sprints in the end zone during team drills. It's not known when he'll be doing more.