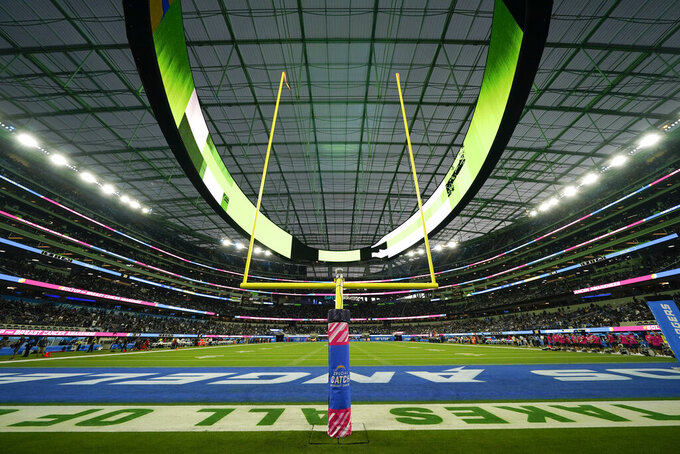 The field at SoFi Stadium sits empty during a weather delay shortly before the scheduled start of an NFL football game between the Los Angeles Chargers and the Las Vegas Raiders, Monday, Oct. 4, 2021, in Inglewood, Calif. (AP Photo/Ashley Landis)

NFL and network executives expected ratings to increase this season. But the rate through the first four weeks has still taken many by surprise.

Games are averaging 17.3 million viewers on television and digital, a whopping 17% increase over last season and 3% compared to two years ago.

Whether the league can maintain that level of growth remains to be seen. Last season was played during the pandemic, mostly in empty stadiums. Also, many people’s viewing habits changed in a presidential election year.

The league has had the top 21 rated shows since the start of the season. The top two games have featured Tom Brady and the Super Bowl champion Tampa Bay Buccaneers. Brady’s return to New England last Sunday was the biggest draw, averaging 26.7 million viewers, with the season opener against Dallas second at 24.8 million.

The Bucs-Patriots game was NBC’s second-most watched match since it started airing the “Sunday Night Football” package in 2006.

“I think the league right now is firing on all cylinders,” NBC Sports Group chairman Pete Bevacqua said. “As much as last year was a wonderful achievement getting the season in with no delays, you see what the full stadiums have added, along with the power and passion that fans bring.

“Not only have we had great matchups on paper, but they have been unbelievable on the field.”

Four of the five league broadcasters have growth above 20%. The three NFL Network Thursday night games averaged 8.1 million, which is up 29% from last season and the highest average since 2018. Last Thursday’s Jacksonville-Cincinnati game averaged 8.5 million, the best showing for a non-Fox or CBS-shared game since the Cleveland Browns-New York Jets contest in 2018.

Fox has the highest Sunday afternoon average at 18 million, but that is an increase of 2% from last season. Fox did not have an exclusive doubleheader in Week 1, which could be one reason for not as big a ratings bump.