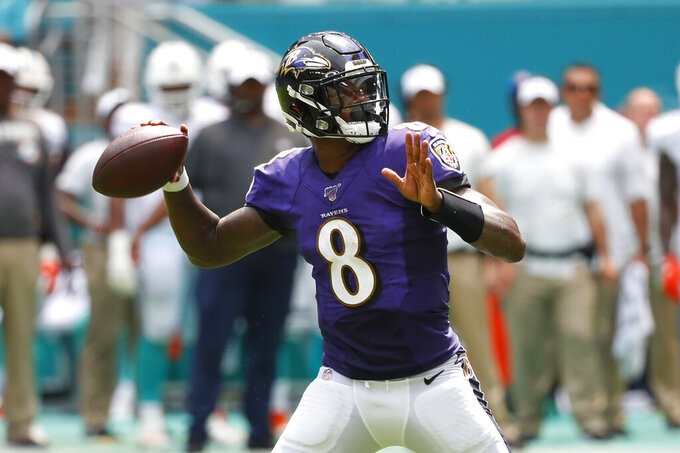 FILE - In this Sept. 8, 2019, file photo, Baltimore Ravens quarterback Lamar Jackson (8) looks to pass the ball during the first half at an NFL football game against the Miami Dolphins, in Miami Gardens, Fla. The Baltimore Ravens are really looking forward to seeing Terrell Suggs this Sunday _ right up until the opening kickoff of their game against the Arizona Cardinals. At the point, the Ravens will turn their attention toward keeping their former teammate clear of quarterback Lamar Jackson.(AP Photo/Wilfredo Lee, File)

BALTIMORE (AP) — The Baltimore Ravens are really looking forward to seeing Terrell Suggs this Sunday — right up until the opening kickoff of their game against the Arizona Cardinals.

At the point, the Ravens will turn their attention toward keeping their former teammate clear of quarterback Lamar Jackson.

"To see his face on the scouting report is pretty funny. It's crazy," Baltimore guard Marshal Yanda said. "We can talk before the game and we can talk after the game, but during the game it's business."

For 16 years, Suggs was Baltimore's premier pass rusher. In addition to establishing the franchise record for sacks, Suggs provided leadership and comic relief on the field and in the locker room.

During this past offseason, however, the 36-year-old opted to return to his roots and signed a one-year, $7 million contract with Arizona.

When Suggs saw the Cardinals were playing the second game of the season in Baltimore, he began preparing for a strange, nostalgic journey.

"It's kind of a unique situation, isn't it? It's kind of weird," he said. "Once it hit me that it was actually (Baltimore's) home opener, that's when I was kind of like, 'Wow.' That's when the craziness of it kind of set in."

Suggs launched the second stanza of his career with four tackles and two sacks in Arizona's season-opening tie with Detroit. If the Ravens (1-0) are to build on their 59-10 rout of Miami, they're going to have to stop their old friend from creating havoc in the backfield.

After Ray Lewis retired, Suggs was always the last defensive player introduced to the crowd. On Sunday, he'll come out with the Cardinals, but surely will be recognized for his past accomplishments in Baltimore.

"I don't know how I'm going to feel," he said. "This is something that in 17 years I've never experienced, so this is going to be a first."

Some things to know about the first meeting between Arizona and Baltimore since 2015:

After throwing for 324 yards and five touchdowns against the Dolphins, Jackson will be looking to keep the offense rolling in Game 2 of his second NFL season.

He said his objective is to "try to put on a show."

Jackson proved last week that he can pass the ball as well as run with it.

"I had a whole year to get chemistry down pat, study a lot, work hard on throwing the ball," he said.

Cardinals quarterback Kyler Murray brought his team back from an 18-point, fourth-quarter deficit and finished 29 of 54 for 308 yards and two touchdowns.

The 2018 Heisman Trophy winner and No. 1 overall selection in the draft is the first player in franchise history to throw for 300 yards in his debut.

Jackson and Murray both have a Heisman in their trophy case and have the potential to shine as pros for years to come.

"In my opinion, they're two guys that can be the future of the sport if they continue to progress and put in the work and the time," Arizona coach Kliff Kingsbury said.

The Cardinals are relying on more than one Murray on offense.

Justin Murray started at right tackle in Week 1, just a few days after Marcus Gilbert injured his right knee in practice during a non-contact drill. The team put Gilbert on injured reserve on Tuesday.

Murray wasn't perfect against the Lions, but he more than held his own, especially considering it was the second-year player's third career NFL game. The 6-foot-5, 315-pounder did enough that Kingsbury expects him to start against the Ravens.

The veteran receiver signed with the Cardinals a few weeks ago, but didn't play in Week 1. Kingsbury said he expects Crabtree will be in the rotation this weekend.

"He brings a lot of experience, a lot of savvy, a lot of catches and a lot of physicality," Kingsbury said. "I know he'll be excited for this one."

Crabtree played for the Ravens last season, starting all 16 games and catching 54 passes for 607 yards and three touchdowns.

The speedster was a teammate of Kyler Murray's at Oklahoma. Andrews also played for the Sooners, but those ties will be put on hold at game time.

Andrews said of Murray: "He's an Oklahoma guy, but he's a rival this week."