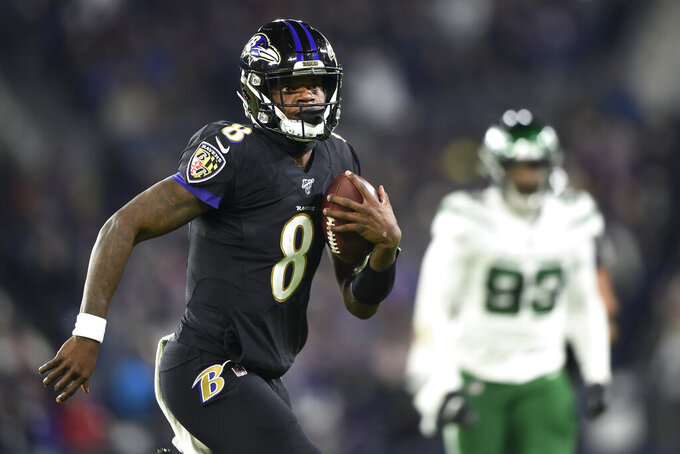 CLEVELAND (AP) — When the Ravens and Browns played 12 weeks ago, Lamar Jackson was showing only hints of superstardom and the Browns looked like a legitimate team.

Things have changed dramatically since then for Baltimore and Cleveland.

After losing 40-25 loss to the Browns on Sept. 29, the Ravens (12-2) have ripped off 10 consecutive wins, Jackson has emerged as one of this season's top MVP contenders, Baltimore has clinched a division title and can wrap up the No. 1 spot in the AFC playoffs with a win on Sunday over the Browns (6-8).

The Browns are clinging to infinitesimal odds of ending their postseason drought dating to 2002, the fan base is in its annual winter uproar, and first-year coach Freddie Kitchens is fighting for survival.

It all looked so different back in the fall when the Browns scored 30 points in the second half and rocked the Ravens, who seem to have supplanted New England as the league's best team.

“That was our last loss and it wasn’t good," said Ravens running back Mark Ingram, who needs 37 yards to reach 1,000. "We’re not that team anymore. We’re a better team. We kind of grew a lot from that moment. We were 2-2 and pretty much said our season could go one of two ways. We can change it and have success, or we can fold and fail.

"We came together, went back to the drawing board and we kept grinding one day at a time and here we are, 10 wins later. We feel like we’re a different team. We know they have a lot of talent on their side. .... We’re just trying to keep it going.”

For the Browns, Sunday's matchup could either save Kitchens or send him packing.

Cleveland's playoff hopes were all but erased last week with a loss at Arizona; the Browns need to win their last two and need a ton of outside help to make it. Kitchens' shaky future took a major blow when it appeared some of his players weren't giving it their all against the Cardinals.

Kitchens didn't question his players' effort, but running back Kareem Hunt inferred this week that some of his teammates quit.

Browns quarterback Baker Mayfield didn't double down on Hunt's strong words, but he felt they were warranted.

“Kareem has been in a place in Kansas City that knows how to win so his level and his standard of accountability for everybody to do their job is very high,” said Mayfield, whose play has been sporadic. “That is the type of guy you want to bring in here. I do not think it was anything personal to anybody, but Kareem, bringing him in was huge part for us raising the standards. We want that. We want guys to be able to have accountability.”

Jackson was the fifth quarterback drafted in 2018. He's now the prize pick in a group that included Mayfield, Sam Darnold, Josh Rosen and Josh Allen, all of who were considered better prospects.

“People pinned him as a non-throwing QB so it was more of ‘does he fit in our system?’ type of ideas,” Mayfield said when asked why Jackson wasn't considered elite. "That is why they are having success is they are building around him and calling plays for him. They are doing a really good job of that.”

The drama surrounding the Browns all season eased a little this week when star wide receiver Odell Beckham Jr. said he wants to stay.

There had been rampant speculation Beckham wanted out of Cleveland, and the three-time Pro Bowler had done little to quiet the constant noise before saying he's not looking to bolt after a disappointing season.

“I’ll be here,” he said. “We’ll figure this thing out. It’s just too special to leave.”

Ravens tight end Mark Andrews is having a record-breaking season.

He's already set a single-season mark for touchdown catches by a tight end (8) and needs only 97 yards to pass Todd Heap's record for yards receiving in a season.

"He finds a way to get open," Jackson said.

Andrews has Cleveland connections. He was drafted in the third round last season out of Oklahoma, where he played with Mayfield and was in the quarterback's wedding party.

Despite missing most of the Buffalo game two weeks ago with a knee injury, Andrews leads the Ravens in catches (58), yards receiving (759) and touchdown receptions.

Tempers flared the last time the teams played as Beckham fought Ravens cornerback Marlon Humphrey, who took a punch from the receiver before flinging him to the ground and jamming his fists into Beckham's throat. Each was fined $14,037 by the league.

Beckham said he's moved past the incident and that it won't be difficult to control his emotions.

“I'm over it,” he said. "I've had the candy dangled in front of me before. It's just football."

After losing sack specialists Terrell Suggs and Za'Darius Smith to free agency, the Ravens were expected to struggle getting to the quarterback.

Matthew Judon has picked up the slack.

Judon has a team-leading 8 1/2 sacks and he earned his first Pro Bowl bid. Most of all, though, he's delighted to prove the doubters wrong.

"You play this game to be recognized. The individual goals mean something," Judon said. "But the lack of pass rush you all were talking about, you all are not talking about it anymore. Now you're talking about how fun it is to watch this defense."

Baltimore has 34 sacks despite losing Suggs, who signed as a free agent with Arizona after setting a Ravens franchise record for career sacks.

"We love Suggs and everything he did for us, but we had to press forward and that's what we did," Judon said.