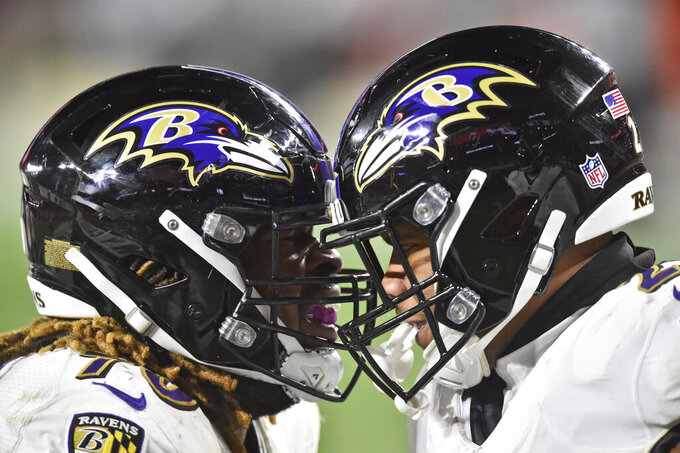 Baltimore Ravens running back J.K. Dobbins, right, celebrates his two-point conversion with an unidentified teammate during the second half of an NFL football game against the Cleveland Browns, Monday, Dec. 14, 2020, in Cleveland. Cleveland safety Andrew Sendejo sustained a concussion from a collision with Dobbins on the play. (AP Photo/David Richard)

CLEVELAND (AP) — The hard hitting between the Ravens and Browns in Monday night's thrilling game carried into Tuesday.

Cleveland safety Andrew Sendejo sustained a concussion late in the fourth quarter after a collision at the goal line with Ravens rookie running back J.K. Dobbins, who gloated about the violent play on social media.

Sendejo got hurt when he couldn't stop Dobbins on a 2-point conversion in Baltimore's 47-42 win over the Browns — one of 2020's best games so far.

After seeing fans respond to his tweet about Sendejo, Dobbins, who played at Ohio State and has numerous fans in the Cleveland area, walked back his message.

“It’s a competitive game,” Dobbins said. "People talk trash on the field all the time I respect bro like chill haha I hope hes okay.”

Sendejo has taken some criticism from Cleveland fans for his play this season. But the 11-year veteran has also come through in some big moments for a Browns secondary that has had numerous injuries.

Sendejo's injury was the most significant for the Browns (9-4), who will visit the New York Giants on Sunday night.

The Browns are thin at safety with starter Ronnie Harrison on injured reserve with a shoulder injury. Coach Kevin Stefanski indicated that Tedric Thompson, claimed off waivers last month from Kansas City, could be an option going forward.

Stefanski also said he’s hopeful tight end Austin Hooper will be back this week after missing Monday's game with a neck injury. Hooper, who has 30 catches, missed two games earlier this season after an emergency appendectomy.

Cornerback Denzel Ward (calf) and wide receiver KhaDarel Hodge (hamstring) are expected to practice this week as the Browns try to close in on a playoff spot. Ward has missed the past three games, and Hodge the past two.