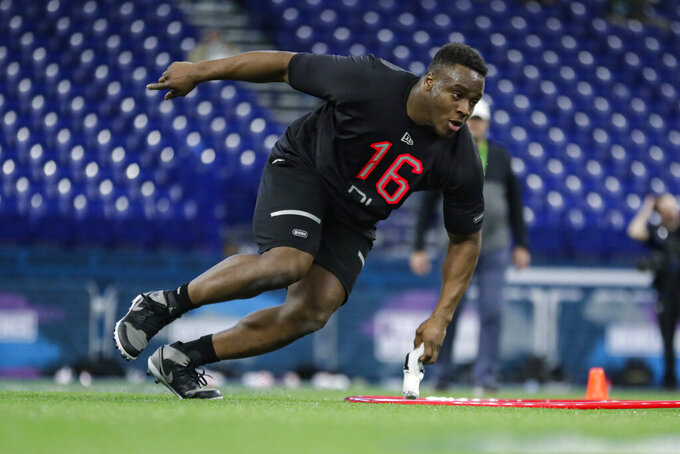 Dobbins ran for a school-record 2,003 yards and 21 touchdowns with the Buckeyes last season. He left after his junior season following a career in which he amassed 4,459 yards rushing with 38 TDs.

Dobbins averaged 6.2 yards per carry over three seasons, including 7.2 yards as a freshman and 6.7 last year for the Big Ten champions. He ran for 172 yards against Wisconsin in the conference title game.

The Ravens hope the 5-foot-10, 217-pound Dobbins will enhance a running game that compiled a record-breaking 3,296 yards in 2019. With fleet-footed quarterback Lamar Jackson leading the way, Baltimore averaged 206 yards rushing while rolling through the regular season with an NFL-best 14-2 record.

The idea of throwing Dobbins into the mix was too good to pass up.

“With our offense, we want to add as talented guys as we can at skill positions," general manager Eric DeCosta said. “This was a guy who was, in my opinion, one of the very best in college football (last) year. He fits us. I think he's going to be a dangerous player and give us the depth to do what we like to do."

Dobbins will likely begin his pro career as a backup to nine-year veteran Mark Ingram, a physical back who rushed for 1,019 yards and 10 scores in 2019. But Ingram turned 30 in December, and Dobbins provides Baltimore with a young, speedy option.

A starter since his freshman season at Ohio State, Dobbins seems OK with the proposition of launching his NFL career behind Ingram on the depth chart.

Still, Dobbins feels he's got enough talent to be able to contribute immediately.

“I am an offensive weapon. I can do anything they want me to do," he said. “I can catch the ball, I can run it, and I can block. So, I feel like I’ll help Lamar Jackson and this offense thrive.”

DeCosta used his initial third-round pick to take Texas A&M defensive tackle Justin Madubuike, a 6-3, 304-pounder who is considered quick for his size.

Madubuike started 12 games as a sophomore and had 5 1/2 sacks in 12 games as a junior. He joins a retooled defensive line that includes Calais Campbell and Derek Wolfe, both obtained during the free agency period before the draft.

The Ravens’ defense long ago earned the reputation of being tenacious and ornery, and Madubuike was honored to be chosen to help carry on the tradition.

“It's crazy man. Guys like Ray Lewis, Ed Reed, guys who came before me, that's the standard of defense," Madubuike said while wiping away tears of happiness. “I'm ready to be part of it."

With the 92nd overall pick, the Ravens selected wide receiver Devin Duvernay of Texas. Baltimore entered the draft looking for a deep threat to go with Marquise Brown, and Duvernay appears to be the right fit. He had 106 catches for 1,386 yards and nine touchdowns for the Longhorns last season.

“The No. 1 priority was to get another fast guy in the offense, a speed guy," coach John Harbaugh said. “This was a guy we were looking to get, and I'm glad it worked out."

DeCosta took another Ohio State player at No. 98 overall, linebacker Malik Harrison. He led the Buckeyes with 75 tackles as a senior, including 16 1/2 for a loss and 4 1/2 sacks.

“We got some good work done today," DeCosta said.

The Ravens are slated to have three picks on Saturday, one apiece in the fourth, fifth and seventh rounds.

DeCosta focused on defense during the first night of the draft, selecting LSU linebacker Patrick Queen with the 28th overall pick.

Queen was the first LSU player ever drafted by the Ravens. After playing in only three games as a freshman, Queen developed into a star with the Tigers and hopes to continue to progress as Baltimore's middle linebacker.

“I feel like I haven’t even reached my full potential yet, so the sky is the limit," he said.