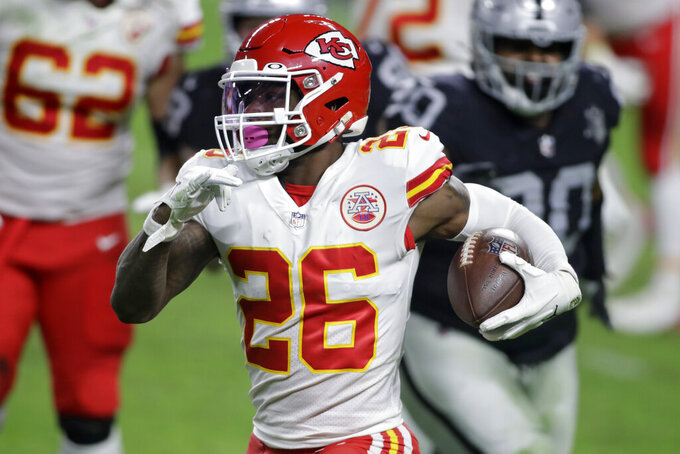 FILE - In this Nov. 22, 2020, file photo, Kansas City Chiefs running back Le'Veon Bell (26) carries the ball against the Las Vegas Raiders during the first half of an NFL football game in Las Vegas. The Baltimore Ravens signed Bell to their practice squad, adding another backfield option in the aftermath of J.K. Dobbins’ season-ending injury. Bell was cut early last season by the New York Jets, then rushed for 328 yards in 11 games with Kansas City. He did not play in the Super Bowl for the Chiefs. (AP Photo/Isaac Brekken, File)

“Gus made a cut — left-to-right cut — and landed wrong on his ankle, and the weight ended up going on his knee. Kind of a fluke deal," Harbaugh said. "Marcus was just kind of turning, pivoting on a turn — a basic turn that he makes dozens of times every single practice.”

Baltimore’s backfield has been hit hard by injuries during the preseason. Running back J.K. Dobbins is out for the season with a knee injury, and Justice Hill is on IR as well.

Harbaugh said the team is disappointed for the injured players, but he also struck a defiant tone entering the season opener at Las Vegas on Monday night.

“The train’s moving fast, and we’re excited to go play Monday night," he said. "The game’s going to go off at 5 o’clock Pacific time, and we’re going to be there right on time. We won’t be late.”

The Ravens have signed several veteran running backs this week in an effort to plug the holes in their backfield. Baltimore signed Latavius Murray to the roster and signed Devonta Freeman to the practice squad. The Ravens also added Le'Veon Bell to their practice squad.

Harbaugh said those players need to get up to speed on the playbook, and the team will need to determine what they can handle in a game.

Murray, who rushed for a career-high 1,066 yards in 2015 with the Raiders, spent the past two seasons with the Saints. New Orleans released him this week.

“Murray came in. He’s been in training camp. He’s in shape," Harbaugh said. "Le’Veon, he’s been in great shape, but he’s got to get in football shape a little bit. ... Freeman was in camp, so he’s in shape.”

The Ravens led the NFL in rushing last season, when Dobbins and Edwards combined for 1,528 yards on the ground. Quarterback Lamar Jackson is also a big running threat, and these injuries obviously put more pressure on him to have a big season.

“We've got us," Harbaugh said. "I like us. I like everything about us, and I'm excited about us going forward into this season.”