Ravens find workout to be welcome escape from virus concerns 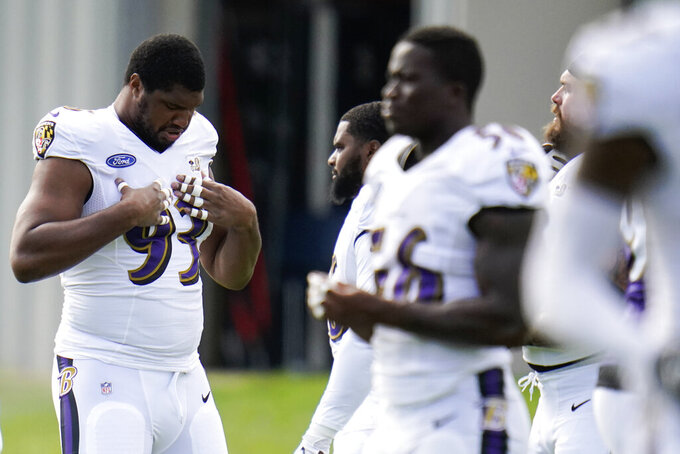 OWINGS MILLS, Md. (AP) — After being tested for coronavirus outside the building, donning masks and carefully practicing social distancing in the locker room, the Baltimore Ravens enjoyed a bit of normalcy Monday with their first full-team workout in pads.

With the exception of the masks on members of the coaching staff and the absence of fans in the stands, the 90-minute session had the look of a routine training camp practice.

“Being back out there with the guys, getting a sweat going, stopping the plays and having contact, for just a brief moment it felt like we didn’t have to worry about the virus," Pro Bowl linebacker Matthew Judon said. “It felt good to be back in the pads."

Judon, who accepted the franchise tag during the offseason, acknowledged that “football is different" during this pandemic. But the Ravens are safely and carefully moving forward, along with the 31 other teams, hoping to play a season that will surely be unlike any other.

There probably won't be fans in the stands at most stadiums. Yet coach John Harbaugh still had loud music blaring from speakers in the end zone while the offense ran plays in an effort to simulate the noise of a crowd.

“It’s what we do. It’s fun. I think it’s good for the guys," Harbaugh said. “It’s a valuable tool and I think we all enjoy it."

The Ravens' 14-2 record during the regular season was the best in the NFL last year, but a loss to Tennessee in their playoff opener left them with a bitter feeling and provided incentive to end this season on a far happier note.

The process began two weeks ago when the team reported to camp, and being on the field in pads was the next step toward reaching the Super Bowl.

“We’ve got a great team. We’ve got a lot of confident players, a lot of confident coaches that trust in us," right offensive tackle Orlando Brown Jr. said. “It was just exciting to get out there and play some real ball with the pads on, being able to physically grab and move guys. There was a whole other level of energy today."

After the final horn sounded, the players walked back into the training facility, where they donned their masks and kept their distance from each other, a task made easier by tracking monitors on their wrists that flash when a person lingers fewer than six feet away.

“It ends up being like a dog trainer collar,” defensive coordinator Don Martindale said. “You just know what six feet is now.”

On the field, though, the Ravens huddled up, banged helmets on the line and slapped high fives after a standout play, such Lamar Jackson's long pass that ended with Willie Snead's leaping catch in the end zone between two defenders.

“It’s football," Harbaugh said. “It’s August 17, we’re 26 days from our first game against the Browns and we’re just getting into pads. We understand the urgency of it."

Although there won't be any preseason games, there's no avoiding injuries. Harbaugh disclosed that wide receiver Chris Moore will miss several weeks after breaking a finger and second-year cornerback Iman Marshall sustained a major knee injury that will require surgery and almost certainly keep him sidelined for the season.

“He had been working hard and was practicing well and just came down on his right leg really awkwardly,” Harbaugh said.

Marshall on Monday said on Twitter: “Can’t dwell on what already happened just have to keep pushing with God and faith by my side.”