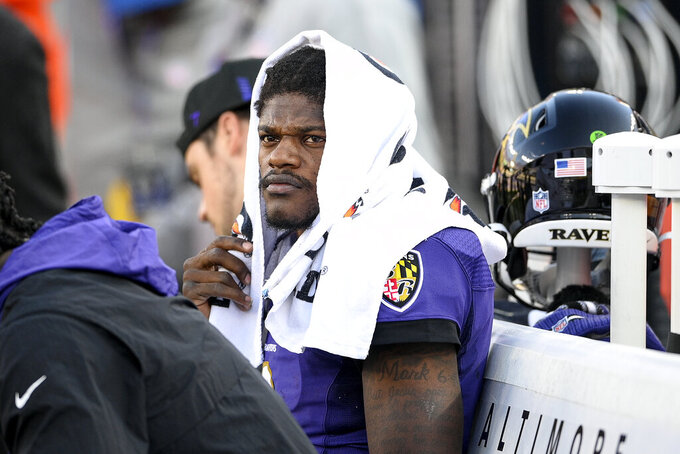 Baltimore Ravens quarterback Lamar Jackson sits on the bench during the second half of an NFL football game against the Cincinnati Bengals, Sunday, Oct. 24, 2021, in Baltimore. The Bengals won 41-17. (AP Photo/Nick Wass)

OWINGS MILLS, Md. (AP) — After the past two weeks, John Harbaugh’s point about the nature of the NFL is well taken.

After playing perhaps their most complete game of the season in a 28-point win over the Chargers a week earlier, the Ravens were beaten by almost the same margin by Cincinnati on Sunday. The 41-17 loss dropped Baltimore into a first-place tie with the Bengals in the AFC North.

As much as they deserve credit for winning five games in a row despite constant injury problems, the Ravens have shown their share of flaws. It was probably unrealistic to expect them to pull away in the division without rectifying some of those deficiencies.

“We played our worst game of the season, worst game in a long time,” Harbaugh said. “Bengals played very well. They were very prepared, played a great game.”

Joe Burrow threw for 416 yards and three touchdowns, and Ja’Marr Chase had eight catches for 201 yards and a TD for Cincinnati. The rout was led by those two, but the Cincinnati defense was impressive as well.

The Ravens lost running backs J.K. Dobbins and Gus Edwards before the season, and there have been other significant injuries as well. If you’d said they’d be 5-2 heading into their open date, that would have probably seemed optimistic — especially after they lost their opener at Las Vegas and had a home game against Kansas City up next.

Baltimore responded with those five straight wins, but the streak ended when Cincinnati — a divisional opponent — handled the Ravens with ease. That’s always cause for concern.

For most of the game, the Ravens were able to stop the run. They allowed a couple big gains on the ground toward the end, but that wasn’t the main reason they were so far behind.

“We’re capable of being a dominant run defense, and we are on very many plays. On very many plays, there’s nowhere to run,” Harbaugh said. “But we’ve given up too many big runs.”

Pass defense has been an off and on issue all season. There have been times Baltimore has looked OK in the secondary, but the Ravens have now allowed three 400-yard passing games by opposing quarterbacks: Derek Carr, Carson Wentz and Burrow.

There aren’t many Ravens who played well Sunday, but rookie Rashod Bateman had 80 yards on three catches in his second career game. It looks like he’ll be a contributor this year if he stays healthy.

“Definitely feels good to be back on the field. Back healthy, being able to play comfortable,” said Bateman, who missed the first five games of the season with groin problems.

In addition to their problems containing Chase and the Cincinnati offense, the Ravens just looked unusually disorganized at times. For example, in the second half, Lamar Jackson took a sack on third down that pushed Baltimore back out of comfortable field goal range. The Ravens lined up as if to go for it on fourth-and-15, then called a timeout instead of letting the play clock run out.

Then Baltimore punted, meaning the timeout wasn’t worth much.

This was a game the Ravens and their coaching staff will want to put behind them.

T Patrick Mekari left with an ankle injury, and that could be significant if he misses any future games. Mekari had Baltimore’s top offensive grade of the game Sunday according to Pro Football Focus.

115 -- number of yards after the catch for Chase last weekend. The Ravens have had tackling issues this season, and Chase was someone who could definitely exploit it.

The Ravens are off this coming weekend, then resume Nov. 7 against Minnesota — their fourth home game in a row. After that, the schedule doesn’t look too imposing with trips to Miami and Chicago.