Ravens get back Andrews; Hooper out for Browns 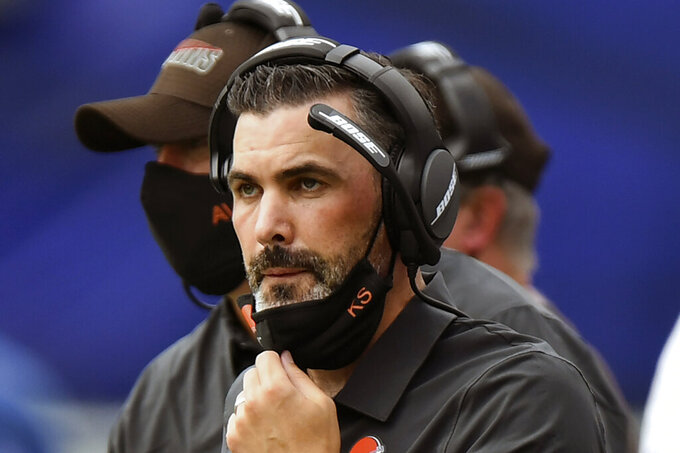 FILE - Cleveland Browns head coach Kevin Stefanski looks on in the first half during an NFL football game against the Baltimore Ravens, Sunday, Sept. 13, 2020, in Baltimore. Other than it being his coaching debut with the Browns, Kevin Stefanski has no fond memories of Cleveland's opener at Baltimore. (AP Photo/Terrance Williams, File)

CLEVELAND (AP) — Lamar Jackson has one of his favorite playmakers back to face the Browns. Baker Mayfield will be missing his top tight end.

Andrews, who has 60 catches and six touchdown receptions this season, had been on the reserve/COVID-19 list before he was recently activated. He was one of 23 Baltimore players placed on the list following an outbreak of the virus.

Jackson and Andrews, a Pro Bowler last year, have combined for 16 TDs over the past two seasons.

Cleveland's offense will be without starting tight end Austin Hooper because of a neck injury.

Hooper, who signed with the Browns as a free agent in March, had been questionable coming in after his neck flared up last week. He's been solid as a blocker and pass-catcher for Mayfield and Cleveland coach Kevin Stefanski, who likes to use multiple-tight end formations.

Hooper has 30 receptions for 286 yards and two TDs.

Rookie Harrison Bryant will start for Hooper and David Njoku and Stephen Carlson will get more snaps.

Baltimore defensive end Calais Campbell is active after being listed as questionable with a nagging calf injury.

The 6-foot-8, 300-pound Campbell, who has four sacks and knocked down six passes, did not practice this week after playing just 23 snaps in Tuesday’s win over Dallas.

The Browns are also missing Denzel Ward, their top cornerback, who is sidelined for his third straight game with a calf injury sustained against Philadelphia on Nov. 22.

Cleveland's offensive line is intact. Right guard Wyatt Teller was activated form the COVID list on Sunday. He didn't practice at all last week as he was isolated following a close contact.