Ravens guard Yanda retires after 13 years on his own terms 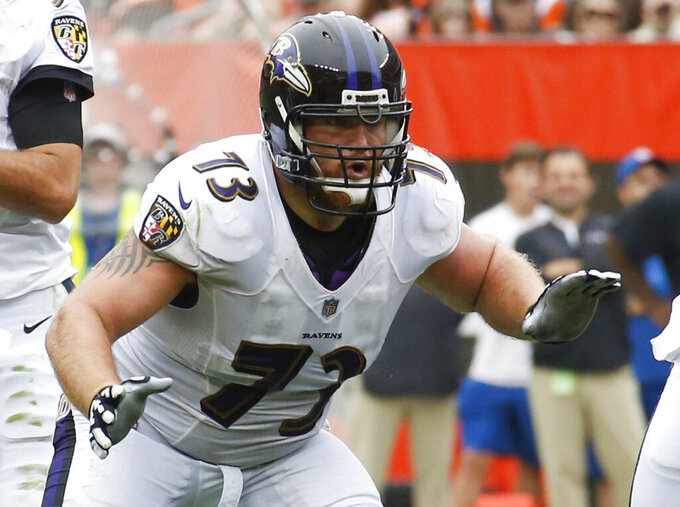 FILE - In this Oct. 7, 2018, file photo, Baltimore Ravens offensive guard Marshal Yanda (73) plays against the Cleveland Browns during the first half of an NFL football game in Cleveland. Yanda retired from the NFL on Wednesday, March 11, 2020, with the satisfaction of knowing that he walked away before being kicked out the door. (AP Photo/Ron Schwane, File)

OWINGS MILLS, Md. (AP) — Much thinner and chattier than during his playing days, Marshal Yanda retired from the NFL on Wednesday with the satisfaction of knowing he walked away before being kicked out the door.

Yanda played his entire 13-year career with the Baltimore Ravens, who showed their appreciation for the eight-time Pro Bowl guard by sending him off with a framed No. 73 jersey and heartfelt thanks during a classy news conference. The ceremony began with a video tribute and was highlighted by a lengthy prepared speech from the guest of honor, a man known for keeping his sentences short and for his aversion to talking to the media.

“I played this game because I loved the game," Yanda said. “I love competing, I loved the teammates and the struggle and the grind. I loved that every single day. That's why I played."

So why walk away now, only a couple months removed from a season in which he was completely healthy, played in the Pro Bowl and was voted second-team All-Pro?

“I've watched guys as they got older lose a little bit more each year, and then by the end they were almost like a liability. In the back of mind I said I never wanted to be like that," said Yanda, 35, who was surrounded on the stage by executive vice president Ozzie Newsome, general manager Eric DeCosta and coach John Harbaugh.

“I wanted to be up here with these guys wanting me back, rather than being at the other end of it saying, 'We're happy you're retiring,'" Yanda said. “I wanted to end playing well."

Yanda played in 177 games, tied with Jonathan Ogden for most in franchise history among offensive linemen. After a 2017 season in which ankle and shoulder injuries limited his playing time to two games, he began to think about what life might be after football.

“It was in my mind the last two years. And then (last) year, I felt that if I made it through healthy again, that no matter what happened that this was probably going to be it," Yanda said.

He stuck with the plan even though Baltimore went 14-2 in 2019 and has the potential to go the distance next season.

“I never had as much fun as I had last year," Yanda said. “To be a part of that team was special, but being able to walk away from the game on my terms is so meaningful. I'm glad I can do it my way."

Yanda took some time to make sure that was the route he wanted to take, but there would be no change of heart. Almost immediately after Baltimore's season ended with a loss to Tennessee in the playoffs, he started a diet and upped his cardio training. The result was a 45-pound weight loss that left Yanda at 265 and looking more like a linebacker than a burly offensive lineman.

“I feel so much better already, just going up and down the stairs," he said.

After growing up on a farm in Iowa, Yanda played two seasons of junior college football and two seasons at the University of Iowa before coming to Baltimore as a third-round draft pick in 2007. He helped the Ravens win a Super Bowl in 2012, has been assured a place in the team's Ring of Honor, and will probably end up joining Ogden and Newsome in the Hall of Fame.

“He was tough, competitive, smart and had a unique respect for the game as well as his teammates," Newsome said. “I know sometime in the future, as I've been told, you'll be getting your mail in Canton."

Harbaugh said of Yanda: “He embraced every bit of his career, made the most of it and is, in my opinion, a first-ballot Hall of Famer."

When everyone was done talking, Yanda exchanged greetings with several of his former teammates, including Joe Flacco, Justin Tucker, Nick Boyle and Chris Chester.

And now, DeCosta must fill a huge hole on the offensive line with absolutely no hope of finding a replacement who will immediately be just as good.

“You can't replace a guy like Marshal. As great a player as he is, he's a better person and a leader," DeCosta said. “You hope you hit on someone who at some point can become that guy, but that's like a once-in-every-10 year type of thing."