Ravens' Harbaugh stands by 4th-down call in loss to Bills 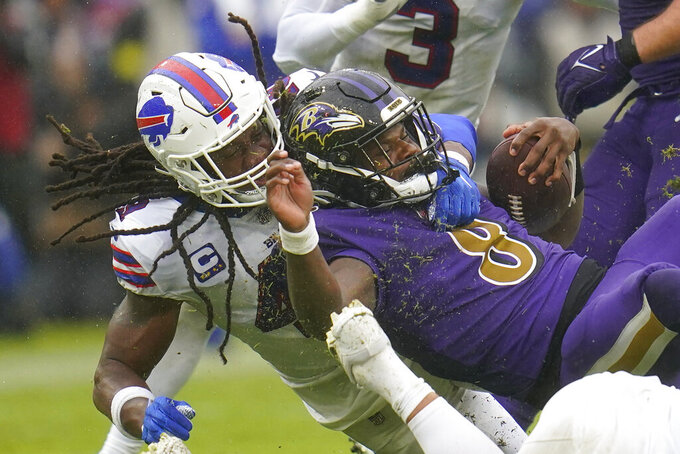 Baltimore Ravens quarterback Lamar Jackson (8) is brought down by Buffalo Bills linebacker Tremaine Edmunds in the second half of an NFL football game Sunday, Oct. 2, 2022, in Baltimore. (AP Photo/Julio Cortez)

OWINGS MILLS, Md. (AP) — John Harbaugh is standing firmly by his decision to go for it on a late fourth down last weekend.

“It's easy to make a safe decision that just puts it on the players,” the Baltimore coach said Monday. “You can do that. That's easy. I've just never been one to take that route.”

The Ravens lost 23-20 to the Buffalo Bills on Sunday. The Bills kicked the winning field goal with no time remaining — shortly after Baltimore's Lamar Jackson threw an interception on fourth down from the Buffalo 2-yard line. The decision to try for a touchdown in a tie game backfired on the Ravens.

Harbaugh explained his thought process Monday, much as he did in the immediate aftermath of the game. Obviously, taking a seven-point lead was preferable to going up by three, and he felt the downside risk was mitigated by the fact that if Baltimore failed on the play, the Bills would be pinned back near their own goal line.

What he didn't plan on was that Jackson would be chased back by the pass rush and, in an attempt to avoid a turnover on downs, force a pass into coverage that was picked off in the end zone. That gave Buffalo the ball at the 20 and presumably allowed the Bills to be more aggressive on offense than if they took over at the 2.

“I'm thinking either seven, or I'm thinking the ball's at the 2-yard line,” Harbaugh said. “And I really stand by that decision."

The bigger problem for the Ravens (2-2) is they're on a pretty poor run when it comes to converting these aggressive calls.

Baltimore lost six games in a row to finish last season. The Ravens missed a 2-point conversion at the end of a game at Pittsburgh and lost 20-19. They missed another 2-pointer at the end of a 31-30 loss to Green Bay. Last month, a key fourth-down stop helped Miami rally to a 42-38 win over Baltimore.

The Baltimore defense had some help from the rainy weather, but the Ravens did a good job limiting big plays against a dangerous Buffalo passing game. It took almost two full quarters for Josh Allen and the Bills to reach the end zone.

The Ravens could easily be undefeated, but they blew a 21-point lead to Miami and a 17-point lead to Buffalo — both at home. It was easy to pinpoint the main problem against the Dolphins. Baltimore allowed quick, long touchdowns that put Miami back in the game.

The issue against the Bills was less glaring. Certainly the Ravens' offense could have done more — they went scoreless in the second half — but they did finish with 38:10 of possession.

What came back to haunt Baltimore was problems finishing drives. Not only did the Ravens miss that late fourth down, they also settled for field goals a couple times in the first half when Buffalo was on the ropes.

After a pedestrian start to the season, second-year pass rusher Odafe Oweh had a sack and a forced fumble Sunday. There was some confusion at the end of the game when Oweh tackled a Buffalo ball carrier at the Baltimore 3 when the Ravens were trying to let him score — but Harbaugh said the runner may have been going down anyway.

“We coach them to pick the guy up and carry him in the end zone if they can,” Harbaugh said. “Odafe was in a situation where at that point he's not going to be able to pick him up. He's going to the ground, he's trying to punch the ball out. So I thought he did the right thing.”

Everyone has a quiet game now and then, and Mark Andrews had just two catches for 15 yards. That snapped a streak of 12 games with at least 50 yards receiving, which was one shy of the post-merger record held by Rob Gronkowski.

Harbaugh said WR Rashod Bateman was dealing with a foot issue. He also doesn't expect RB Justice Hill's hamstring injury to be a long-term problem. ... Harbaugh expects LB Tyus Bowser (Achilles tendon) to practice to some extent, but isn't counting on him for the next game. ... RB Gus Edwards (knee) is expected to start practicing.

7 — The number of consecutive losses for Baltimore in one-score games. The Ravens won six of those games in a row prior to the start of this skid, so they'll hope these close contests start swinging back in their favor soon.

Baltimore hosts Cincinnati on Sunday night in the team's first divisional matchup of the season. The Bengals beat the Ravens 41-17 and 41-21 last year.