Ravens hope to return to playoffs after injury-filled 2021 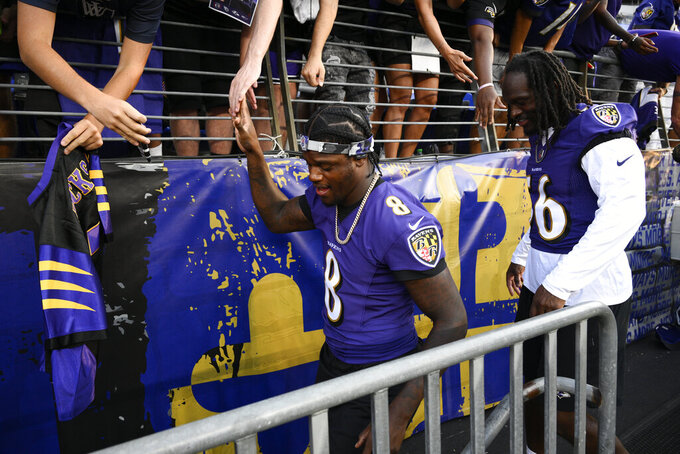 Baltimore Ravens quarterback Lamar Jackson, left, and linebacker Josh Bynes head to the lockers after watching their teammates workout prior to an NFL football game against the Tennessee Titans, Thursday, Aug. 11, 2022, in Baltimore. (AP Photo/Nick Wass)

Key losses: The Ravens dealt with tragedy in June when LB Jaylon Ferguson died at age 26, a loss that transcends the normal roster turnover a team goes through in the offseason. Baltimore observed a moment of silence in Ferguson's honor before its first preseason game. Other players who aren't back include WR Marquise Brown, P Sam Koch, T Alejandro Villanueva, WR Sammy Watkins, C Bradley Bozeman, CB Tavon Young and DE Derek Wolfe.

Strengths: Lamar Jackson won league MVP honors three years ago and showed flashes of that ability last season as well before missing the final four games with ankle issues. The Ravens were decimated by injuries last year but still contended for the division title, an indication of what's possible if they have better luck in 2022. Justin Tucker is one of the greatest kickers the game has seen, giving Baltimore quite an option in close games.

Weaknesses: The Ravens had problems on the offensive line a season ago, thanks in part to the fact that tackle Ronnie Stanley hardly played at all. If his health doesn't improve, the left tackle spot could be a concern. Baltimore also traded receiver Brown for a first-round draft pick, meaning there will be pressure on second-year man Rashod Bateman to step up. The Ravens didn't add any big-name replacements at receiver.

Camp Development: Rookie tight end Isaiah Likely has made quite an impression. He caught eight passes for 100 yards in a preseason game against Arizona. Backup quarterback Tyler Huntley, who had to fill in quite a bit for Jackson last season, has also been sharp in exhibition games.

Fantasy Player To Watch: Bateman had 46 catches for 515 yards in 12 games as a rookie, and now he doesn't have to compete with Brown for targets. If he and Jackson can both stay healthy, he could enjoy a jump in production.

Expectations: The Ravens were among the group of teams that could reasonably shoot for a Super Bowl appearance before last season, and if you view 2021 as an injury-fueled aberration, those kinds of hopes are still plausible. Certainly anything less than a playoff spot would be a disappointment.