Ravens’ Jackson masters art of winning while having fun 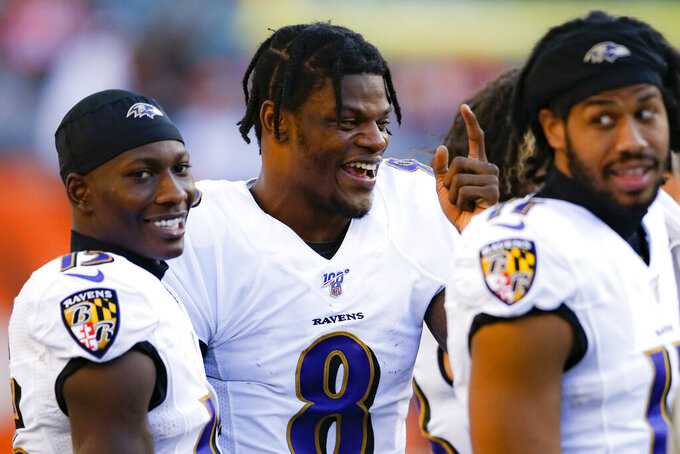 Baltimore Ravens quarterback Lamar Jackson, center, laughs on the sidelines during the second half of NFL football game against the Cincinnati Bengals, Sunday, Nov. 10, 2019, in Cincinnati. (AP Photo/Gary Landers)

OWINGS MILLS, Md. (AP) — There are times when Lamar Jackson displays the style and exuberance of a youngster playing football on the street with friends.

Seemingly unaffected by the responsibility of being an NFL starting quarterback, Jackson relishes the opportunity to run, pass and match wits with opposing defenses. And when he’s all done, the Baltimore Ravens star just might flip on a pair of sunglasses and pose on the sideline with his teammates.

Such was the case last Sunday, when the versatile Jackson achieved a perfect quarterback rating and peeled off a can’t-top-this 47-yard touchdown run in a 49-13 rout of the Cincinnati Bengals.

For a new generation of NFL quarterbacks, staying in the pocket is merely an option.

“It's pretty cool,” Jackson said Wednesday. “We're just doing our thing: playing ball, having fun, doing what all of us did when we were just little kids.”

With Jackson as the driving force, the Ravens (7-2) have won five straight and established themselves as a Super Bowl contender. Now in his second season, the former Louisville standout is 13-3 as a starter and the focal point of a team that leads the league in scoring, rushing and with a 76.9% conversion rate on fourth down.

Jackson is the only player in NFL history to amass 2,000 yards passing and 700 yards rushing through a season’s first nine games. In the high-stakes world of pro football, Jackson is keeping it low key.

Jackson stepped out of character against the Bengals, grabbing a pair of sunglasses from head athletic trainer Ron Medlin and hamming it up in a hilarious photo with teammates Marlon Humphrey, Ron Stanley, Mark Ingram and Marquise Brown.

“When you're winning and guys are making plays, it's just contagious, the happiness, the joy,” Ingram said. “We all love playing football, we love winning and we love watching our teammates making plays. I don't know how we got those glasses on, but this team is a special group.”

And, to be sure, Jackson is a unique quarterback. His second perfect quarterback rating of the season (15 for 17, 223 yards, 3 TDs, 0 INTs) was impressive, but that 47-yard frolic through the Cincinnati defense might be the play that all past and future quarterback runs will be measured against.

Ingram was right there when it happened, and he’s watched it so many times on film that he can describe the action from memory.

“It was crazy,” Ingram said. “He made the right read, got away from (defensive end) Carlos Dunlap, hit the safety, dead-legged him, three guys pursuing, he spun inside of them and then the acceleration just to get to the end zone. Yeah, you’ve got to go into the archives to see something better than that. It was wild.”

That was the Lamar Jackson that won the Heisman Trophy in 2016 and the one his mom appreciated from an early age.

“She just said I'm finally playing how I used to play,” Jackson said.

Truth is, Jackson’s improvement from his rookie year can be attributed to his prowess at passing. If a team dares to stack the line to make him throw, Jackson will gladly accept the invitation and make the defense pay.

Jackson is the toast of Baltimore these days. The fans swarm him at shopping malls, fast-food joints, anywhere he might happen to be.

“Baltimore loves the players and we appreciate it. We love them back,” Jackson said. “So it's all good.”

“Football starts with the quarterback,” coach John Harbaugh said. “That’s what he signed up for. That team has Lamar’s back. But just as quickly as (the media) pat you on the back, they’re going to slice your Achilles just like that.”

Unless, of course, Jackson continues to improve. He is, after all, only 22 years old.