Ravens, Jackson seek to lift offense to a higher level 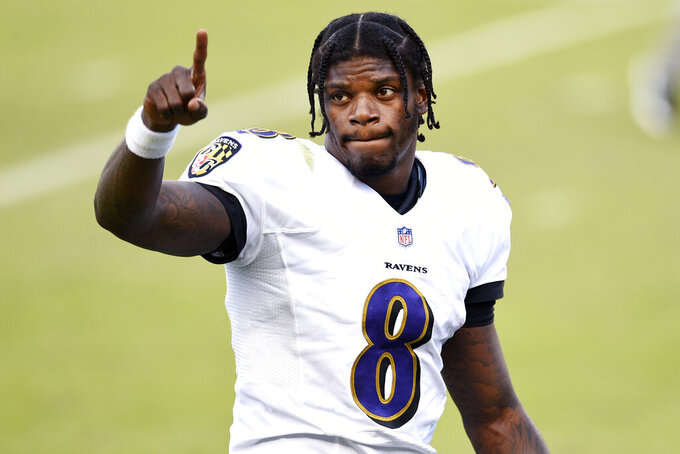 Baltimore Ravens' Lamar Jackson reacts as he walks off the field after winning an NFL football game against the Philadelphia Eagles, Sunday, Oct. 18, 2020, in Philadelphia. (AP Photo/Derik Hamilton)

The Baltimore Ravens chugged into their bye week leading the NFL in scoring, boasting a league-best plus-75 point differential and with a 5-1 record that puts them in contention to earn the top seed in the AFC for the second year in a row.

Yet, something about the offense seems just a little bit out of whack — especially when compared to the unit that last year set several NFL records under the guidance of MVP Lamar Jackson.

Opposing defenses are stacking the line in an effort to quash a running game that last season amassed an unprecedented 3,296 yards. Jackson accounted for 1,206 of them, the most ever by a quarterback, and Baltimore went 14-2 while averaging a league-best 33.2 points per game.

The bar was set incredibly high, and this year the Ravens have not yet climbed to that level. The rushing attack ranks third, but Baltimore's offense is 26th and only the Jets average fewer yards passing per game.

So the offense has some work to do before returning for a pivotal five-game stretch that includes two matchups with the AFC North-leading Steelers, a visit to New England, and a home encounter against the Tennessee Titans, who ousted the Ravens from the playoffs last January.

“Sure, we’re not where we want to be. I don’t think we were necessarily where we wanted to be last year at this time, either," coach John Harbaugh said. “It definitely is a work in progress. We have to improve."

Coming into the season, the Ravens knew they'd be facing defenses designed to stop the read-option. Jackson's still getting his yards on the ground — he leads the team in rushing — but he's not clicking on the deep pass that would force the opposition to back off the line. With 10 touchdown passes, Jackson is on a pace to fall short of matching the 36 he tossed in 2019.

Jackson has been sacked 15 times, just eight fewer than all last season. Rookie Tyre Phillips has played decently at right guard, but he's not made up for the loss of retired eight-time Pro Bowl guard Marshal Yanda, who provided leadership, pass protection and huge holes for the running game.

That just might be the biggest reason why the Ravens have failed to pick up where they left off from 2019. For instance, Mark Ingram, who ran for 1,018 yards last year and averaged 5 yards a carry, has only 225 yards and a 4.5 average.

“If you want to make the comparison, that’s it," Harbaugh said. “Marshal played at a Hall of Fame level for years, but especially last year. I really think, in a lot of ways, last year was his best year. He was dominating. He was blocking two guys often times in the run game. That’s part of it, sure.”

Although the offense seems a bit askew and Jackson hasn't reached the 200-yard mark passing since Week 2, the Ravens have a better record than after six games last year and have averaged 29.3 points during their current three-game winning streak.

“We did a lot of great things the past few weeks," Jackson noted. “I’d say what we didn’t do is finish drives -– scoring a lot of touchdowns. Last year we picked it back up after our bye week. So, hopefully it will be similar to that.”

Baltimore closed the 2019 season with 12 straight wins. That may not happen this year, and the offense almost certainly won't break the records it set last season while becoming the first team in NFL history to average 200 yards passing and 200 yards rushing.

But the Ravens won't have to rely solely on Jackson to win, because the defense has emerged as one of the best in the league. General manager Eric DeCosta made a sound unit even better on Thursday, trading draft picks to Minnesota for sack specialist Yannick Ngakoue.

After getting seven sacks two weeks ago against Cincinnati and six more against the Eagles, Baltimore has an ample pass rush to go with a backfield that includes All-Pro Marlon Humphrey and Pro Bowl cornerback Marcus Peters.

That should be enough to get the Ravens back into the postseason for a third straight season and provide Jackson the opportunity to earn his first career playoff victory.