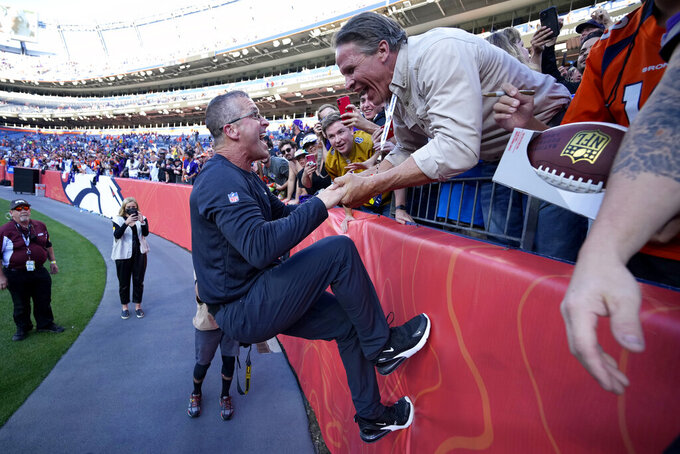 DENVER (AP) — Lamar Jackson won this one with his right arm. He used his quick feet to crown Baltimore's 23-7 thumping of the Denver Broncos and tie an NFL rushing record.

The Ravens (3-1) were in danger of coming up just short of matching the Steelers’ longstanding mark for consecutive games with at least 100 yards rushing before Baltimore cornerback Anthony Averett intercepted Broncos backup QB Drew Lock in the end zone with 3 seconds left.

Rather than take a knee, Jackson took the shotgun snap and hustled around left end for 5 yards as time expired. That gave the Ravens 102 yards on the ground, their 43rd consecutive 100-yard rushing game, tying the mark set by Pittsburgh from 1974-77.

“Oh yeah, 100% my call,” Ravens coach John Harbaugh said unapologetically. "That’s one of those things that’s meaningful. As a head coach you have to be mindful of your team and your players and what it means to them. It’s a very, very tough record to accomplish and it’s a long-term record.

Harbaugh's players appreciated their coach letting them go for the record.

"Whenever you’re in the record books it’s important, so it’s great to get it, said receiver Marquis Brown, who caught Jackson's 49-yard TD pass one week after dropping a trio of long passes.

Jackson missed two practices last week with a sore back, but it didn't look as if it affected him at all Sunday.

Although he was held to 28 yards rushing, Jackson threw for 316 yards.

“We wanted to limit his opportunities to carry it and scramble," Broncos coach Vic Fangio said. "We did that. But they were able to complete the long passes, which negated that.”

Only twice in his four-year NFL career has Jackson passed for more yards, once in the regular season (324) and once in the playoffs (365).

Justin Tucker, who beat the Lions last week with an NFL-record long 66-yard field goal, was perfect from 40, 46 and 20 yards in Denver's thin air.

The Broncos (3-1) punted on 10 of their 12 possessions after punting just nine times total in their three wins. They lost starting QB Teddy Bridgewater to a concussion on his final pass of the first half.

Neither was cornerback Tavon Young whistled one play earlier for hitting a defenseless receiver when his brutal hit sent WR/KR Diontae Spencer from the game with an injury to his sternum.

The injuries occurred during a series of curious calls by Broncos offensive coordinator Pat Shurmur, who had Bridgewater throw three times after Denver got the ball at its 17 with 1:02 left in the first half and Denver down 14-7.

All three throws fell incomplete — Bridgewater completed just 7 of 16 passes after posting 75% days in each of Denver's three wins — and the Broncos punted the ball back to Baltimore with Tucker warming up on the sideline.

Devin Duvernay's 42-yard return set up Tucker for an easy 40-yarder as the first half expired, giving the Ravens a 17-7 halftime lead.

One play after bouncing a short pass to Sammy Watkins, Jackson wound up and hit Brown with the 49-yard touchdown pass that put Baltimore ahead for good 14-7 in the second quarter.

Noah Fant caught a 3-yard TD pass from Bridgewater to put Denver on the board and the Ravens responded with a long drive capped by Latavius Murray's 11-yard touchdown romp that tied it at 7.

Fant's TD was set up by rookie Javonte Williams' 31-yard run in which he broke five tackles before cornerback Marlon Humphrey finally knocked him down. Williams led the nation in broken tackles last year at North Carolina.

The Ravens had five sacks and middle linebacker Tyus Bowser sacked both Bridgewater and Lock. Broncos rookie safety Caden Sterns had two of Denver's three sacks. Von Miller, the AFC's Defensive Player of the Month in September, shared the other sack with McTelvin Agim.

Miller noted the difficulty of facing Jackson and his big-play passing abilities combined with the Ravens' exotic run packages.

Ravens RT Alejandro Villanueva hobbled off in the third quarter with a knee injury. His replacement, Andre Smith, was flagged for a face mask away from the play that negated TE Mark Andrews' 30-yard TD reception. Bridgewater is the eighth starter to get hurt for the Broncos. The medical staff also was working on rookie CB Patrick Surtain II's upper ribcage in the closing minutes.