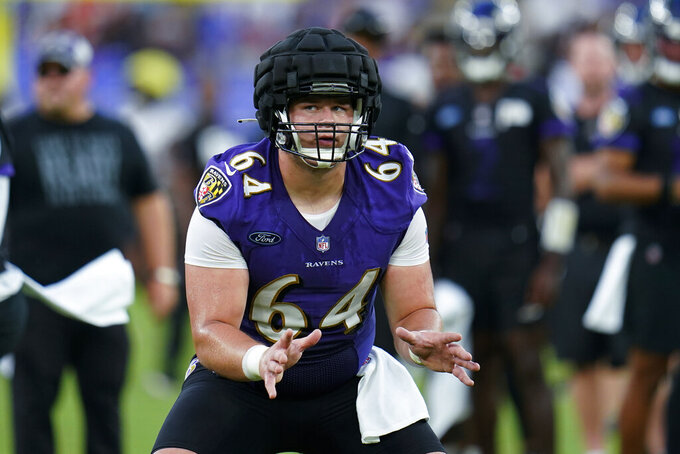 Biegel was carted off toward the very end of practice.

“He's a veteran guy. It's his third season-ending injury in three years — New Orleans, Miami and now here, so that's really unfortunate for him," Harbaugh said.

Harbaugh said he thought the 29-year-old Biegel had a good chance to make the team before his injury.

It happened that Thursday was also the day tackle Ja'Wuan James was scheduled to speak to reporters. James missed all of last season after tearing his own Achilles. He's back now, but Baltimore linebackers David Ojabo and Tyus Bowser — and now Biegel — are recovering from that injury.

Linderbaum is a first-round draft pick out of Iowa. The Ravens took him with their second of two first-rounders this year.

“I feel like he caught on really fast. To be a center, especially in this offense — this offense has a lot of verbiage, a lot of plays,” James said. “He came back and he knew everything he had to do. He really showed up when the pads came on. You could tell that wrestler in him, wanting to be physical.”

Harbaugh said Linderbaum has had an X-ray and would have an MRI, but all indications are his injury isn't serious.

The Ravens are hoping for significant improvement on the offensive line this season, although there are still health questions, mostly surrounding tackle Ronnie Stanley. James, who hasn't played since the 2019 season when he was with Denver, could fill an important role at left tackle if Stanley continues to struggle with ankle problems.

James signed a two-year deal with Baltimore before last season, when it was clear he wouldn't be back for a while. He never did play in 2021.

Harbaugh said Stanley and cornerback Marcus Peters (knee) are unlikely to be back in the next week. Running back J.K. Dobbins (knee) could return sooner.

“J.K. is a little more of a hurry, because he’s making it a hurry. He wants to get back out there,” Harbaugh said. “We’ll look at it again Monday and see where we’re at Monday. Maybe he starts doing something like individual — maybe not. It will be up to the doctors.”