Ravens must overcome turnovers and loss of Stanley, Humphrey 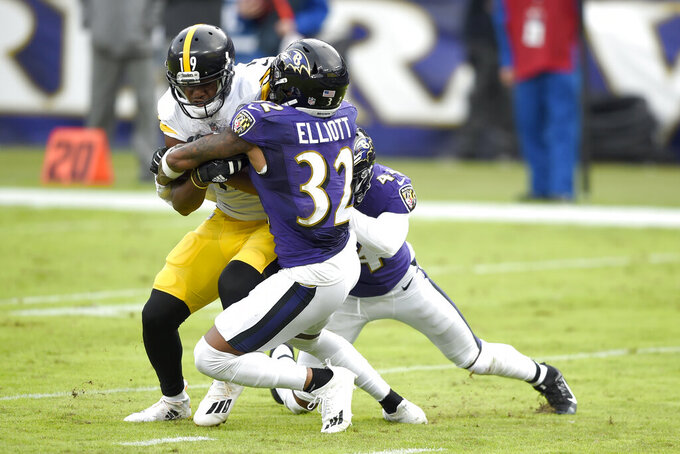 Life in the NFL is a week-to-week endeavor, except perhaps during those times when an assortment of bad things occur in the span of 24 hours.

On Sunday morning, the Baltimore Ravens were a once-beaten team with the opportunity to gain a share of first place in the AFC North. Then, All-Pro left tackle Ronnie Stanley sustained a season-ending ankle injury against the unbeaten Pittsburgh Steelers, who went on to win 28-24 to open up a two-game lead over Baltimore, the defending division champs.

As if that wasn't bad enough, Ravens coach John Harbaugh was informed early Monday morning that All-Pro cornerback Marlon Humphrey tested positive for the coronavirus and would miss this Sunday's game against Indianapolis.

That means the Ravens (5-2) will be short-handed on the offensive line for the remainder of the season and in the defensive backfield for at least a week. There is also no assurance that starting running back Mark Ingram will have recovered from the high ankle sprain that kept him out of the Pittsburgh game.

Baltimore came into the season looking to replace eight-time Pro Bowl right guard Marshal Yanda, which they did with rookie Tyre Phillips. Things were going OK until Stanley went down and Phillips also left the Pittsburgh game with a high ankle sprain that leaves his status for Sunday's game in flux.

After Stanley and Phillips left, Orlando Brown Jr. moved from right tackle to left tackle and Patrick Mekari stepped in for Phillips. Baltimore ended up with 265 yards rushing, but four turnovers by quarterback Lamar Jackson doomed the Ravens against their biggest rivals.

The defensive backfield, already a work in progress after safety Tavon Young's season-ending knee injury in Week 2, will be short-handed Sunday against Philip Rivers and the Colts (5-2).

“We have good depth back there," Harbaugh insisted. “It is being tested. Losing Tavon kind of brought us back a little bit, and now with Marlon. But I do believe the young guys are going to step up and play well."

The defense deserved little blame for Sunday's defeat. Sure, the Steelers scored 28 points, but they had an interception return for a touchdown and had another score set up by a pick.

Baltimore yielded only 221 yards and no drives of more than 57 yards.

The Ravens' passing game took another step backward, even though Jackson passed for more than 200 yards for the first time since Week 2.

Jackson finally got Willie Snead involved, but he virtually ignored Marquise Brown, targeting the speedster only twice and hitting him once for a 3-yard touchdown.

After the game, Brown sent out a tweet that asked: “what's the point of having souljahs when you never use them (Never!!)"

Harbaugh texted him about the tweet, and Brown subsequently removed it.

Rookie running back J.K. Dobbins took advantage of Ingram's absence to run for a career-high 113 yards, averaging 7.5 yards per carry. He also caught one pass for 8 yards.

Jackson has won many a game for the Ravens, but in this one he threw two interceptions and fumbled three times, losing two of them.

“There's nothing that tilts the scales toward success or failure in football than turnovers," Harbaugh said. “We have not done a good enough job of that of late. We have to be a lot better with protecting the football."

Stanley, who signed a five-year extension last week, will undergo surgery on his left ankle. “It looks like a good prognosis, long term," Harbaugh said. “I've been told he'll probably be back in May."

24-5 — That's Baltimore's record in the regular season with Jackson as its starting quarterback. Three of those defeats came against Kansas City, and now he's 1-1 against the Steelers.

It's difficult to get a handle on the Colts, who are tied for first place in the AFC South and are 3-0 at home, but have lost to Jacksonville and the Browns.