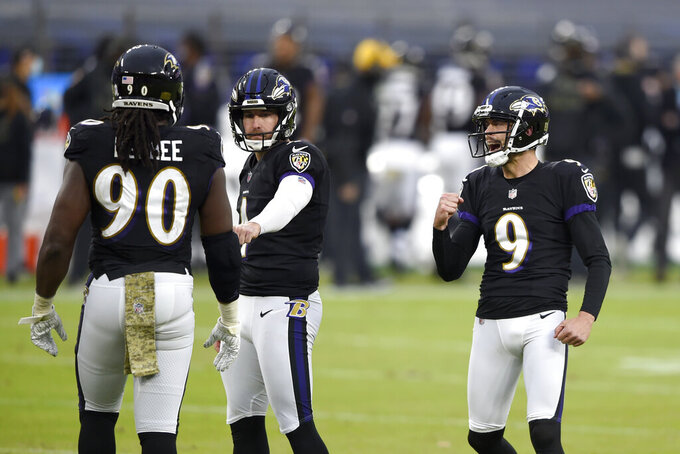 Baltimore Ravens kicker Justin Tucker reacts after kicking a field goal during the second half of an NFL football game against the Tennessee Titans, Sunday, Nov. 22, 2020, in Baltimore. The Titans won 30-24 in overtime. (AP Photo/Gail Burton)

STREAKS, STATS AND NOTES — The game was moved by the NFL from Thursday night to Sunday afternoon and then to Tuesday night and finally Wednesday afternoon because of Baltimore's coronavirus issues. ... The game is the first NFL contest to be held on a Wednesday since the 2012 season opener between the New York Giants and Dallas Cowboys. ... The schedule shuffling forced Pittsburgh's visit from Washington to be moved from next Sunday to Monday, while the Ravens will host Dallas next Tuesday instead of this Thursday. ... The move means the NFL could play at least one game on each day of the week. Minnesota and New Orleans are scheduled to play on Christmas Day, which is a Friday. ... The Steelers are the 17th team since 1970 to start a season 10-0. Their 10-game winning streak is the second-longest single-season string in franchise history. The 1975 team won 11 straight games on its way to the team's second straight Super Bowl title. ... Pittsburgh is looking for just its third season sweep of the Ravens since 2008. The Steelers rallied from a 10-point halftime deficit in the first meeting behind two touchdown passes from Ben Roethlisberger and a defense that forced Ravens QB Lamar Jackson into four turnovers. ... The series ranks among the NFL's best because the perennial AFC North powers play close contests. Eight of the past 11 meetings have been one-score games. ... Baltimore will play without Jackson and both centers, Patrick Mekari and backup Matt Skura, all of whom are on the reserve/COVID-19 list. ... Ravens backup QB Robert Griffin III will start in place of Jackson. Griffin led the Ravens by the Steelers in the 2019 regular-season finale. ... Pittsburgh leads the NFL in fewest points allowed (17.4 per game). Baltimore is third (19.5). ... Steelers coach Mike Tomlin ranks second and Ravens coach John Harbaugh is fifth in winning percentage among active NFL coaches. ... The Ravens have lost two straight and three of four. Each of those three losses have been by six points or fewer. ... The Ravens have rushed for at least 100 yards in 33 straight games, 10 short of the NFL record held by Pittsburgh (1974-77). ... Baltimore has scored at least 20 points in 32 of its past 33 games, the exception a 17-point performance in the rain at New England two weeks ago. ... Ravens WR Dez Bryant had four catches last week, his first receptions in an NFL game since Dec. 31, 2017, with Dallas. ... Jackson is 25-7 as a starter during the regular season, but three of those defeats have come in the past month. ... Jackson is Baltimore’s leading rusher with 575 yards. Rookie J.K. Dobbins is second with 380. ... Baltimore K Justin Tucker owns a 91% success rate on FG tries, the best in NFL history. He’s 19 for 20 this year, the lone miss from 61 yards. ... Rookie LB Patrick Queen leads Baltimore with 70 tackles, including two sacks. ... The Steelers have a sack in 67 straight games, the second-longest streak in NFL history. ...Pittsburgh leads the NFL in sacks (38) and takeaways (21). ... Pittsburgh's running game took a step forward last week against Jacksonville, going over 100 yards for the first time since Oct. 18, but the Steelers will be without RB James Conner, who is on the reserve/COVID-19 list. ... Steelers QB Ben Roethlisberger is spreading the wealth; six players have at least 20 receptions. ... Pittsburgh's offensive line has done an excellent job protecting the 38-year-old Roethlisberger. He hasn't been sacked in 148 straight dropbacks, the longest stretch of his career. Fantasy tip: Roethlisberger hardly seems to be impacted by cold weather. He has thrown 95 touchdown passes in 61 career games in December and with Conner out will likely put it up early and often.