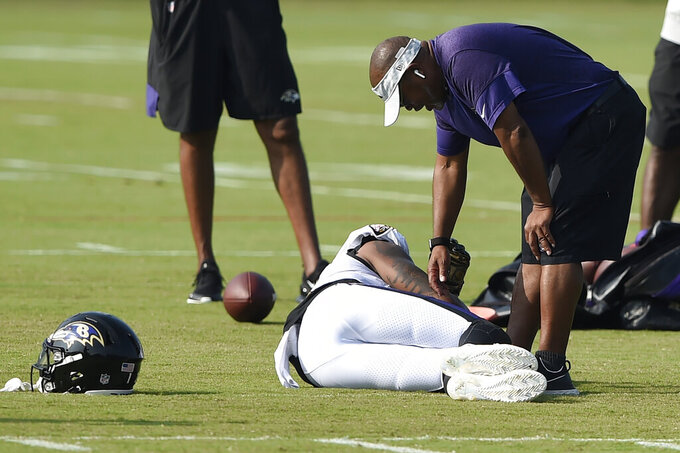 Right now, those three players are having a hard time getting on the field.

Watkins, Brown and Bateman weren't practicing Tuesday, three days after none of them played in Baltimore's preseason opener against New Orleans. Bateman is out until September because of groin problems, and Brown has been limited by hamstring issues. Coach John Harbaugh didn't elaborate on what Watkins was dealing with, but he said Monday it was nothing serious.

“We just have to keep going,” said receiver Devin Duvernay, who caught four passes against the Saints. “We know we all have an opportunity here. We all look at it as an opportunity and just keep trying to improve every day on those extra reps.”

Brown is the team's top returning wide receiver after catching 58 passes for 769 yards and eight touchdowns last season. A first-round draft pick in 2019, he's established himself as a consistent threat in Baltimore's offense, even as the Ravens ranked last in the NFL in passing last season and 27th the year before that.

Watkins is the top newcomer, a former 1,000-yard receiver who was a part of Kansas City's Super Bowl title a couple of seasons ago. If he's missing time with an injury, though, that's concerning. He played in only 10 games last season and has appeared in 16 just once in seven years.

Bateman was a first-round pick this year after an impressive college career at Minnesota, but his acclimation to the pros is now being impacted by his own injury problems.

The health concerns for those three players have opened some opportunities for the rest of the receiving group. Jaylon Moore, who spent his rookie season on the practice squad last year, was targeted five times against New Orleans. Binjimen Victor caught a couple of passes and James Proche II caught one.

A sixth-round pick in 2020, Proche contributed more last season as a punt returner than as a receiver.

“Something me and my brothers always talk about is trusting your journey,” Proche said. “I saw a clip where this dude got drafted into the NBA, and he was 24, and Devin Booker is 24 and been in the league (six) years. You've got to trust your journey. It's not one single script for everybody.”

Although there is value in building depth and having players such as Proche get opportunities during the preseason, the Ravens don't want to go too long without Watkins, Brown and Bateman. They were already without star quarterback Lamar Jackson at the start of camp because of a positive COVID-19 test.

Now he is back, but he doesn't have a full set of receivers to work with.

The Ravens head on the road this week for joint practices with the Panthers, followed by a preseason game at Carolina on Saturday night. Jackson didn't play in the first exhibition game, and offensive coordinator Greg Roman indicated that his availability wouldn't necessarily be contingent on who else is able to play at receiver or on the offensive line.

“That's John's call, but I'd say it is a factor but not the factor," Roman said. “Lamar's making good progress, and I really like where he's at right now. But that decision's made somewhat independently."

NOTES: CB Marlon Humphrey limped off the field during practice Tuesday. ... There was no sign of any neck chain on defensive coordinator Wink Martindale when he spoke to reporters after practice, but he indicated it could be back on display soon. Martindale said he's always kept his chain hidden, but cornerback Tavon Young was encouraging him to “let it drip” — and Martindale said he would if the team forced two turnovers. They forced six against the Saints. “I guarantee you the chain will be out again Saturday night," Martindale said. “If that's what gets turnovers, I'll do anything.”