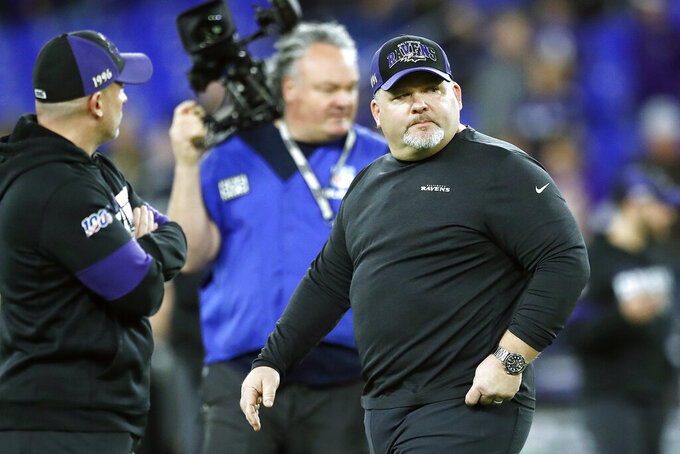 FILE - In this Jan. 11, 2020, file photo, Baltimore Ravens offensive coordinator Greg Roman looks on prior to an NFL divisional playoff football game against the Tennessee Titans, in Baltimore. Roman is tweaking and refining a record-setting unit led by NFL MVP Lamar Jackson, who is expected to again be the key component of an attack with several newcomers in the mix.(AP Photo/Julio Cortez, File)

Intent upon improving a record-setting attack and the play of NFL MVP Lamar Jackson, Ravens offensive coordinator Greg Roman is striving to overcome the obstacle of working from home and the inevitable adjustment of opposing defenses.

A year ago, Roman designed a run-oriented offense designed to take advantage of the versatile Jackson at quarterback. No one really knew what to expect when Baltimore opened the season at Miami.

“There were a lot of people who had questions about what this was going to look like — whether it would even work, whether it would fall flat on its face. That was real," Roman recalled Tuesday in a video conference with the Baltimore media. “A statement was made by these guys early on."

Jackson threw five touchdown passes and the Ravens racked up 643 yards in a 59-10 rout of the Dolphins. Baltimore would go on to lead the league in scoring, finish with the best overall record and set an NFL mark with 3,296 yards rushing.

“Everybody kind of answered those questions very loudly and proudly," Roman declared.

Jackson led the way by rushing for 1,206 yards, most ever in a single season by a quarterback. He also threw for 36 scores.

Now that the rest of the league understands fully how the Ravens' offense operates, Roman is working diligently to offset any potential defensive alterations.

“That’s something I think about every day, at least once a minute, how we’re going to put things together, how it’s going to look a little different," he said. “Especially in a season like this, you don’t want to get too far off the rails. You want to be selective with what you want to be different."

Because of the coronavirus pandemic, there were no minicamps and thus no opportunity for Roman to test some of the changes on the field.

When the Ravens assemble for training camp next month, they will have a retooled offensive line, four capable running backs and a revamped receiving group.

“We haven’t had the luxury of the OTAs to test-run certain things, so we’ve got to be really judicious with how we use that time at training camp," Roman said. “Experimenting this year is going to be very selective. We’ve tweaked, we’ve added, updated."

The positive aspect of all this is that the Ravens have Jackson, who's just as likely to take off on an impromptu run as he is to hand the ball to a back or fling it downfield.

Roman is counting on even bigger things from the 2016 Heisman Trophy winner, who will be entering his second full season as a starter.

“There’s a magic to his style and how he plays. We always want to focus on his creativity and energy," Roman said.

So what needs to improve?

“Accuracy, timing, vision," Roman said. “A steady upward tick in all those things."

The Ravens wouldn't mind if Jackson was a bit more prudent in how he spends this offseason, In a recent video, Jackson stumbles over a jet ski at the end of a run while playing on the beach.

“That’s between me and him," coach John Harbaugh said, “so it’s not something that I need to comment on publicly.”