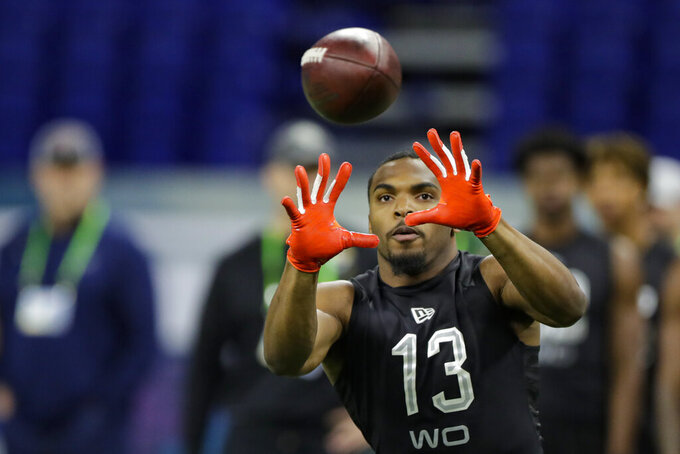 Then he went to work in the NFL draft.

Over the course of three days, DeCosta added several key pieces to a unit that led the league in scoring and rushing yardage last season.

DeCosta didn't ignore the defense. He secured LSU linebacker Patrick Queen in the first round and Ohio State linebacker Malik Harrison with the 98th overall pick. Either or both could fill the hole in the middle of the defense.

The Ravens also drafted a pair of defensive tackles, an extension of DeCosta's mission this offseason to improve Baltimore's run defense.

“We always want to be as strong as we can be on the offensive and defensive lines,” DeCosta said. “It’s important to us to control the line of scrimmage and be a physical football team.”

And finally, after making a trade that enabled him to get Proche in the sixth round, DeCosta selected Iowa safety Geno Stone with the 219th pick and Baltimore's 10th overall.

Dobbins and Duvernay are playmakers, but coach John Harbaugh was just as pleased about getting some extra blocking in front of slick-footed quarterback Lamar Jackson. Before the draft, the coach said, “We’ve got to make sure that we do a great job of making sure the interior offensive line is all set."

Third-round pick Tyre Phillips of Mississippi State is a 6-foot-5, 331-pound tackle who could easily make the shift to guard, much like Jonathan Ogden did as a rookie in 1996. Ogden, of course, ultimately became a Hall of Fame left tackle.

Drafted Saturday in the fourth round, Ben Bredeson played guard at Michigan under Harbaugh's brother Jim, and has the ability to play center.

The Ravens allowed 4.4 yards per carry last season before Derrick Henry ran for 195 yards for Tennessee in Baltimore's playoff defeat.

In an effort to improve that shortcoming, DeCosta got Calais Campbell in a trade with Jacksonville and signed free agent Derek Wolfe before continuing the process in the draft.

Justin Madubuike, a third-round pick from Texas A&M, will likely get plenty of playing time. The Ravens are looking for the same from fifth-round selection Broderick Washington Jr. of Texas Tech.

The Ravens did well utilizing the running back tandem of Mark Ingram, Gus Edwards and Justice Hill last year. So why nab Dobbins in the second round?

Because he was there.

“We didn’t anticipate it. We just had to take him," DeCosta said. “He’s just a talented guy and it made too much sense to take him.”

The Ravens emerge from the draft still looking for a strong pass rusher off the edge.

“You're always going to have a hole that stays open," DeCosta said. “We'll continue to try to fill those holes."

Madubuike has the potential to help.

“He did have sacks (5 1/2 in each of the past two years)," Harbaugh noted. “He had tons of pressures and tons of quarterback hits. He chased quarterbacks down and stuff like that."

Harbaugh was delighted with the technical aspect of the NFL's first virtual draft.

“I thought it went great. I give our IT guys all the credit in the world," he said. “It was perfect."

DeCosta felt that preparing for a draft without any visits from players, Pro Days or 1-on-1 interviews was a refreshing change.

“It was like an old-school, throwback draft," DeCosta said. “Sometimes you can get so much information that you over-analyze a little bit. So from that standpoint it was really easy to get prepared for this draft because we just sat in front of our machines and watched as much tape as we could. There's kind of a beauty to that whole process."