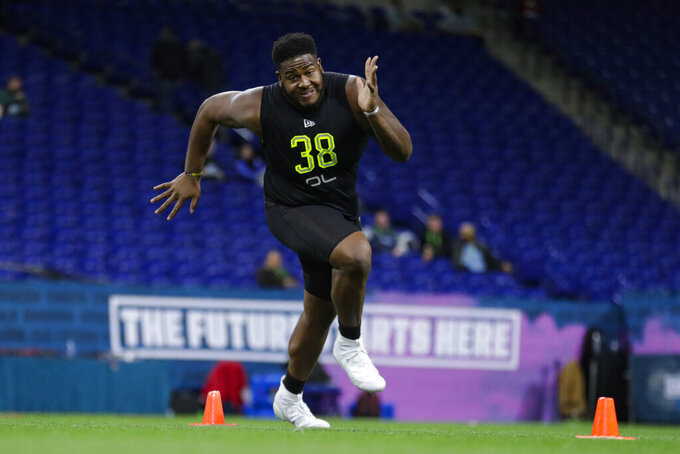 FILE - In this Feb. 28, 2020, file photo, Mississippi State offensive lineman Tyre Phillips runs a drill at the NFL football scouting combine in Indianapolis. In their quest to keep quarterback Lamar Jackson upright and running, the Baltimore Ravens have put a priority on fortifying their offensive line following the retirement of eight-time Pro Bowl guard Marshal Yanda. The Baltimore Ravens selected Phillips in the third round of the 2020 NFL Draft. (AP Photo/Michael Conroy, File)

It's unlikely that anyone will step in at right guard with the skill, experience and leadership that Yanda displayed during his 13th and final NFL season. The Ravens are hoping for a minimum drop-off in their effort to keep Jackson healthy and sustain a running attack that last year compiled a single-season record of 3,296 yards.

The concern up front extends beyond the loss of Yanda, who made the 2010-19 All-Decade Team and is a two-time All-Pro. Center Matt Skura finished the season on injured reserve and was replaced by rookie Patrick Mekari. That's one big reason Baltimore general manager Eric DeCosta picked two versatile offensive linemen in the draft: third-round selection Tyre Phillips of Mississippi State, and fourth-rounder Ben Bredeson of Michigan.

When the Ravens finally get back on the field, coach John Harbaugh will be looking for players to serve alongside left guard Bradley Bozeman and tackles Ronnie Stanley and Orlando Brown.

Phillips and Bredeson will be given the opportunity to step in right away, but they'll have to beat out Skura, Mekari and second-year pro Ben Powers.

“I think it's going to be a competition," director of player personnel Joe Hortiz said Tuesday. “We've got a lot of guys that are already here and on board. But I certainly think (Phillips and Bredeson) have the talent and ability to be right in the mix and compete for that job."

The 6-foot-5, 315-pound Bredeson started 46 games for the Wolverines at left guard. He played all five positions on the line during practice, however, and has no problem moving to the right side or in the middle of the line.

“I feel comfortable at really any of those interior three spots. Obviously, center is included with that," he said.

Phillips was a tackle at Mississippi State, but he’s confident he can make the switch to guard and brings an attitude that just might make him an immediate asset.

Bredeson understands completely the talent level of the player he might be asked to replace.

“Marshal Yanda is a legend. I’ve been watching him for years and years,” Bredeson said. “Being able to play on the same team that he once played on is kind of surreal. It’s a very cool feeling. The offensive line for Baltimore was outstanding last year."

The key to the Ravens' offensive success is Jackson, who threw 36 touchdown passes and set an NFL record for yards rushing by a quarterback last year with 1,206. Nothing is more important for the offensive front than to make sure that Jackson, the 2019 NFL MVP, stays healthy and productive.

“He’s a remarkable player, and I’m beyond excited to start working with him," Bredeson said. “It’ll be something different for me -– having a guy that’s so athletic and so skilled back there."