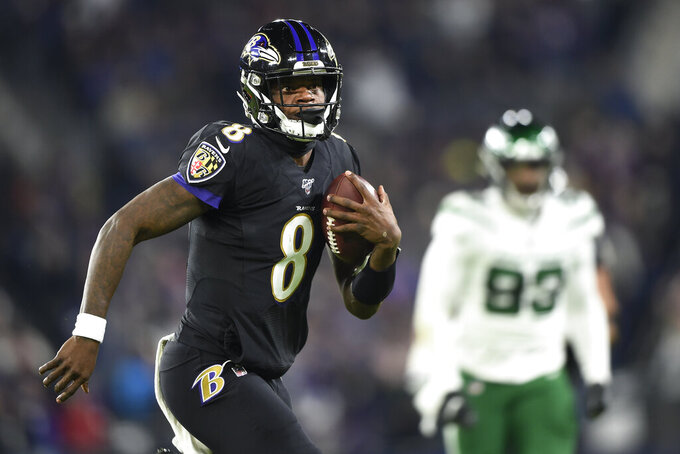 Baltimore Ravens quarterback Lamar Jackson (8) scrambles for yardage against the New York Jets during the first half of an NFL football game, Thursday, Dec. 12, 2019, in Baltimore. (AP Photo/Gail Burton)

NEW YORK (AP) — Lamar Jackson and the Baltimore Ravens have scored a perfect 10.

Led by their star quarterback, the Ravens extended their winning streak to 10 games and wrapped up the AFC North with a rout of the New York Jets last week.

With another win, the Ravens will clinch a first-round bye and home-field advantage throughout the AFC playoffs.

And the NFL's top team is once again the unanimous choice as the top team in the latest AP Pro32 poll. For the third consecutive week, the Ravens earned all 12 first-place votes for 384 points in balloting Tuesday by media members who regularly cover the NFL.

The New Orleans Saints moved up one spot to No. 2 after their dominating 34-7 win over the Indianapolis Colts on Monday night. Drew Brees became the NFL's all-time leader in touchdown passes, throwing for four scores. He completed 29 of 30 passes — 96.7 percent — for 307 yards before being relieved by Teddy Bridgewater in the fourth quarter.

The Seattle Seahawks also moved up one place to No. 3 after topping Carolina. And the San Francisco 49ers slipped two spots to No. 4 after their 29-22 loss to the Atlanta Falcons.

“The Seahawks rebounded nicely after being drubbed by the Rams, but the real test comes in the season finale against the 49ers,” said Ira Kaufman of Fox 13 in Tampa, Florida.

And the Kansas City Chiefs slipped a spot to No. 5 despite their 23-3 rout of the Denver Broncos at snowy Arrowhead Stadium.

The next four teams in the poll all kept their places from last week after wins: the Green Bay Packers at 6, the New England Patriots at 7, the Minnesota Vikings at 8, and the Buffalo Bills at 9.

The Bills head to Foxborough, Massachusetts, on Saturday to face the Patriots, who are trying to clinch the AFC East title for the 11th consecutive year.

And the Packers head to Minnesota for the final Monday night game of the season and can wrap up the NFC North with a win.

The Houston Texans moved up one spot to round out the top 10 after edging the Tennessee Titans 24-21. The Texans open Week 16 as they head to Tampa Bay to face the Buccaneers on Saturday afternoon. A win would give them their fourth division title in six years.