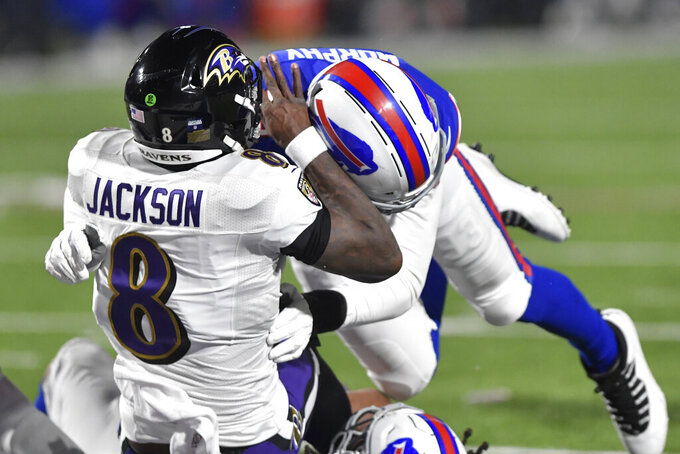 Baltimore Ravens quarterback Lamar Jackson (8) is hit by Buffalo Bills' Trent Murphy (93) during the second half of an NFL divisional round football game Saturday, Jan. 16, 2021, in Orchard Park, N.Y. Jackson was injured on the play. (AP Photo/Adrian Kraus)

A season in which the Baltimore Ravens overcame a long list of obstacles to reach the playoffs ended with their star quarterback stuck in the locker room during the fourth quarter and the rest of the team shuffling off the field to join him after a disheartening 17-3 defeat.

The Ravens and Lamar Jackson were stymied for the much of Saturday night by a hustling, relentless Buffalo defense. Yet, in spite of managing only a field goal in the first half, Baltimore moved within striking distance of scoring the tying touchdown late in the third quarter.

Then, the biggest miscue on a night of missteps for the Ravens effectively put an end to an otherwise memorable season.

Jackson targeted tight end Mark Andrews in the end zone and fired a pass that was intercepted by Taron Johnson and taken the other way for a 101-yard touchdown.

Jackson was knocked out of the game with a concussion on the following series, making a Ravens comeback bid as futile as spitting into the formidable wind that blew hard throughout the 17-3 defeat.

“It’s playoff football. With the wind and the way the game was going, you knew it was going to be a tough day," defensive tackle Calais Campbell said. “It was one of those games we knew was going to come down to one big play. They made the plays when it mattered, they made the big play. You’ve got to give them respect. They earned it."

The Ravens stormed into this second-round playoff game with a six-game winning streak generated by a strong offense and steady defense. But Baltimore failed to score a touchdown, not with Jackson taking the snaps nor with backup Tyler Huntley trying in vain to generate a rally.

Baltimore was done in by too many mistakes, most notably Jackson's ill-fated throw that produced a 14-point swing. The usually reliable Justin Tucker had two field-goal tries clang off the uprights, and veteran punter Sam Koch booted a wind-blown 23-yarder.

And if there was any hope of a miracle finish, it faded with a roughing-the-kicker call against Baltimore just after the two-minute warning.

The Ravens (12-6) reached the postseason after battling an outbreak of COVID-19, an altered schedule and season-ending injuries to starting tackle Ronnie Stanley and tight end Nick Boyle.

Baltimore closed the regular season with five straight win and opened the playoffs by stuffing Tennessee star running back Derrick Henry in a 20-13 victory. But the feel-good vibe vanished under a myriad of mistakes and untimely plays in Buffalo.

“It's a tough loss," coach John Harbaugh said. “To get to the (AFC) championship game, you've got to play two really great games and things have got to bounce your way. That didn't happen for us today.

“But I'm proud of the guys, nonetheless. I feel like what we've been through as a football team, the road we traveled this year, the challenges that we faced are all well documented. I feel like our guys handled it with toughness and grace. Even today, when we weren't at our best, we fought. We'll hold our head high walking out of here and into the offseason."

In the end, however, the Ravens got blown away on a windy night by a team that chased Jackson all over the field. In fact, it was almost surprising that Buffalo's defense didn't pursue the frustrated quarterback into the visitor's locker room after tackling him hard in the end zone on what turned out to be Jackson's final play of the season.

Baltimore's No. 1-ranked rushing game generated 150 yards, but Jackson was limited to 34 yards on nine carries with a long of 15 yards.

Throwing under duress for much of the game, Jackson went 14 of 24 for 162 yards with an interception and three sacks.

“He’s the ultimate competitor," receiver Willie Snead said of Jackson, who was understandably held out of the postgame media session. “He doesn’t like to lose. He’s doing all right. He’s going to be good. He’ll be all right."

The defense did a decent job against Josh Allen, but Stefon Diggs had eight catches for 106 yards and scored the game's lone offensive touchdown.

Linebacker Matthew Judon, who wore the franchise tag this season, expressed uncertainty regarding his future in Baltimore. Regardless of what happens, he will never forget this year.

“We had our ups and downs the whole season. This season was crazy. Everybody wearing masks and we can barely meet," Judon said. “It’s hard to go out like this, but I want everybody in the locker room to understand there can only be one winner. We just didn’t get some bounces and looks that we wanted and just came out short."