Ravens' secondary gets thinner with loss of S DeShon Elliott 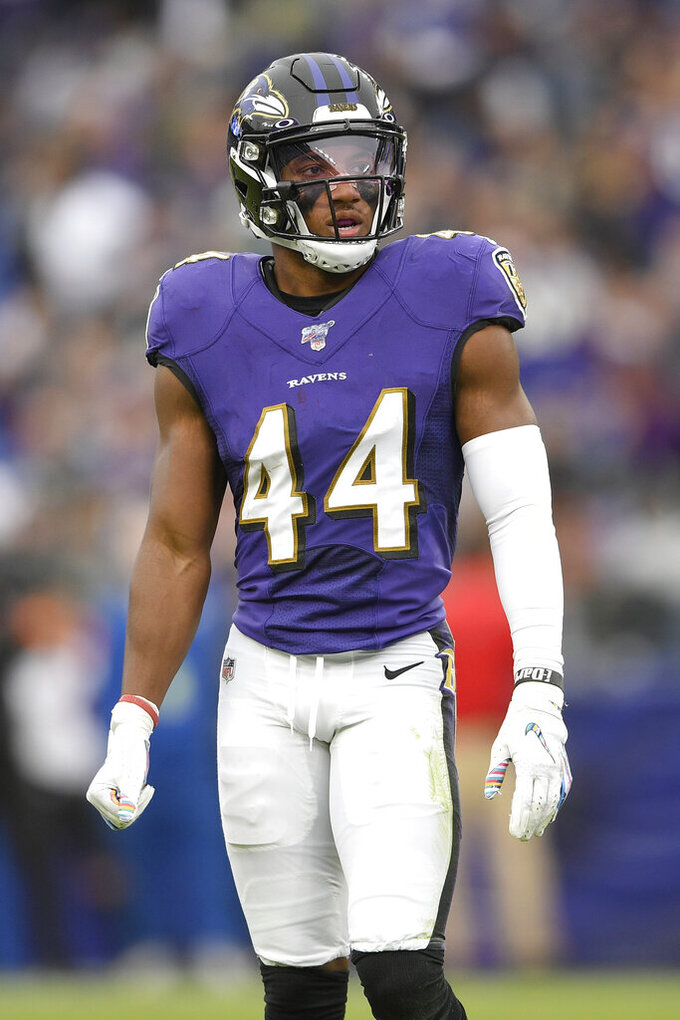 Baltimore Ravens cornerback Marlon Humphrey waits for a play against the Cincinnati Bengals during the second half of a NFL football game Sunday, Oct. 13, 2019, in Baltimore. (AP Photo/Nick Wass)

OWINGS MILLS, Md. (AP) — Injuries in the defensive backfield just keep on coming for the Baltimore Ravens, who likely will play without safety DeShon Elliott the rest of the season.

Coach John Harbaugh said Monday that Elliott suffered a serious knee injury in Sunday's 23-17 victory over the Bengals. It occurred late in the fourth quarter when Elliott collided with teammate Justin Bethel during Cincinnati's final drive.

"It looks like he's going to be out for the year, unfortunately," Harbaugh said. "It's just way worse than we thought it was going to be. So we'll have to find a replacement there and move forward."

In addition, cornerback Maurice Canady — who had a team-high nine tackles Sunday — hurt his hamstring and is "probably day to day," Harbaugh said.

The Ravens lost cornerback Tavon Young to a neck injury in August and cornerback Jimmy Smith hasn't played since the opener because of a sprained knee. Last week, Tony Jefferson was put on injured reserve with a torn ACL.

Harbaugh did not rule out the possibility of going outside the organization for help.

Injuries aside, the Ravens (4-2) are off to a solid start in their bid to repeat as AFC North champions. They hold a two-game lead over Pittsburgh and Cleveland and will be looking to extend that gap with a victory Sunday against the host Seattle Seahawks (5-1).

"The next game is critical," Harbaugh said. "It won't make or break us, but it will go a long way in setting us up for where we're heading down the road and what kind of season we're going to have."

After facing the Seahawks, the Ravens have a bye before hosting New England on Nov. 3.

The offense put up 497 yards against the Bengals, including a whopping 269 on the ground. Quarterback Lamar Jackson ran for 152 yards and passed for 236.

Even without Jackson's rushing yardage, Baltimore got 117 yards from its trio of running backs.

"You usually have a lot more passing yards in this league than running yards," Harbaugh said. "That makes us a little bit different."

With all that yardage against a winless team, the Ravens should have blown out Cincinnati. But tight end Mark Andrews fumbled while trying to hurdle an opponent and Baltimore was flagged 10 times for 81 yards.

"We had some penalties — way too many penalties — and we had the turnovers," Harbaugh said. "Those are the things that we're going to continue to work on."

Jackson did it all Sunday, zigging and zagging through the Bengals for his third career 100-yard game on the ground.

Left guard Bradley Bozeman was called for four penalties, including a block in the back and a hold.

This week, they'll play if they can practice, Harbaugh said.

Playing in his 118th game, Tucker set the record with a second-quarter field goal.

"I find the coolest thing about reaching this milestone is that I get to share it with Sam (Koch) who has held for every single one of those points, and Morgan (Cox), who has snapped for almost all of them," Tucker said.

Receiver Anquan Boldin, who played three seasons with Baltimore and helped the team win the 2012 Super Bowl, retired Monday as a Raven.

Boldin played with Arizona from 2002-09 before signing as a free agent with the Ravens. He had six catches for 104 yards and a touchdown in the Super Bowl vs. San Francisco.

During the following offseason, however, he was traded after the season in a salary-cap move by Baltimore.

"I was brought in to help bring a championship to this city. I accomplished that job," Boldin said at his retirement ceremony, which was attended by his family, Harbaugh, former general manager Ozzie Newsome, current GM Eric DeCosta and team president Dick Cass.

Facing the Seahawks will be a difficult challenge for the Ravens, beginning with containing quarterback Russell Wilson.

"He's made plays with his arms, with his legs, with his head," Harbaugh said. "I think he's the heart and soul of their offense, at least. Probably their team."