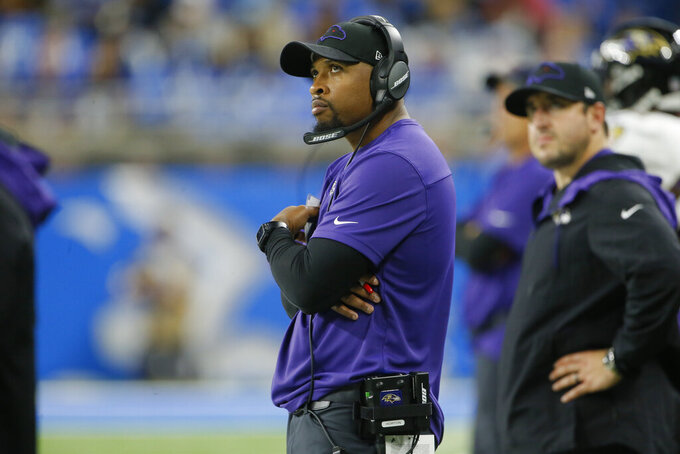 This was a trying season for the Baltimore Ravens. Injuries decimated them from start to finish on both sides of the ball, ultimately costing the team a playoff spot.

“I think anyone understands when the roster starts to get affected through injury, that special teams really is the unit that sometimes takes the brunt of it because the guys that you had playing for you now are playing on defense," Horton said. "You have to adjust and be able to put a new guy in there. What those guys did this year, and for us to play the way we played — really just a testament to how hard we work and really what we focus on.”

The 37-year-old Horton just finished his third season in charge of Baltimore's special teams. A former NFL safety, he started in Baltimore as a coaching intern eight years ago, and he's worked his way up to become the special teams coordinator for a franchise that's synonymous with excellence in that part of the game. His rise has been impressive already, and it feels like his coaching career is just beginning.

Horton was drafted in the seventh round by Washington in 2008. After his playing career, he ended up back at UCLA, his alma mater. He worked as a quality control coach under Jim Mora in 2012. The following year, he was a coaching intern with the Seattle Seahawks during training camp before spending the 2013 season with UCLA again.

Steve Jackson, who had been an assistant with Washington when Horton was there, told Horton he could come shadow him at the Senior Bowl. Horton eventually interviewed with Washington for a special teams assistant job, but when he didn't get it, it was back to square one.

So Horton wrote a cover letter, put together a resume and contacted all 32 NFL teams.

His big break came when the Ravens called him in to interview for an internship program. He was a coaching intern in 2014. The following year, he was a staff assistant alongside special teams coach Jerry Rosburg. He's worked with special teams ever since.

“It's the one role where I get an opportunity to communicate with every player on the team, and not just my side of the ball, or not just my position group," Horton said.

Horton succeeded Rosburg following his retirement in 2019, and the Ravens have remained strong on special teams. And that's not just because they have one of the game's all-time great kickers in Justin Tucker.

This season, second-year return man Devin Duvernay was an All-Pro. He was the only returner to rank in the top 10 in both punt return average and kickoff return average.

So this season should only help Horton's stock.

There are now five minority head coaches in the NFL. Approximately 70% of the players are Black. As a young Black assistant, Horton said the NFL's hiring record hasn't deterred him from pursuing a coaching path.

“I don’t think it was ever discouraging," he said. "Growing up, I’ve been challenged all my life. My mom always instilled in us, just take your opportunities, run with them, and just do a great job. And then whatever you’re supposed to get, you’re going to get. And then sometimes, whatever you’re supposed to get, you might not get, but you just keep your head down and you keep going.”

Although the kick teams coordinator is often overshadowed by the offensive and defensive coordinators, there's some precedent for coaches with backgrounds in special teams going on to bigger things. Bill Belichick first joined the New York Giants as a defensive assistant and special teams coach, more than four decades ago.

“You understand how to manage a team," Horton said. "You’ve got to learn to adapt when you don’t have players.”

So Horton's work with Baltimore's special teams is the type of experience that could serve him well in the future.

“I want to be a head coach," he said. "When that opportunity presents itself, it’s like hey, it’ll happen. But up until then, I’m going to make sure that the area that I’m in charge of is well taken care of.”