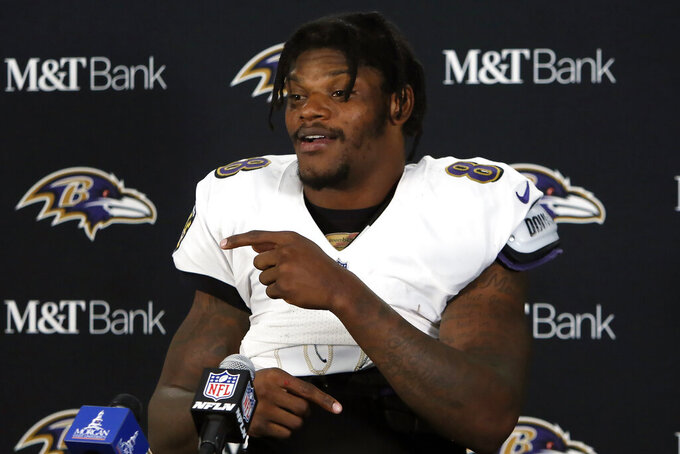 FILE - Baltimore Ravens quarterback Lamar Jackson speaks to the media after an NFL football game against the Detroit Lions in Detroit, Sunday, Sept. 26, 2021. The Ravens are working under Lamar Jackson's timeline when it comes to a potential contract extension. Jackson's contract status was at the forefront of news conference held by Baltimore general manager Eric DeCosta, Friday, Feb. 4, 2022. (AP Photo/Duane Burleson, File)

OWINGS MILLS, Md. (AP) — The Ravens are working under quarterback Lamar Jackson’s timeline when it comes to a potential contract extension.

Jackson’s contract status was at the forefront of a news conference held by Baltimore general manager Eric DeCosta. The 2019 NFL MVP is playing under a fifth-year option that will pay him $23.02 million this season.

DeCosta addressed several issues in his first news conference since the season ended, but probably none more than Jackson's situation.

The quarterback is one of a handful of NFL players not represented by a traditional sports agent, so contract talks can be tricky. And there doesn’t appear to be a sense of urgency for a new deal as of yet.

“This is an unusual negotiation because I’ve been dealing with the player and I would never divulge a conversation with a player,” DeCosta said. “What can I say is that Lamar and I have had five or six conversations over the last year in regards to his contract. I think at this point we are working at Lamar’s pace. He’s comfortable where we are right now.”

Jackson, selected by the Ravens with the 32nd overall pick in the 2018 draft, has gone 37-12 as the starter in the regular season. He has thrown for 9,967 yards with 84 touchdowns and 31 interceptions over his four-year career.

Jackson was limited to 12 games this season because of an illness and an ankle injury. He completed 246 of 382 passes for 2,882 yards with 16 touchdowns and 13 interceptions. He was also sacked a career-high 38 times.

The Ravens do plan on moving forward with one of Jackson’s favorite targets, wide receiver Marquise Brown. DeCosta confirmed the team will exercise the fifth-year option on Brown’s rookie contract, keeping the former first-round pick in Baltimore through at least 2023.

Brown is coming off the best season of his young career, finishing with 91 catches for 1,008 yards and six touchdowns.

“Marquise was my first pick" as a GM, DeCosta said. “I think very highly of Marquise. I think he is a talent. I love his personality, his competitiveness, his passion.”

The Ravens were decimated with injuries and finished last season 8-9, missing the playoffs for the first time since 2017.

DeCosta is hopeful that several players who missed a substantial amount of time last season, most notably running backs J.K. Dobbins and Gus Edwards, left tackle Ronnie Stanley and cornerback Marcus Peters will be back in the lineup and fully healthy.

However, the injuries have still left a cloud of uncertainty over this offseason.

NOTES: Ravens President Dick Cass, 76, announced he is retiring effective April 1. Longtime sports executive Sashi Brown will step in, overseeing the team's business operations, including finances, budgeting, non-football personnel, corporate sales, operations and communications. Like Cass before him, Brown will not have oversight of player personnel or coaching. Brown has 13 years of NFL experience, including five seasons (2013-17) with the Cleveland Browns, for whom he served two years (2016-17) as executive vice president of football operations.