Ravens throw helmet into the ring as Super Bowl contender 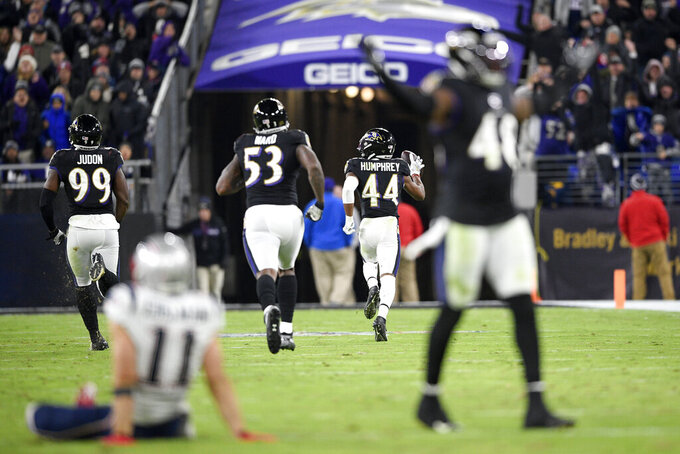 Their 14-point victory in Seattle two weeks ago put them in the discussion, and no further evidence is necessary after Baltimore rang up 37 points and repeatedly harassed Tom Brady in a rout of the previously unbeaten New England Patriots on Sunday night.

Riding a four-game winning streak and holding a two-game lead in the AFC North at the midpoint of the season, Baltimore (6-2) is a team no defense wants to face.

The Patriots were rendered powerless against Ravens quarterback Lamar Jackson, who directed an offense that amassed 210 yards rushing and scored 17 points on its first three possessions. That's no small feat, given that New England had been allowing an average of 7.6 points and 85.3 yards rushing per game.

After Jackson scored the clinching touchdown in a 37-20 victory, a 1-yard run that capped a drive that lasted more than 9 ½ minutes, many of the deliriously delighted fans began chanting "MVP! MVP!"

There's still half a season to play, but at this point, Jackson looks the part.

"Yes, I'm right with the crowd. I mean that," said Ravens safety Earl Thomas, whose interception of Brady served as a precursor for the 68-yard march. "This man is the MVP. I'm right behind him. I'm backing him. When you finish the game like that, it's just a sigh of relief for us on defense."

Jackson ran for two scores, threw for another and accounted for 224 of Baltimore's 372 yards in offense. The defense forced two turnovers, scored on one of them and blanked the Patriots over the final 22 minutes.

"It's a good win," coach John Harbaugh said Monday. He then conceded, "Probably more than a good win."

Jackson picked apart New England's previously impressive defense and Baltimore chased Brady all over the field. So it's apparent that offense and defense are clicking for the Ravens.

Heck, with the exception of an inexplicable 40-25 loss at home against Cleveland, the Ravens have been looking good on both sides of the ball since opening with a 59-10 rout of Miami.

Their performance against New England merely proved it to the rest of the league.

"I feel like our team already knew what we were capable of. We just had to show it, and we did that," Jackson said. "We have to build off that. We just can't get on our high horse and feel like we just won the Super Bowl, because we didn't."

Harbaugh was disappointed with the performance of the special teams against New England.

Cyrus Jones muffed a punt, the kick coverage was ordinary and even the usually reliable Justin Tucker missed an extra point.

"Special teams generally is inconsistent right now," Harbaugh said. "We were really doing a good job early in the year and it's not as good right now. We have to get better there."

Linebacker Patrick Onwuasor returned from an ankle injury and was a force in the middle. He sacked Brady once and stripped the ball from Julian Edelman, a fumble that teammate Marlon Humphrey took for a 70-yard touchdown.

"He stepped up, obviously. Had some huge plays," Harbaugh said. "Probably his best game of the year."

Jones needs to get better returning punts. He's averaging 9.4 yards per return and his fumble cost the Ravens momentum after they had taken a 17-0 lead.

The Ravens are healthier than at any point in the season thus far. No one was seriously hurt Sunday night, and three players sidelined several weeks returned to contribute in positive fashion against the Patriots: Onwuasor, cornerback Jimmy Smith and receiver Marquise Brown.

The Ravens face winless Cincinnati on Sunday. Harbaugh is an NFL coach, so naturally he's insisting this game is going to be a serious challenge for the Ravens. "If you want to make a big win matter, you've got to follow it up with a win," he said. "We understand that records don't mean one thing. We'll have to play our best game of the year."