Ravens try for another prime-time win when they host Bengals 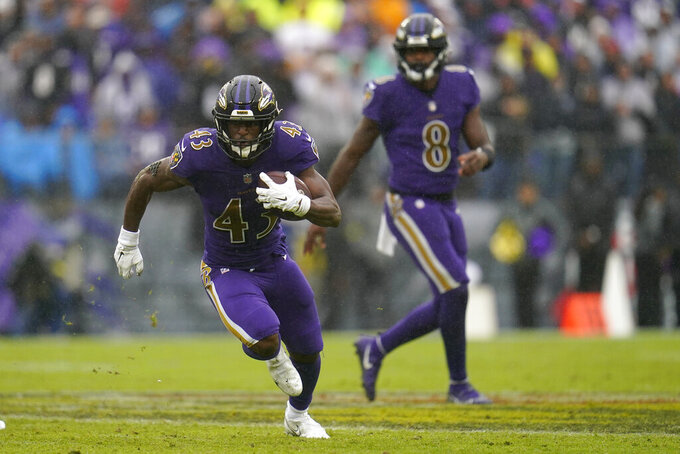 Baltimore Ravens running back Justice Hill (43) carries the ball against the Buffalo Bills in the second half of an NFL football game Sunday, Oct. 2, 2022, in Baltimore. (AP Photo/Julio Cortez)

OPENING LINE: Ravens by 3, according to FanDuel SportsBook.

TURNOVER DIFFERENTIAL: Bengals plus-1, Ravens plus-5.

BENGALS PLAYER TO WATCH: WR Ja'Marr Chase. The Cincinnati star was a major problem for the Ravens last season when he caught eight passes for 201 yards and a touchdown in a blowout win at Baltimore. He had another 125 yards receiving in the rematch at Cincinnati, when the Bengals also won.

RAVENS PLAYER TO WATCH: QB Lamar Jackson. It's the obvious choice, but with the backfield constantly in flux because of injuries, the Ravens need to rely heavily on their star quarterback. He's accounted for 82% of Baltimore's total offense so far this season.

KEY MATCHUP: Bengals QB Joe Burrow vs. the Baltimore secondary. Burrow threw for 941 yards and seven touchdowns against the Ravens last season, and Baltimore's pass defense remains a work in progress. The Ravens were burned by Miami's speedy receivers last month, although they've improved a bit since then.

SERIES NOTES: The Ravens had won five straight games in the series before Cincinnati's sweep last season. ... Of Baltimore's past 15 regular-season losses, 12 were by six points or fewer. Cincinnati was responsible for two of the more lopsided defeats, beating the Ravens by 24 and 20 in 2021. ... Bengals TE Hayden Hurst was a first-round draft pick of the Ravens in 2018 and spent the 2018-19 seasons with Baltimore.

STATS AND STUFF: Cincinnati won two games in the span of five days after losing the first two games of the season. … Hurst had his first TD catch as a Bengal last week. ... The Bengals have scored on 10 of 13 red zone possessions (76.9%). … Burrow has thrown five of his eight touchdown passes in the past two games. In last week’s win over Miami, he was 20 for 31 for a season-high 287 yards and two touchdowns. ... Burrow’s 9.3 yards per completion was also a season high. ... Cincinnati WR Tee Higgins had his best game of the season against the Dolphins, making seven catches for 124 yards, including a 59-yard touchdown. ... The Bengals defense has limited opponents to a 72.2 passer rating. ... LB Logan Wilson leads the Bengals with 26 total tackles. ... DE Trey Hendrickson leads the team with 2½ sacks. ... Cincinnati RB Joe Mixon, after a Pro Bowl season in 2021, is averaging only 2.7 yards per carry as the Bengals have struggled to run the ball. ... Baltimore is 0-2 at home this season, having blown leads of 21 and 17 points in the two games. ... The Ravens are 18-2 at home in prime-time games under John Harbaugh. ... Baltimore S Marcus Williams has three interceptions and a fumble recovery. ... The Ravens are the second team in NFL history to have three teammates with at least 90 sacks — DE Calais Campbell, LB Jason Pierre-Paul and Houston. The 1994 Green Bay Packers had Reggie White, Steve McMichael and Sean Jones.

FANTASY TIP: Look for Baltimore TE Mark Andrews to rebound from a quiet game against the Bills — especially if Bateman is limited.