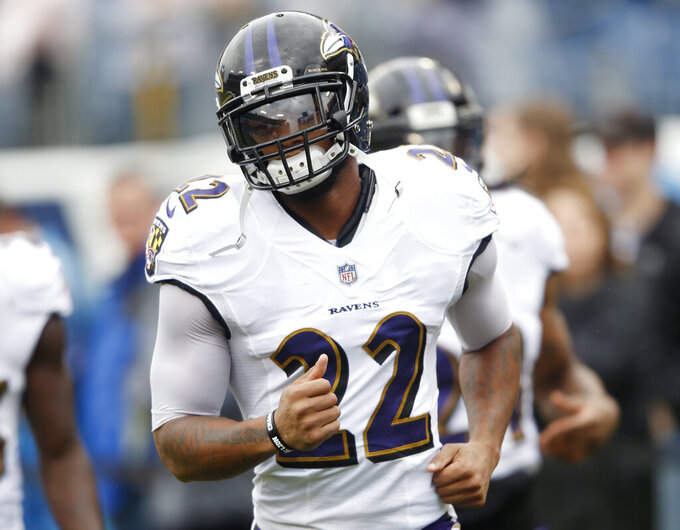 FILE - Baltimore Ravens cornerback Jimmy Smith warms up before an NFL football game against the Tennessee Titans, in Nashville, Tenn., Oct. 14, 2018. For Baltimore defensive back Jimmy Smith, the possibility of retirement is now more than just talk.(AP Photo/Wade Payne, File)

For Baltimore defensive back Jimmy Smith, the possibility of retirement is now more than just talk.

“Anybody who knows me knows that I’ve been retiring since my rookie year. I always say it. It’s just how I talk,” he said Wednesday. “But to actually really think about it, it’s too surreal, to be honest.”

The Ravens' season will likely end this weekend when they host Pittsburgh. Although both teams harbor faint playoff hopes, much of the focus is on the fact that this could be the final game for Steelers quarterback Ben Roethlisberger. Amid all of that, there are some veterans on the Baltimore side who may also be wrapping up their careers — or at least have difficult decisions to make.

The 33-year-old Smith has spent his whole career with the Ravens. Defensive tackle Calais Campbell has been with Baltimore just two seasons, and at age 35, it's not clear what his future holds. Offensive lineman Alejandro Villanueva is 33 and nearing the end of his first season with the Ravens. He'll be facing his former team this weekend.

“Just walking in today, I was talking to Villanueva, and he kind of, I’m not sure where he’s at with it, but you can sense that he kind of cherishes this,” Smith said. “I don’t know if I’m not cherishing it, because I think that in my mind I might play again. But I just don’t know.”

Smith's second season was 2012, when Baltimore won the Super Bowl. He missed several games due to a sports hernia. Coach John Harbaugh recalled how disappointed Smith was, and how the coach tried to help him stay optimistic about his chances to return and contribute.

“I said, ‘Let me just tell you something: Before this season is over, you are going to be the guy that makes the difference in our season and wins us a championship,'" Harbaugh said. “Darned if it wasn’t him on that last series that made the plays that needed to be made to win the Super Bowl in that game. So, every now and then, we’ll kind of talk about that and kind of laugh about it.”

Campbell spent time with Arizona and Jacksonville before joining the Ravens. He said he loves being a Raven, but he hasn't put any thought into whether he'd consider signing elsewhere. He also takes nothing for granted in that regard.

“I’m not even sure I’m going to have somebody that wants me to play football next year. In this business, you’re always looking to get younger and cheaper, and so, I don’t even know if I’m going to be sought after,” Campbell said. "So, at the end of the day, you’ve just got to take it for what it is. And once the circumstances change, once things start kind of coming to fruition, I’ll evaluate the situation, and then we’ll go from there.”

That means this week is a little more meaningful.

“You’ve got to kind of appreciate the possibility of the finality of it, but it’s just so much unknown," he said. “I think I’ve got to go out there and just lay it on the line, leave it all out there and just see how it goes. But I feel pretty good right now, so who knows? I might be willing to do it again.”

As for Smith, he's a little more clear on where he wants to play next season — if he continues playing.

"This is home for me. I’ve been here for this long, it just wouldn’t make sense for me to go play a year for some random team.”