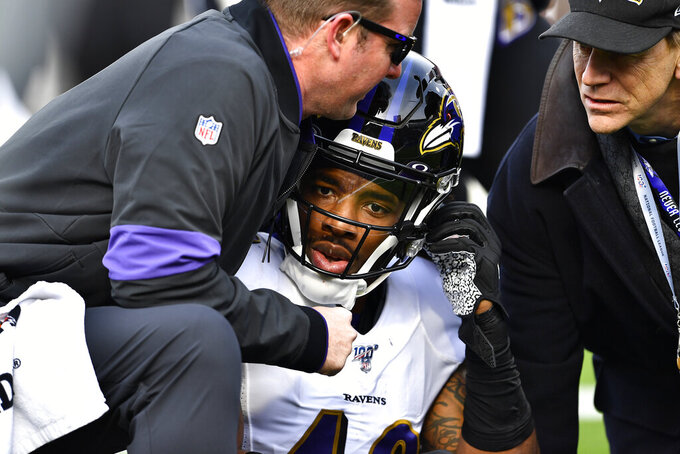 Baltimore Ravens linebacker Chris Board, center, is helped after being injured during the first half of an NFL football game against the Buffalo Bills in Orchard Park, N.Y., Sunday, Dec. 8, 2019. (AP Photo/Adrian Kraus)

BALTIMORE (AP) — The Ravens have defeated several of the best teams in the NFL during their nine-game winning streak, so it would appear as if the New York Jets shouldn't pose much of a challenge Thursday night when Baltimore seeks to clinch its second straight AFC North title.

That's how the oddsmakers see it, anyway. The Ravens (11-2) are a two-touchdown favorite because, after all, they own the best record in the AFC and the Jets (5-8) haven't beat a team that currently owns a winning record.

Yet, Baltimore coach John Harbaugh isn't quite ready to distribute shirts and caps that read “2019 AFC NORTH CHAMPIONS.” As far as he's concerned, New York is every bit as dangerous as New England, Seattle, San Francisco and Buffalo — teams the Ravens defeated during their team-record nine-game run.

“They’re playing great. They won four of the last five, that’s the bottom line," Harbaugh said of the Jets. “That’s what we talked to the guys about. That’s all you need to know. Watch the tape. They’re playing winning football. We understand that. We know this league. Our guys don’t take anybody for granted. You never can, you never should."

The Ravens come in with the most prolific running attack in the NFL. Led by Lamar Jackson, who's only 23 yards short of setting the single-season record for yards rushing by a quarterback (1,039 by Michael Vick in 2006), Baltimore is grounding out an average of 200.9 yards per game.

The Jets are allowing only 75.6 yards rushing per outing, which might make things interesting.

“All helmets to the ball," Jackson said. “It's going to be a physical game."

Jackson is nursing a sore quadriceps, but New York's defense will nevertheless be pressed to keep up with the league's highest-scoring team.

New York dropped from No. 1 to No. 2 in rushing defense after giving up 122 yards to Miami last Sunday, but the Jets have allowed a league-low 3.03 yards per carry. Their 98 tackles for no gain or negative yards — excluding kneeldowns — lead the NFL, according to Radar360.

The Jets have allowed only one individual 100-yard rusher all season: Dallas' Ezekiel Elliott in Week 6. But they'll have a tough task against Jackson, who's topped the 100-yard mark four times.

“He can make you miss in a phone booth," Gase said.

Former Ravens linebacker C.J. Mosley probably had this game circled on his calendar during training camp. Mosley signed with the Jets as a free agent in March after spending five seasons with Baltimore, earning four Pro Bowl bids in the process.

Mosley won't be participating on Thursday night because he's on injured reserve with a groin injury. The 2014 first-round draft pick will not be missed by his former teammates.

“He’s not playing, and that’s good for us," cornerback Jimmy Smith said. “He was a good player -– a great player -– for us, but stay on the sideline.”

Jets quarterback Sam Darnold and wide receiver Robby Anderson are establishing a solid connection late in the season for a second straight year.

Anderson has 18 catches for 303 yards and two touchdowns in his past three games. That includes a seven-reception performance against Miami, during which he had 116 yards and a score.

Anderson finished last season with a flourish, too. He had 23 catches for 336 yards and three touchdowns in his last four games.

“Robby's always been a really good asset for us on offense," Darnold said. “He's obviously super, super fast and sometimes teams struggle to guard him. He affects the game even when he's not having as many yards as he has been the last few weeks."

Ravens left tackle Ronnie Stanley was listed as doubtful on Wednesday because of a concussion and could miss his first game of the season. James Hurst will take his place.

Baltimore will also be without special teams standout Chris Board (concussion), and leading receiver Mark Andrews (knee) is questionable.

The Jets have used five different starting combinations at cornerback and safety this season because of injuries and ineffectiveness by some players.

Adams sat out for the first time in his three-year NFL career last week, forcing the Jets to place cornerback Darryl Roberts at safety along with Marcus Maye.

Roberts might be needed at cornerback against Baltimore because of Kyron Brown — last Sunday's starter — is out for the year with a quadriceps injury and Maulet could be sidelined for a second straight game.

“The way we prepare throughout the week, we do a good job of cross-training at different spots," said Maye, the only member of the secondary to start every game. “We come prepared."