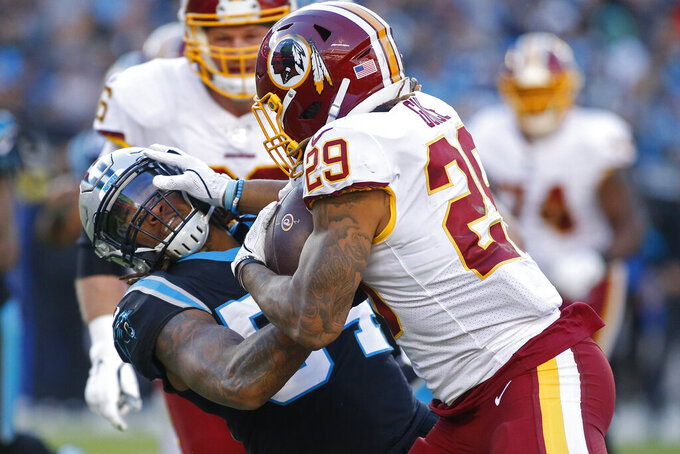 WASHINGTON (AP) — The bad news for the Washington Redskins is their loss at Green Bay eliminated them from playoff contention in a bad NFC East.

The worse news is they won't have running back Derrius Guice for at least their next game Sunday against the Philadelphia Eagles. Pending the results of an MRI, it could be longer.

Interim coach Bill Callahan on Monday ruled out Guice with a left knee injury. It's the same knee Guice tore the ACL in during a preseason game in August 2018.

“Most guys would be in the tank, (but) he comes through in a positive way with a positive outlook looking to the next challenge of what he needs to do to get back healthy again,” Callahan said. “It’s still frustrating for him, but if there’s anybody who can take on a challenge it’s certainly Derrius.”

Guice's injury is a blow for the Redskins (3-10) mostly because they're in evaluation mode looking toward next season. He's an important part of the offense moving forward, along with rookie quarterback Dwayne Haskins and rookie receiver Terry McLaurin.

“I think it’s going to be awesome," Callahan said.

Even without Guice, the Redskins can lean heavily on veteran running back Adrian Peterson, who rushed for 76 yards and a touchdown on 20 carries against the Packers.

Peterson — who was benched in Week 1 by since-fired coach Jay Gruden — handled the rotation with Guice well but certainly won't shy away from a bigger workload. Callahan loves Peterson and wants to run the ball a lot, and it's not crazy to think Peterson is back next year at age 35 given Guice's injury problems.

The Redskins' overall mentality since Callahan took over for Gruden has been about winning the next game. Losses by the Eagles and Dallas Cowboys actually kept Washington in the hunt for a while, but the dream of winning the NFC East at 7-9 is now over.

Even if Callahan isn't back next season, it's his job to set the team up best for the future. Some steps have already been taken, such as sitting cornerback Josh Norman — who's unlikely to return — but it should now be a full youth movement.

Haskins gutted through an ankle injury against the Packers, saying he was not going to come out of the game. There have been plenty of (warranted) criticisms of the 15th overall pick and how long it has taken him to learn the offense, but no one can take shots at his toughness.

“This is a tough guy," Callahan said. "He’s a competitor. Quarterbacks are competitors, tough, tough people, and I’ve got a lot of respect for Dwayne and what he went through."

Despite a defensive line featuring first-round picks Jonathan Allen and Daron Payne, Green Bay dominated Washington on the ground to the tune of 174 yards on 28 carries. The Packers rushed for 6.2 yards a carry, which is another bad sign for a unit that was supposed to be the team's strength.

In addition to Guice, linebacker Ryan Kerrigan will miss the Eagles game with a calf injury. After starting 139 consecutive games, Kerrigan will be out for the second time in three weeks.

Haskins was sacked four times in the loss to the Packers. It's hard to judge Haskins properly if he doesn't have time to go through his reads and find receivers.

The next move is probably shutting down Guice for the rest of the season to make sure he doesn't get injured again. But Callahan wouldn't commit to that yet.