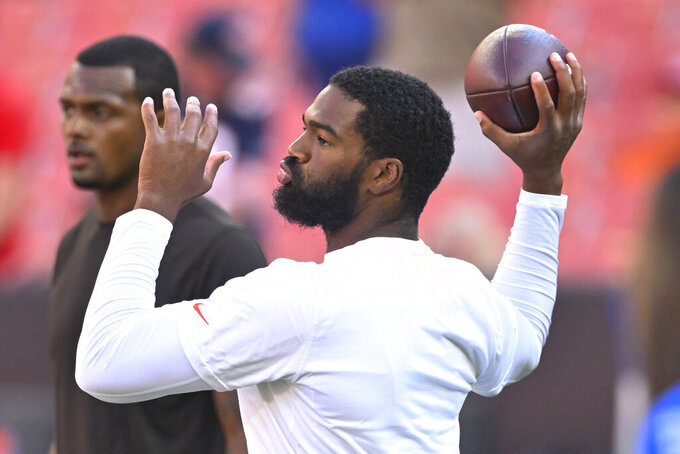 BEREA, Ohio (AP) — Jacoby Brissett had other options, better choices. There were definitely more stable ones for a well-respected veteran quarterback.

But Cleveland, with its penchant for chaos and controversy, didn't scare Brissett. Just the opposite.

The disorder around the Browns intrigued Brissett and actually made them more appealing. So much so that he signed a 1-year contract as a free agent in March despite no promise of playing time this season.

“Cleveland was always in the media like for whatever,” Brissett said during a candid conversation inside the team's facility following practice last week. "And I was like, ‘I’ll go there.’ So, yeah, I put myself here. I could have gone somewhere else and been OK with being whatever.

He got his wish. Things have a funny way of working out for Brissett.

The 29-year-old, who made unexpected leaps up the depth chart and started at previous stops in New England, Indianapolis and Miami while battling self-doubt and depression, begins the 2022 season as Cleveland's No. 1 quarterback — No. 1 with an asterisk.

Brissett's being counted on to keep the Browns in the AFC hunt while Deshaun Watson serves his 11-game NFL suspension for alleged sexual misconduct. Watson isn't eligible to play until Dec. 4 — and only then if he meets requirements agreed to in a settlement with the league — and when he get back, Brissett will step aside.

That might be hard to do if the Browns are in playoff contention and if he's a big reason for their success. However, Brissett, who is 14-23 as a starter, isn't delusional about his supporting role.

Once Watson returns, it's his team.

Since arriving, Brissett has been a steadying presence for a team that spent the summer enveloped by the Watson saga. Imparting wisdom from past experiences, he's become a leader, which was one of the qualities that attracted the Browns to him.

Before Brissett signed, Cleveland did its homework, knowing there was a good chance he would be thrust into a unique situation. The Browns heard only positives.

“The coaches I talked to about Jacoby first of all raved about him and raved about the person,” coach Kevin Stefanski said. "Then when you start to dive into the things that he has been through and the situations he has been in and around, it goes to show you this is a player who has seen a lot in his young life and young career and I think has shaped him into a really resilient person and a really, really solid leader for this football team.”

Brissett's younger teammates view him as something of a quirky older brother who makes them laugh. He doesn't know why.

“I never really make jokes,” said Brissett. "I really just think because I’m older than them and I just say stuff and I’m actually serious and they think I’m joking that they think it’s maybe funny.”

He comes across as outgoing and charming, the epitome of a people person. But Brissett said there have been times, even some since joining the Browns, when it's been a challenge for him to be engaging or connected.

Looks can be deceiving. He's not always been as he seems.

“I always joke with people that I hate people, but I love people," he said. "I’ve had a lot of bad days, dark days and a lot of, ‘(Expletive), I wish I had me someone to lean on and had somebody to talk to.’

"I got that now. But I had a lot of days where I just kept stuff to myself and I now know just how bad that was for me and the person that it turned me into.”

Fearing he was letting people down or not living up to their expectations, Brissett beat himself up. It took him some time to figure out why he was putting others' feelings ahead of his own. The smallest things triggered negativity and anxiety.

He began talking to a therapist while he was with the Colts, and Brissett credits those continued sessions as well as reading up on mental health and following the journey of Cavaliers All-Star Kevin Love in helping him cope.

He remains a work in progress.

“I can only do the best that I can,” he said. "In my life, that’s been enough for me. In some of my dark days, I’ve been like, ‘Damn, I need to do this for this person.’ I need to please somebody else and it never made me comfortable playing.

“It never made me comfortable in anything, to the point where and I’ll never forget this. I was talking to my therapist as I’m crying and she asked me, ‘Why do you think that along the lines of people pleasing?’ And she was just like, ‘Jacoby, you are enough.’ And just hearing someone say that, damn, maybe she's right. I am enough.”

Brissett's certain he picked the right place, and even more confident the Browns chose the right quarterback.