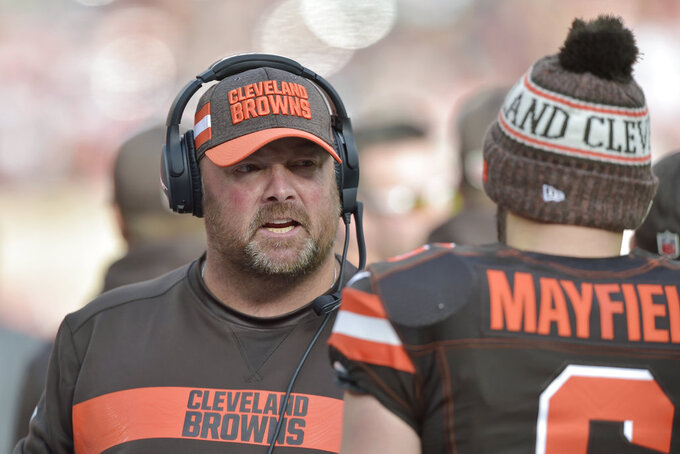 FILE - In this Nov. 4, 2018, file photo, Cleveland Browns offensive coordinator Freddie Kitchens talks to quarterback Baker Mayfield during an NFL football game against the Kansas City Chiefs, in Cleveland. A person familiar with the decision says the Cleveland Browns are hiring Freddie Kitchens as their coach. Kitchens, who had a dazzling eight-week run as the team’s interim offensive coordinator, is finalizing his contract and will be named Cleveland’s ninth coach since 1999, said the person who spoke Wednesday, Jan. 9, 2019, to the Associated Press on condition of anonymity because the team is not commenting on the imminent hire. (AP Photo/David Richard, File)

CLEVELAND (AP) — Freddie Kitchens had something on his coaching resume no other candidate could match. He made Baker Mayfield a better quarterback.

Kitchens, who helped Mayfield turn his rookie season into a record-breaking one during an impressive eight-game stint as the Browns offensive coordinator, was named Cleveland's 17th full-time coach on Saturday, capping a remarkable personal rise up the coaching ranks.

His next goal: Take the Browns where they've never been — the Super Bowl.

"It's an honor to be named the head coach of the Cleveland Browns," Kitchens said in a release. "As I've said before, I think Cleveland and I get along pretty well. My family and I have really enjoyed our time with this organization and in this community over the last year.

"There are a lot of great people in this front office that I'm excited to continue to work alongside with a singular focus on winning. I've been to one Super Bowl that didn't end the way I wanted it to and that disappointing memory is what really drives me. Our goal is to work extremely hard to earn the right to raise that Lombardi Trophy for our fans and this city."

The affable 44-year-old Kitchens is the ninth coach since the Browns' 1999 expansion rebirth and fourth hired since 2012 by owners. As it turns out, general manager John Dorsey didn't have to search far or wide for "a man of character, a guy who can instill leadership into these young men."

Kitchens was there the whole time.

"We had a deliberate and thorough process and one thing became evident — that Freddie is the best person to lead the Cleveland Browns," said Dorsey, who has lifted the Browns from laughable to legitimate in just one year. "We saw firsthand what Freddie is able to do. He showed that he is consistent on a day in and day out basis and that he is a true leader.

Kitchens will be formally introduced Monday at a news conference in FirstEnergy Stadium.

It's hard to imagine Kitchens was part of Dorsey's long-term vision when he was hired to coach running backs on Hue Jackson's staff after 11 seasons as an Arizona assistant. But when Jackson and coordinator Todd Haley were fired on Oct. 29, Kitchens took the offensive reins and Mayfield and his teammates took off.

Under Kitchens' leadership, the No. 1 overall pick in last year's draft threw 19 of his NFL rookie record 27 touchdown passes. Mayfield erased any doubts he's the coveted franchise quarterback that has eluded the Browns for decades.

Kitchens and Mayfield connected on a personal level, two former college quarterbacks who bonded over a shared passion and senses of humor. They grew tight and the Browns are counting on that relationship to flourish.

"It was great working with and learning from Freddie last year," Mayfield said after Kitchens' hiring was announced. "He has such a creative mind. He creates mismatches and just put guys in position to take advantage of their opportunities. He puts trusts in us as players. He's the same guy every day."

Mayfield was a different player under Kitchens, who figured out creative ways to protect the 23-year-old. The Browns improved across the board statistically — they averaged 6.8 yards per play — and became one of the league's must-watch teams over the last two months as Kitchens unveiled unique formations and trick plays.

Kitchens was praised by players for seeking their input on which plays they were most comfortable running. He also got major production from rookie running back Nick Chubb, left tackle Greg Robinson and receiver Breshad Perriman — all under-utilized by Jackson and Haley.

But it was Mayfield's growth that mattered most. In six games before the coaching change, Mayfield completed 58 percent of his passes for 1,471 yards with eight touchdowns, six interceptions and 20 sacks. In eight games under Kitchens, he completed 68 percent with 19 TDs, eight interceptions and five sacks.

As the team's success grew, Kitchens went from an unknown to Cleveland fan favorite.

The barrel-chested Alabamian wore an orange "Dawg Pound" hooded sweat shirt on game day because his daughters liked it and it was his nod to the Browns' famed bleacher section that he admired from afar in the 1980s.