Reality check: Jags look like many expected in lopsided loss 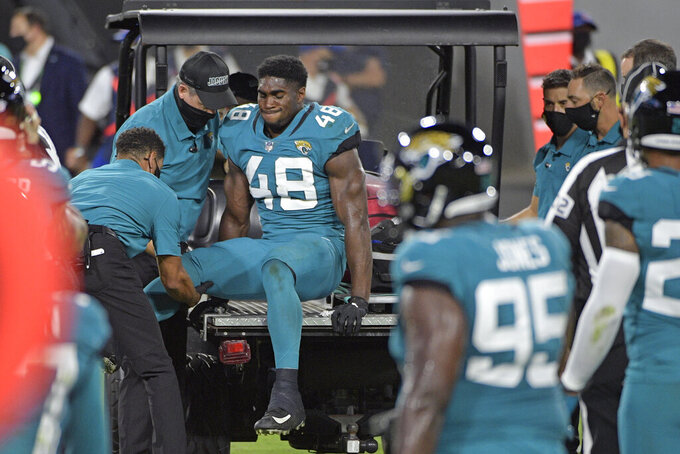 Teammates watch as Jacksonville Jaguars outside linebacker Leon Jacobs (48) is taken off the field after he was injured during the first half of an NFL football game against the Miami Dolphins, Thursday, Sept. 24, 2020, in Jacksonville, Fla. (AP Photo/Phelan M. Ebenhack)

JACKSONVILLE, Fla. (AP) — This is what the Jacksonville Jaguars were expected to look like in 2020.

The Jaguars did little right in a 31-13 home loss to Miami on Thursday night. They dug themselves another early hole, were downright dysfunctional in all three phases — especially on defense — made mistakes aplenty, and were out of it long before the fourth quarter began.

They might not be tanking, but they surely have some folks once again thinking about their chances of landing the overall No. 1 draft pick next April. That was the general consensus heading into the season, and it seems renewed after Jacksonville flopped in prime time.

Quarterback Gardner Minshew was shaky in the pocket and careless with the football. Chris Conley dropped two passes that would have resulted in first downs and was flagged for offensive pass interference. Rookie cornerback CJ Henderson seemed to think he was still in college, forgetting to tag a receiver down after a catch. And Jacksonville’s pass rush was so inept that 37-year-old quarterback Ryan Fitzpatrick looked half his age while making plays passing, running and even receiving.

The result was an embarrassing rout in front of 16,563 socially distanced fans. It was Jacksonville's third lopsided loss in its last five games at TIAA Bank Field, each of them by at least 17 points.

This one showed just how thin the team's margin for error is this season. The Jaguars played a nearly perfect opener and still had to rally to beat Indianapolis 27-20. They’ve made countless errors the last two weeks and ended up on what’s become an all-too-familiar side of the scoreboard for the small-market franchise.

“It is always harder when you don’t feel like you played well on either side of the ball, or all three sides of the ball,” linebacker Joe Schobert said. “It is just something we need to look at. It is a long weekend now to just reflect on how we played and how we need to change and get better, and we have to be able to turn it into a positive going forward.”

Rookie running back James Robinson continued his impressive NFL start. The former Illinois State standout who went undrafted totaled 129 yards from scrimmage and scored for the second straight week. He ran for 46 yards and two touchdowns against the Dolphins and caught six passes for 83 yards.

He has 339 total yards and three scores in three games.

Everything else? It starts with generating more pressure on opposing quarterbacks. “Sacksonville” is more like “Sacklessville," with three sacks in as many games and one of those coming against a backup QB.

Getting off to a better start would help, too. The Jaguars have allowed a touchdown on each game’s opening drive — a trend that has coach Doug Marrone ready to reverse his strategy heading into the coin toss.

Linebacker Myles Jack appears more comfortable back at his original position. Jack, who struggled in the middle of the defense last year, had 11 tackles for the third consecutive week while playing outside linebacker.

The move freed him to play more freely in the box, allowing him to read and react instead of spending time making sure everyone else is in the right position.

Minshew was clearly confused by Miami’s soft zone coverage. He completed just 2 of 9 passes that traveled at least 10 yards, and the only deep shot he took was completely the wrong read and into triple coverage.

He has three turnovers in his last five quarters and has been sacked 10 times in three games.

Linebacker Leon Jacobs will miss the remainder of the season after tearing a ligament in his right knee against Miami. Safety Andrew Wingard has a strained groin, positive news considering the team initially feared he had a core muscle injury.

80 — percentage of passes Philip Rivers, Ryan Tannehill and Fitzpatrick have completed against Jacksonville this season.

Getting receiver DJ Chark (chest/back) healthy would be a huge help for Minshew before the Jags play at Cincinnati on Oct. 4, beginning a stretch in which they play three of four on the road.