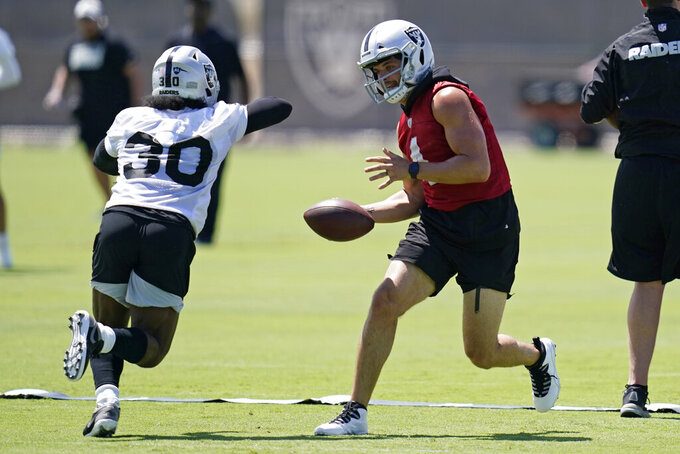 HENDERSON, Nev. (AP) — John Brown believes he's the answer to fill the wide receiver void of the Las Vegas Raiders after Nelson Algholor bolted for New England during the offseason via free agency.

“The offense is set up nicely and I just wanted to be a part of it,” Brown said Wednesday after voluntary offseason training activities. “I know this is a team that is up and coming and they’re building, so I felt like I can help out.”

Brown’s tale of the tape reveals 320 receptions for 4,478 yards and 31 touchdowns after spending four seasons with the Arizona Cardinals, one campaign with the Baltimore Ravens, and the last two with the Buffalo Bills.

Brown, who has two 1,000-yards seasons to his credit, says he’s ready to be Carr’s go-to wideout, knowing he can run any route in the playbook.

“With Derek, it’s always great going in with a new quarterback, trying to figure guys out,” Brown said. ” I feel like I can help out in the role and teach the guys how to become a veteran because we have a great group and these guys, they play well. And I think they’ll do even better this year.

“We’re trying to figure each other out. And I can bring a veteran standpoint, be able to help out.”

Both Brown and fellow veteran free agent signee Willie Snead IV will be asked to join Hunter Renfrow as mentors.

“I’ve been lucky since I’ve been here, for the most part, had a really good receiver room, especially when the year rolled around,” Renfrow said. “But Willie and John have been two veteran guys with the departure of Nelly. Obviously, they’ve brought in some veteran presence, they’ve been on successful teams, they’ve been really good players for a long time.”

Second-year receivers Henry Ruggs III and Bryan Edwards combined for 37 receptions and 645 yards receiving during their rookie campaign, but Brown said both are poised for breakout seasons, just from what he’s seen of them on film and during voluntary workouts.

”(Ruggs’) speed alone, he can definitely dominate the game, he can really take over the offense,” Brown said. “With Bryan Edwards, he’s physical and he’s really aggressive. So, with him bringing that energy right there, a lot of guys can feed off of that.”

And Brown knows what an explosive receiver can do for a team, after playoff appearances the past three years, including last season’s Buffalo squad that ranked third in the league with 4,620 yards passing and was tied with Kansas City and Seattle for third with 40 touchdowns through the air.

Brown said he definitely sees the Raiders’ potential as a playoff team this season.

“First, it starts off with respecting each other and we do that real well,” said Brown, who has a combined 15 receptions for 208 yards and three TDs in eight career games against AFC West foes Denver, Kansas City, and the Chargers. “And with the communication on the field, we do a great job with that and these guys. They want it real bad. So, I feel like we’re in a great spot.”