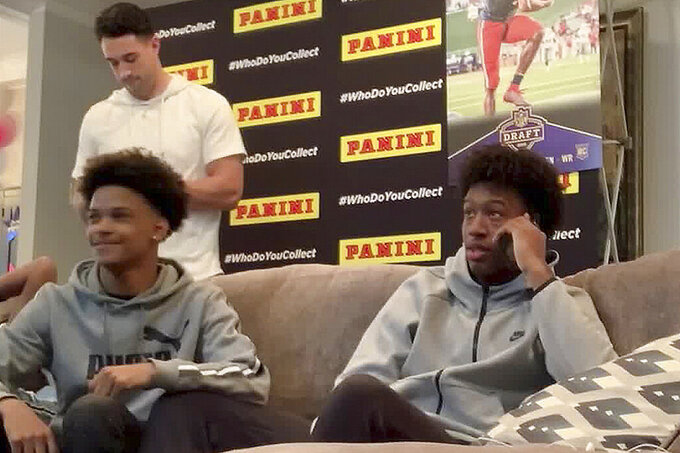 In this still image from video provided by the NFL, Antonio Gandy-Golden is selected by the Washington Redskins in the fourth round in the NFL football draft Saturday, April 25, 2020. (NFL via AP)

WASHINGTON (AP) — Taking Chase Young was a no-brainer several months in the making. Trading Trent Williams was more of an ordeal that took even longer.

The Washington Redskins got each of those things accomplished during the NFL draft, adding a potential cornerstone player and parting ways with a longtime pillar of the organization. Less than 48 hours after taking the Ohio State pass-rusher second overall, on Saturday they traded their seven-time Pro Bowl starting left tackle to the San Francisco 49ers for two picks and selected his likely successor.

Drafting Young, LSU offensive tackle Saahdiq Charles and six other players and trading Williams made this the most important stretch of new coach Ron Rivera's tenure so far. Nothing was as important as landing Young, who has long been considered the best player in the draft.

“When you draft a guy like that, that’s what you’re trying to do: You’re trying to impact the team,” Rivera said. “I believe we’ve taken the guy that will impact not just his position group, not just the linebackers, not just the (defensive backs), but I think the entire football team.”

Young and a former Ohio State teammate, quarterback Dwayne Haskins, could become franchise cornerstones. Both have local roots, having played at private high schools in the Washington suburbs.

Getting a fifth-round pick in this draft and a third-rounder in 2021 for Williams also ended a lengthy saga that included him missing all last season.

The Williams trade went hand in hand with the selection of Charles 108th overall, the second pick in the fourth round. He said the series of events shows what the Redskins “might have in mind” for him.

Charles likely would've been a higher pick if not for a six-game suspension for a positive drug test. He said he learned from his “dumb, boneheaded type of mistakes" and was honest with team officials who asked about the situation.

“They believe in me," Charles said. "They gave me a chance. And for that, I feel like I’m going to give the Redskins organization everything I got.”

Washington became the first team since the AFL-NFL merger to pick a defensive lineman in the first round of the draft in four consecutive years. Young and 2019 selection Montez Sweat are the pass-rushers, while 2017 and 2018 picks Jonathan Allen and Daron Payne out of Alabama are the muscle for a D-line that could be among the best in the league.

“I feel like we’re definitely going to have a great group on the defensive line full of first-rounders," Young said. “I know those guys are already prepared to get after it.”

This draft wasn't as much about filling immediate needs as stocking up on talent. Rivera made no secret that he likes players who can move around, and his first draft with Washington fit that bill.

Third-rounder Antonio Gibson can be a receiver, running back and returner who could be like Christian McCaffrey, fifth-rounder Keith Ismael can play center and each guard position and fifth-rounder Khaleke Hudson is a hybrid safety/linebacker in the vein of longtime Rivera standout Thomas Davis.

“I’m comfortable making plays — I feel like that’s what I do,” said Hudson, who was the 162nd pick out of Michigan. “I feel like sometimes you get caught up in what a guy who doesn’t have a true position. Sometimes that really doesn’t matter because once he’s on the field he’s a playmaker and that’s how I see myself. I’m just a playmaker every time I’m out there, and I’m going to do whatever I can, put the team on my back if I’ve got to.”

A year after getting a third-round steal in Terry McLaurin, Washington took fellow wide receiver Antonio Gandy-Golden out of Liberty with its second fourth-round pick. His 64 catches of 15-plus yards the past two seasons were the most of all draft-eligible receivers, and an emphasis on ball security helped Gandy-Golden significantly reduce his number of drops.