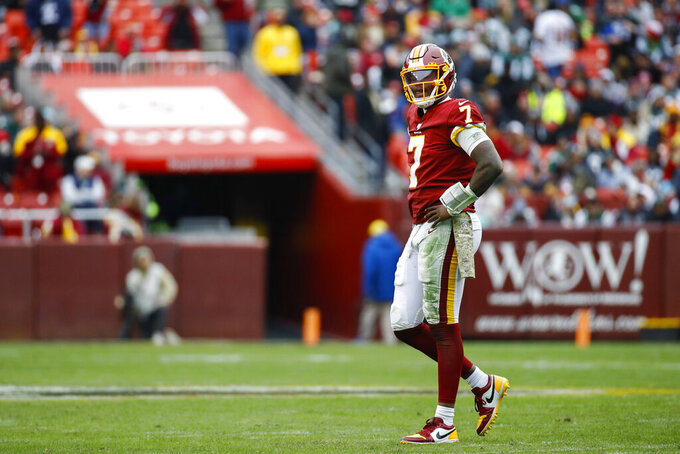 Washington Redskins quarterback Dwayne Haskins (7) walks off the field during the second half of an NFL football game against the New York Jets, Sunday, Nov. 17, 2019, in Landover, Md. (AP Photo/Patrick Semansky)

Haskins was sacked six times and threw an interception before scoring two garbage-time touchdowns in Washington’s 34-17 loss to the New York Jets on Sunday. A 45-yard screen pass to running back Derrius Guice early in the fourth snapped Washington’s franchise-worst streak of 16 consecutive quarters without a touchdown, but that and a later TD pass to tight end Jeremy Sprinkle did little more than pad Haskins’ stats.

“It took him a little time to get comfortable,” interim coach Bill Callahan said. “I thought the passing game, we opened it up a little more today to make it player-friendly for him. ... I didn’t think it was anything that was elaborate or anything that was too much or would congest his mind with a lot of thinking. I really thought the reads were simple, but you’ve got to execute them.”

Easier said than done for a QB with raw talent, but a lot to learn.

One-time Redskins coach Gregg Williams dialed up some different looks against Haskins, who looked flustered in the pocket and couldn’t develop much of a rhythm until the outcome was already decided.

“We showed him a lot of different looks and showed one thing that looks similar to one play that we previously ran when we might've blitzed this guy and switched it up to where that guy's actually dropping, but it's in the same look so he didn't know possibly what was coming,” said linebacker Neville Hewitt, who picked off Haskins early in the fourth.

Sixteen quarters without a touchdown were the most by a team since the 2000 Baltimore Ravens and broke a tie with the 1936 Boston Redskins for the most in franchise history. Despite that, Haskins said he felt more comfortable in his second NFL start.

He now has two touchdowns and five interceptions in four pro games and is still trying to get a grip on being a leader at this level.

“It’s tough,” Haskins said. “You’ve got guys who have been in the league for a long time and as a young dude with a new voice, you have to earn that trust and earn that ability to ask for what you see out there.”

After Sam Darnold threw a career-high four touchdown passes and showed the kind of progress the Redskins hope they’ll see out of Haskins as time goes on, the 2018 third overall pick had some advice as someone who’s been there and done this.

“I just told him after the game to keep his head up,” Darnold said. “No matter what people say, the doubters, people who are going to say anything bad, I said: 'Just block it out, man. Just continue to go to work, and if you go to work every single day, you'll be all right.’”