Redskins face defensive, injury questions with Bears up next 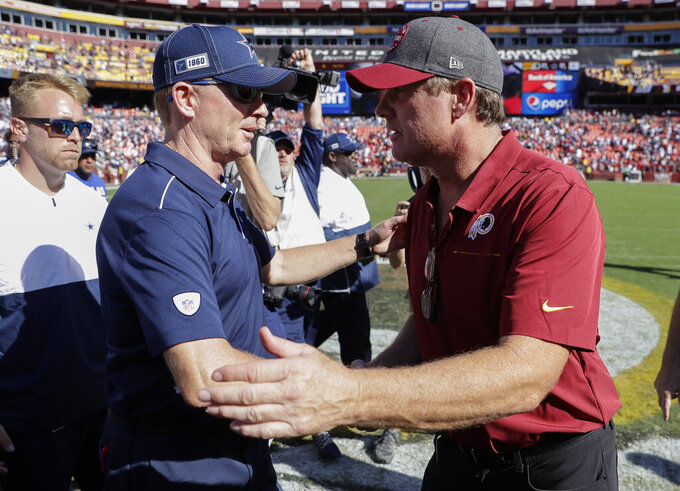 It's getting late awfully early in the season for the Washington Redskins.

They're 0-2 after losses to the teams forecast to finish first and second in the NFC East, Case Keenum is holding his own at quarterback, and yet there are already questions about making changes to the coaching staff.

"I don't think we need to hit the panic button yet," coach Jay Gruden said. "We just have to continue to focus on what we can do better to win."

Sunday's loss to the Dallas Cowboys shined a not-so-happy spotlight on the defense that was supposed to be Washington's strongest unit. Instead, there are more than a few questions about that side of the ball and a handful of injuries as the Redskins prepare to host the Chicago Bears next Monday night.

The passing game has been much better than expected thanks in large part to Keenum and rookie receiver Terry McLaurin. Keenum has thrown for 601 yards and five touchdown passes with no interceptions through two games.

Falling behind in the second half and needing to abandon the running game hasn't helped, and there's more that can be done to open up the field.

"We'll keep getting better at the long ball, but everybody is different," Keenum said. "I overthrew Terry on the deep ball but found somse other guys. That's what the NFL season is about. It's about progressing and finding what you do well to be better at it."

How much time do you have?

The defense is struggling to contain receivers, stop the run, rush the passer or do anything that's an important ingredient to winning in the NFL.

Knee injuries to top defensive lineman Jonathan Allen and No. 2 cornerback Quinton Dunbar have tested Washington's depth. But newcomer Jon Bostic doesn't want this defense using injuries as an excuse — and he's right because a big problem again seems to be the scheme.

So far, they haven't been.

Undrafted free agent Steven Sims made the team, and it was primarily for what he could do as a kick returner. Gruden creatively got Sims involved in the offense Sunday with three jet sweeps that added up for 16 yards and were the perfect showcase for his speed.

"It's unbelievable what those guys can do upstairs and some of the looks that they're able to produce and getting guys open, different formations, and just getting guys out in different spaces," Keenum said. "We just got to keep attacking and hitting our shots when they come."

Most of the conversation on the Redskins' offensive line has been about missing left tackle Trent Williams, who has been a no-show in a dispute with the team. But right tackle Morgan Moses, who may not be 100 percent, struggled against the Cowboys, and along with right guard Brandon Scherff has been a source of some costly penalties

"We talk about their movement all the time," Gruden said. "Until you have to go block their movement, their stunts, and you have to react and stick your foot in the ground and react and then bounce off the stunt and try to get the other guy, it's easier said than done sometimes. .... A couple holding calls here and there may be understandable, but we've had way too many the first two weeks."

Tight end Jordan Reed has missed three weeks with a concussion and, incredibly, isn't the most worrisome injury. Allen is a key cog for the defense, and the secondary being without Dunbar and fellow cornerback Fabian Moreau has hurt a ton.

The Redskins have given up a total of 569 yards in the second half through the first two weeks of the season. It's not a good reflection of defensive adjustments but more specifically shows how this unit is getting worn down.

Hope an extra day is enough to get Allen, Dunbar and Reed back and make more than a few tweaks defensively to be ready for the Bears. Most specifically, getting pressure on Mitchell Trubisky is a must to take pressure off the defensive backs.