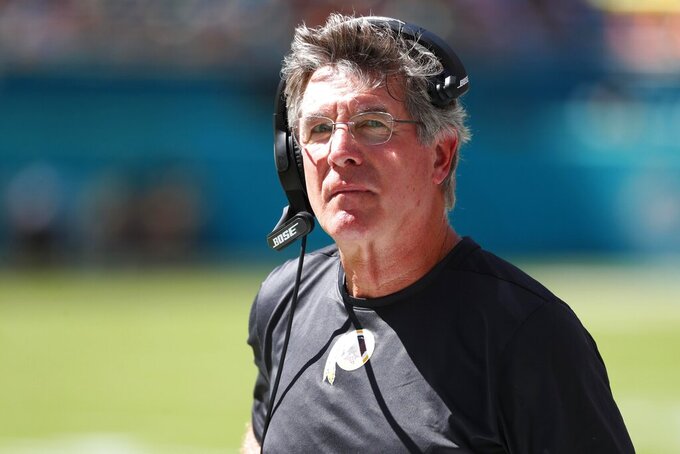 ASHBURN, Va. (AP) — There was a different feel at the Washington Redskins' practice facility the day after their first victory of the season.

It didn't matter that Washington held on to beat the winless Miami Dolphins who missed a 2-point conversation attempt in the final seconds. After Jay Gruden was fired and Bill Callahan installed as interim coach, the Redskins needed a win any way they could get it.

"I imagine it's going to be a little happier around here this week," linebacker Ryan Kerrigan said Monday. "Obviously it's been a rough go of it so far this year, but to get one under our belt, get the first one behind us, I think is really big."

The good vibrations may not last long with former offensive coordinator Kyle Shanahan's 5-0 San Francisco 49ers coming to town Sunday. But for now, there are happy days.

Callahan's promise to commit to the running game worked. Adrian Peterson carried the ball 23 times for 118 yards, and Washington rushed for 145 yards against Miami.

"We came into the game thinking rush attempts," Callahan said. "We weren't really concerned about the yardage. The yardage worked out, but the attempts was really, really important."

The stalwart defensive line that was supposed to be the Redskins' top unit also made an impact with four of their five sacks.

"We're just trying to do our job and do it at a high level," said defensive lineman Jonathan Allen, who had two sacks.

Second-half defense continues to be an issue after giving up 13 points in the fourth quarter to the Dolphins, who hadn't scored after halftime this season until that game. Callahan had players do sprints after practice during his first week in charge in an effort to improve their conditioning for just such an occasion, but more work needs to be done.

Terry McLaurin is already the biggest bright spot of a lost season. The third-round pick out of Ohio State had four catches for 100 yards and the two touchdowns. Through five games, McLaurin has 23 catches for 408 yards and five touchdowns.

"It's impressive the type of poise he has," Callahan said.

Case Keenum is who we thought he was. The veteran quarterback was 13 of 25 for 166 yards and two touchdown passes to McLaurin.

Callahan said Keenum will get the nod against the 49ers, further delaying first-round pick Dwayne Haskins from making his first NFL start. Keenum said he was "two-faced" in the Dolphins game and will need to be much better for the Redskins to have any shot against San Francisco.

"I've got to be better for this football team moving forward," Keenum said. "I've got to get the ball to (receivers) in key situations and not make it as interesting as it was."

The Redskins are depleted at tight end without Jordan Reed and Vernon Davis because of concussions, and Jerome Cunningham injured his right leg at Miami. A team that likes using two tight end sets is down to Jeremy Sprinkle and little-known Hale Hentges as healthy options.

Washington called 33 rushing plays in Callahan's debut, 12 more than the highest during Gruden's five games as coach this season.

Along with the continued development of Haskins with an eye toward his first start, the Redskins need to figure out how to sustain longer drives and keep the defense off the field as much as possible.