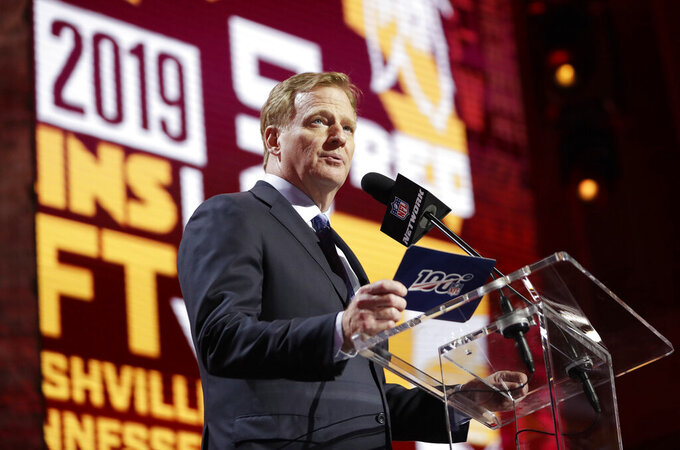 NFL Commissioner Roger Goodell announces that Mississippi State defensive end Montez Sweat has been selected by the Washington Redskins in the first round at the NFL football draft, Thursday, April 25, 2019, in Nashville, Tenn. (AP Photo/Mark Humphrey)

WASHINGTON (AP) — Dwayne Haskins learned patience from waiting behind J.T. Barrett at Ohio State that he could need to lean on before he becomes the Redskins' franchise quarterback.

Selecting Haskins 15th overall gives Washington what it hopes to be a long-term solution at football's most important position. Trading back up into the first round to get pass rusher Montez Sweat and taking receiver Terry McLaurin in the third and offensive linemen Wes Martin and Ross Pierschbacher on Day 3 of the NFL draft filled some serious immediate voids.

"I know nothing's going to be handed to me and I'm just looking forward to getting to camp and learning as much as I can and earning my spot," Haskins said Saturday on the steps of the Jefferson Memorial. "I know the future is very important for this franchise, and I hope to be a big part of that."

Haskins will compete with veterans Case Keenum and Colt McCoy. Sweat will try to beat out third-year linebacker Ryan Anderson for a starting job and be a piece of replacing Preston Smith, who left for Green Bay in free agency.

"I'm a very quick learner," Sweat said. "I'm just ready to work how I can fit into the defense."

After beefing up on the defensive line with back-to-back Alabama first-round picks Jonathan Allen and Daron Payne the past two years, the Redskins put a focus on giving coach Jay Gruden more to work with on offense. Haskins and McLaurin played together at Ohio State, third-round running back Bryce Love is a potential long-term value coming off a torn ACL, and Martin and Pierschbacher will try to beat out veteran offensive lineman Ereck Flowers for the starting left guard job.

On Day 3, they also took North Carolina linebacker Cole Holcomb in the fifth round, big N.C. State receiver Kelvin Harmon in the sixth and James Madison cornerback Jimmy Moreland and Oklahoma State defensive end Jordan Brailford in the seventh. Six of their 10 picks were offensive players.

Love in the fourth round raised some questions given that Washington already has veteran Adrian Peterson, 2018 second-round pick Derrius Guice, 2017 fourth-rounder Samaje Perine and do-everything third-down back Chris Thompson. Love only caught 49 passes and had two receiving touchdowns in 49 games at Stanford; he'd like to be more of a dual threat in the NFL.

"We had a lot of different options as an offense," Love said. "Being able to go out and showcase that ability as well would definitely be big."

Better than expected after reports surfaced that owner Dan Snyder and President Bruce Allen had taken control of the first round. Snyder and Allen were enamored with Haskins and didn't have to trade up to get him because he fell in their lap and got someone they considered at No. 15 in Sweat at No. 26.

"We felt like we had a good chance (Haskins) would fall to us without having to give up the farm to get him," Gruden said. "Fortunately, that move paid off. Bruce did a great job, obviously (director of college scouting) Kyle Smith, Dan was in the room, for sure, and everybody's on board."

Finding a free safety to play alongside big-money free agent addition Landon Collins because Montae Nicholson's status is uncertain after being arrested in December. Gruden said he expects Nicholson to be available and brought up 2018 draft pick Troy Apke and special-teams ace Deshazor Everett as internal options.

"We have five pretty good safeties," Gruden said, adding that another possibility is adding a college free agent safety. Beyond that, the Redskins will be content to let roster battles play out in training camp.