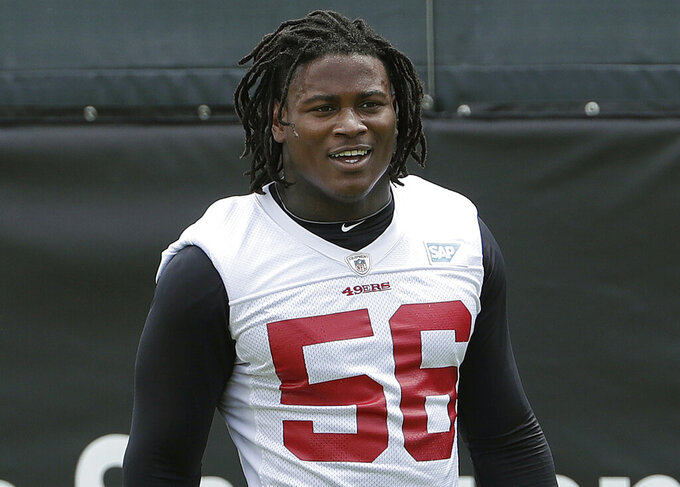 FILE - In this May 30, 2018, file photo, then-San Francisco 49ers linebacker Reuben Foster walks on the field during a practice at the team's NFL football training facility in Santa Clara, Calif. Foster has been fined two game checks and reinstated to the Washington Redskins’ active roster after an NFL investigation found he did not violate the league’s personal conduct policy. The league announced Foster’s punishment and new status Friday, April 12, 2019. (AP Photo/Jeff Chiu, File)

ASHBURN, Va. (AP) — Reuben Foster has been fined two game checks and reinstated to the Washington Redskins' active roster after an NFL investigation into an incident of domestic violence found he did not violate the league's personal conduct policy.

The league announced Foster's fine for two games this season and his new status Friday. Foster will be allowed to participate in all team activities, which includes Washington's offseason program that begins next week.

Foster avoided being suspended in the aftermath of a domestic violence charge from November, which triggered a review based on his previous violations of league policies. Prosecutors in Tampa, Florida, decided in January not to pursue a domestic violence case against the 25-year-old, dismissing the first-degree misdemeanor battery charge.

"Everyone in this league is held to a higher standard," Redskins President Bruce Allen said. "Reuben understands that his past actions have led a lot of people to doubt him, and he has committed to doing the work necessary to earn the trust of his teammates, our great fans, and the NFL."

Foster was arrested at the San Francisco 49ers' hotel in Tampa in November and jailed overnight following an incident involving the second-year linebacker and a companion police identified as the same woman who said Foster hit her in February. The woman later recanted the earlier allegations.

The 49ers released Foster, and the Redskins claimed him off waivers but acknowledged he might never play for them. He was placed on the Commissioner Exempt List after Washington added him and finished the season on it.

Foster is now cleared to return and play his first game since October.

"I am grateful to the Washington Redskins and the NFL for giving me this second chance," Foster said. "I accept the NFL's decision and want to say that I am truly sorry for my past actions and the people who may have been hurt by them."

The league says Foster acknowledged responsibility for his actions and has committed to a comprehensive accountability plan developed in conjunction with the NFLPA and the Redskins to avoid future incidents. Allen said the plan includes counseling, a living arrangement, weekly meetings with the team's player engagement director and chaplain, and some community service.

"We have been very clear with Reuben that his past does not have to determine his future — but the responsibility is squarely on him to change," Allen said. "Reuben must fully adhere to the plan we have developed for him. Reuben knows that we simply will not tolerate any future conduct that is detrimental to the Washington Redskins organization or to the NFL."

The league said it advised Foster that any future incidents will likely result in more substantial discipline. Foster has so far played 16 regular-season games for San Francisco after being a first-round pick in the 2017 draft.

"Going forward, I will follow the plan outlined for me and work hard to earn back the trust of my teammates, the NFL, NFL fans and the community," Foster said. "I know that my success is all up to me, and I am committed to not letting you down."